★ Can you beat a Level 100 Mewtwo? Get our firsthand account of our team's ultimate strategy!
・How to Beat Max Raid Mewtwo
★ Having trouble winning online? Find out where your team is lacking.
・Best Pokemon Tier List For Ranked Battle
★ If you're searching for a Ditto with high IVs or Pokemon with Pokerus, there's a board for that!
・Ditto / Pokerus Trading Board 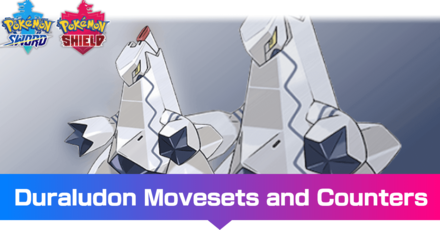 This is a strategy guide for using Duraludon in competitive play for the games Pokemon Sword and Shield. Read on for tips on the best Nature, EV spreads, Movesets, Builds, and Held Items to use with Duraludon, as well as its strengths and weak points.

How to Learn Duraludon's Egg Moves

Make up for its low Special Defense with Assault Vest

Duraludon boasts high Special Attack and Defense, but it's got a weak spot in its Special Defense. Assault Vest is useful for boosting its defensive capabilities and allowing it to take Special hits without a quick knockout.

While holding Assault Vest, the number of moves Duraludon can use effectively are accordingly limited. In addition to the STAB choices of Draco Meteor and Flash Cannon, Thunderbolt is useful for its super effective damage to Gyarados and other Water types, while Solar Beam is mostly used when Dynamaxed as its Max Move alternate Max Overgrowth.

Raise its Speed for a surprise attack

Duraludon is often seen as a slow, defensive attacker, but it's got surprisingly high speed, and with a Choice Scarf it's able to outspeed a surprisingly wide range of Pokemon. This build lets it outspeed Jolly Dragapult, Adamant Darmanitan with Choice Scarf, or even Jolly Gyarados with +1 stage in Speed.

How to Use Duraludon Effectively

A Special attacker with high Defense

Duraludon can serve a vital Special attacker role in your party. It can use the powerful Draco Meteor with STAB, and combined with its high Defense, it's a powerful threat in a metagame dominated by Physical attackers.

As a Dragon/Steel dual-type, Duraludon has only two weaknesses in the Fighting and Ground types. On top of that, it boasts a total of 10 type resistances. Although Dragon types are usually weak to Dragon and Fairy moves, Duraludon turns these into advantages, and with its Steel typing is able to handle the everpresent threats of Dragapult and Mimikyu.

Use a Special Attacker

Although Duraludon has a soaring Defense, its Base Special Defense is a pitiful 50. Combined with a middling HP, Duraludon isn't so durable when faced with Special attacks like Aura Sphere and Earth Power. That said, Duraludon can usually survive at least one hit when holding an Assault Vest, so be sure to hit hard to avoid taking heavy damage of your own.

Switching in a Pokemon who resists Dragon and Steel can turn the tides against Duraludon. On top of that, if you've got a Pokemon who can do Special damage, then you can make quick work of Duraludon.

Register as a member and get all the information you want. (It's free!)
Login
Opinions about an article or post go here.
Opinions about an article or post
We at Game8 thank you for your support.
In order for us to make the best articles possible, share your corrections, opinions, and thoughts about "Duraludon - Moveset & Best Build for Ranked Battle" with us!
When reporting a problem, please be as specific as possible in providing details such as what conditions the problem occurred under and what kind of effects it had.