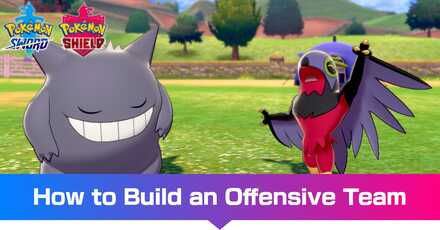 This page explains everything you need to know about offensive teams in Pokemon Sword & Shield. Read on to learn what an offensive team is, what strategies to use with one, and what countermeasures to use against one.

What is an Offensive Team?

This can take the form on a boost in team speed via Tailwind, setting up entry hazards like Stealth Rock, or boosting your team's defenses using Reflect and Light Screen.

The Importance of Leads

While these Pokemon are essentially sweepers on their own, they play a secondary supportive role by establishing early-game momentum for the rest of your team.

The Three Types of Leads

Below are examples of the three most common types of leads for Offensive Teams.

Giving Galvantula Focus Sash ensures it can set up Sticky Web to lower the opposing team's speed by one stage. Thanks to it's ability Compound Eyes, Thunder's accuracy is boosted, allowing it to threaten Defog users such as Mandibuzz and Corviknight.

Moxie and Dragon Dance allow Gyarados to sweep very early in the game, especially when it uses Dynamax. Giving it Lum Berry protects it from debilitating status moves, such as Thunder Wave and Will-o-Wisp.

How to Win with an Offensive Team

Hyper Offense teams require a good offensive core to succeed. You can achieve this by having strong physical and special sweepers that cover each other's offensive shortcomings.

Examples of offensive cores include:

Bisharp and Dragapult have great type synergy, easily covering each other's weaknesses by virtue of their typing and STAB Moves.

A high speed stat and access to U-turn allows Dragapult to quickly pivot to Bisharp when it encounters a check.

This Fire/Grass/Water Core has a naturally strong defensive synergy. Each Pokemon also has STAB moves that hit each other's common checks and counters for super-effective damage.

Heat Rotom can easily pivot to Barraskweda thanks to Volt Switch, who in turn can pivot back to its other teammates using Flip Turn.

Have a Dedicated Dynamax Pokemon

In Hyper Offense teams, Dynamax Pokemon provide secondary offensive utility through the use of Max Moves. These moves can set up weather, boost the party's stats, or even activate certain abilities.

Upon Dynamaxing, Hawlucha's Thunder Punch becomes Max Lightning, which sets up Electric Terrain for five turns. This also causes Hawlucha to consume its Electric Seed, giving it a +1 boost in Defense.

Hawlucha consuming its held item also activaves its Unburden ability, doubling its speed. All these positive stat changes happen on the turn it activates Dynamax!

Hawlucha can further support its teammates with Max Airstream, Max Knuckle, and Max Steelspike - boosting its own and ally Pokemon's speed, attack, and defense respectively.

Have a Dedicated Status Absorber

Status moves like Will-o-Wisp and Thunder Wave can easily shut down Hyper Offensive teams. Predicting these moves and switching into a dedicated status absorber allows your team to maintain offensive momentum.

Status absorbers are either unaffected by status moves or benefit from them. Examples include:

Guts allows Conkeldurr to absorb status moves like Will-o-Wisp, nullifying its effect and instead boosts its attack.

Magic Guard gives Alakazam immunity to status moves, including gradual damage from moves such as Toxic.

Lightning Rod allows Raichu to absorb Thunder Wave and Electric-type attacks, which in turn boosts its special attack by one stage.

How to Counter an Offensive Team

Turn their Speed Against Them

Because Hyper Offense teams often rely on fast sweepers, turning their speed against them using Trick Room is an effective strategy.

Dusclops' massive defenses, further boosted by Eviolite, allow it to stall offensive teams with support moves like Toxic and Will-o-Wisp after setting up Trick Room.

Hatterene becomes a power special sweeper after setting up Trick Room, wielding a plethora of coverage moves such as Dazzling Gleam, Psychic, and Mystical Fire - all boosted by its high special attack stat.

Disguise allows Mimikyu to survive a fatal hit, allowing it to easily set up Trick Room. It's also a powerful physical attacker that can further boost its attack stat with Swords Dance.

Although Hyper Offense teams are built to break down defensive teams, there are some defensive cores that can withstand their wallbreaking tactics.

The tried and tested FerroPex combo remains one of the toughest defensive cores to break down. Both Pokemon have high mixed defensive stats, access to reliable recovery such as Recover and Leech Seed, as well as a plethora of support moves.

Clefable works as a defensive pivot for the two main walls. Apart from absorbing status with Magic Guard, it can heal its teammates with Wish and cure status effects with Heal Bell.

In order for us to make the best articles possible, share your corrections, opinions, and thoughts about 「How to Build an Offensive Team | Best Hyper Offense Team | Pokemon Sword and Shield」 with us!