The Crown Tundra DLC has been confirmed for release on October 22nd! Don't miss the the full report!
★ Everything We Know About The Crown Tundra
★ New Moves for Returning Pokemon 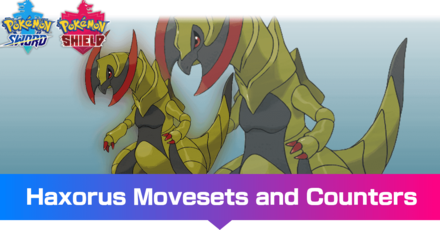 This is a strategy guide for using Haxorus in competitive play for the games Pokemon Sword and Shield. Read on for tips on the best Nature, EV spreads, Movesets, and Held Items to use with Haxorus, as well as its strengths and weak points.

This set lines up Haxorus with the Hapan Berry, allowing it to take half damage from Dragon-type moves. Its EVs are organized to allow it to take down Dragapult and Hydreigon in a head-to-head. Iron Tail serves as a solution for taking down Mimikyu, but it has a small chance of missing, so use it with care.

This set is made to outspeed the fastest possible Mimikyu, but for Mimikyu with 252 EVs in HP and Attack, it has a 37.5% chance of one-hit KOing with Iron Tail. It can faint a Dragapult and Hydreigon with 252 EVs in HP, but a slightly insufficient hitting power holds it back.

Haxorus is a Pokemon known far and wide for its massive base Attack. When holding a Choice Scarf, it can outspeed the likes of Galarian Darmanitan, and it mainly used as a lead Pokemon. By including the move Dual Chop, this set allows it to handle opponents with a Focus Sash. Its ability Mold Breaker has the excellent effect of letting it ignore Mimikyu's Disguise to strike directly.

How to Use Haxorus Effectively

Strike first for a one-hit KO

Haxorus's appeal lies not only in its high Attack power, but in the Speed it has to back it up. With a wide attacking movepool on deck as well, it's a strong attacker in every respect. It's not only capable as a lead Pokemon, putting the pressure on the opponent from the outset, but is also capable of switching in later in battle, making it a well-rounded player on any team. 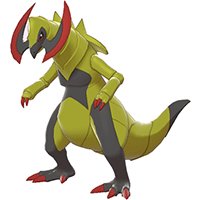 Use a Pokemon which can weather its hits

Although Haxorus is a Pokemon that can dish out heavy hits with its high Attack, it can be fully handled by a capable defensive Pokemon. Corviknight and Ferrothorn have a type advantage to resist all of Haxorus's main attacks, and which have recovery methods available. In the game of Pokemon, you can't lose if you don't faint, so Haxorus will find itself with little to do against these foes.

Outspeed it to hit super effectively

Haxorus has a high base Speed, but in the current metagame, there are plenty of contenders who can boast a far higher Speed. The everpresent threat Dragapult, on top of being a fellow Dragon type, has an incredible base Speed, allowing it to move first and show Haxorus who's top Dragon this generation. In addition to fast Pokemon, those which can hit first with priority moves can pose a threat.

Register as a member and get all the information you want. (It's free!)
Login
Opinions about an article or post go here.
Opinions about an article or post
We at Game8 thank you for your support.
In order for us to make the best articles possible, share your corrections, opinions, and thoughts about "Haxorus - Moveset & Best Build for Ranked Battle" with us!
When reporting a problem, please be as specific as possible in providing details such as what conditions the problem occurred under and what kind of effects it had.