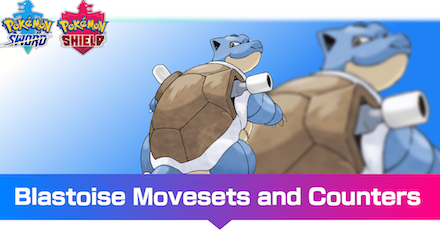 This is a strategy guide for using Blastoise in competitive play for the games Pokemon Sword and Shield. Read on for tips on the best Nature, EV spreads, Movesets, and Held Items to use with Blastoise, as well as its strengths and weak points. 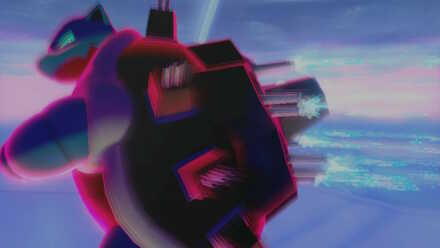 Blastoise makes an effective Dynamax sweeper thanks to access to one of the best boosting moves in the game, as well great Max Moves courtest of its high base power attacks.

Shell Smash is the crux of this set, boosting Blastoise' Attack, Special Attack, and Speed by 2 stages at the cost of lowering both of its Defense and Sp.Defense by 2 stages.This move also becomes Max Guard during Dynamax.

Ice Beam is its main coverage moves and allows Blastoise to hit Grass, Flying, and Dragon-types that are very common in the current metagame.

Hydro Cannon is its main STAB move and is best used during Dynamax to remove the recharge after successfully using the move, becoming Max Geyser.

Alternatively, you can Gigantamax Blastoise instead, with its Hydro Cannon becoming G-Max Cannonade. While this move doesn't generate Rain, it damages non Water-type Pokemon for 4 turns at the end of every turn instead.

Rounding off its coverage is Flash Cannon, which allows Blastoise to hit Fairy-types for super effective damage. It also has a 10% chance to lower the opponent's Special Defense stat.

We're using a simple EV spread with full investment in Sp.Atk and Speed so that Blastoise can hit as hard and as fast as possible. The remaining 4 EVs are placed in HP to round off its bulk.

Torrent is the preferred Ability for this Blastoise build. When Blastoise's HP drops to 1/3 of its maximum HP, it's Physical and Special Water-type moves increase in power by 50%.

Life Orb boosts the power of Blastoise's moves by 30% at the cost of recoil damage.

Focus Sash lets Blastoise survive a super effective hit and guarantees that it can get a Shell Smash boost on its turn. 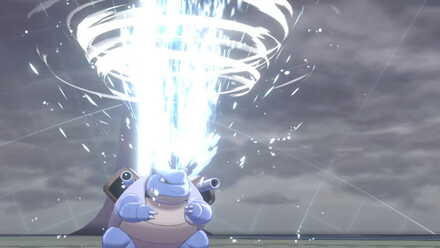 Water Spout is its strongest move, boasting a 150 Base Power when Blastoise is at full health. Thanks to the Speed boost it gets from Choice Scarf, it can outrun even Timid or Jolly Dragapult!

Surf is a weaker but more reliable Water-type STAB for late-game matches and if Blastoise has already suffered some damage. Ice Beam is its main coverage move, hitting Grass, Flying, and Dragon-types for super effective damage.

Dark Pulse is its last coverage move, hitting Psychic and Ghost-types for super effecitve damage. It also has a 20% chance to cause flinching, which works well in conjunction with Choice Scarf.

We're using a simple EV spread with full investment in Sp.Atk and Speed so that Blastoise can hit as hard and as fast as possible. The remaining 4 EVs are placed in HP to round off its bulk.

Torrent is the preferred Ability for this Blastoise build. When Blastoise's HP drops to 1/3 of its maximum HP, it's Physical and Special Water-type moves increase in power by 50%.

This build relies on Choice Scarf to ensure Blastoise can fire off strong Water Spouts. This item boosts Blastoise's Speed by 50% at the cost of being restricted to using only the initial move it used. 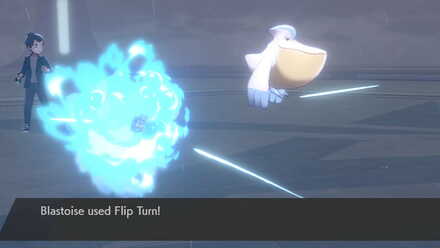 Blastoise's great mixed defense and solid Water-typing make it a great support Pokemon in Doubles, with Flip Turn giving it extra utility over other support Pokemon - essentially letting it function as a Defensive Pivot.

Fake Out has increased priority and causes the target to flinch, letting Blastoise scout moves and potentially break an opposing Pokemon's Focus Sash. Flip Turn is its pivoting move, dealing damage before switching out.

Blastoise' last two moves are for supporting it's teammate.

Life Dew heals Blastoise and its teammate by 25% of their max HP, ensuring that they both stay healthy during prolonged matches. Meanwhile, Helping Hand allows it to boost its teammate's next move by 50%.

We're using a mixed defensive EV spread with full investment in HP and 132 Def EVs and 120 Sp.Def EVs, with the remaining 4 EVs invested in Speed.

This support build benefits from Rain Dish, which heals Blastoise 1/16 of its Max HP at the end of every turn when Rain Dance or Drizzle is in effect.

We're using Sitrus Berry as it provides greater healing than Leftovers in Doubles.

Check out our article below to learn more about Sitrus Berries and Leftovers in Doubles.

Sitrus Berry vs Leftovers in Doubles

How to Use Blastoise Effectively

Use Shell Smash at the Start of the Battle

Blastoise is one of the few bulky attackers that have Shell Smash, so it's important that you use this boosting move at the start of the battle so that you can deal as much damage as possible to the opposing team.

Since this boosting move also increases Attack, your opponent may second guess your Blastoise and may struggle to switch into the right defensive Pokemon.

Blastoise has great mixed bulk and its Mono Water-typing gives it only two weakness - Grass and Electric.

Even with little to no defensive EV investment, Blastoise can withstand weaker attacks and stay in matches between opponents longer. It can also run defensive and supportive sets, allowing it to fill multiple roles in a party.

How to Build a Team with Blastoise

Blastoise great bulk and ability to run offensive and support builds make it a versatile Pokemon. While it faces stiff competition from stronger Water-types, it has a niche in more balanced teams - especially those that make use of a Grass-Fire-Water Core.

Access to Shell Smash and great natural bulk make Blastoise a great Dynamax or Gigantamax Lead for offensive teams. It's best used with Grass and Fire-types as these three cover each others weaknesses and gaps in coverage.

Blastoise fills the role of both lead and special attacked for this Grass-Fire-Water Team, with Incineroar filling the role of an Offensive Pivot while Rillaboom is a straightforward physical attacker.

Since it's partnered with a Fire-type Pokemon, it's best to Gigantamax Blastoise so that its Water-type moves becomes G-Max Cannonade and doesn't set up rain that can lower Incineroar's Fire-type moves.

Incineroar functions as an offensive pivot and deters Grass-types that can easily switch into Blastoise's moves.

Rillaboom on the other hand helps round off the gaps in coverage by providing strong, physical Grass-type moves. It also sets up Grassy Terrain with its Grassy Surge Ability, which is very useful for pure offensive teams since it recovers the team's HP at the end of every turn.

A Special Attacker for Rain Teams

Blastoise is also a great choice for special attacker in Rain Teams since it can heavily damage the opposing team with high-powered Water Spouts.

This balanced Rain Team relies on Pelipper to set up Rain Dance with its Drizzle Ability, with Blastoise filling the role of a Special Sweeper while Tornadus functions as an offensive pivot.

Blastoise works well with Tornadus as the latter helps deter Grass-types that can withstand even boosted Water Spouts.

Both Pokemon benefit from Pelipper's Rain, with Blastoise's Water Spouts getting a power boost while Tornadus' Hurricane gets 100% accuracy.

A Bulky Support Pokemon in Doubles

Access to utility moves such as Fake Out, Helping Hand, and Life Dew - on top of its great mixed defenses, make Blastoise a great support Pokemon in Doubles and is easy to fit into many types of teams.

In this sample team, we partner Blastoise with Dragonite who benefits from its Life Dew to keep it healthy and ensure that its Multiscale Ability stays active throughout the match.

Blastoise can also scout the opposing team using Fake Out, or boost Dragonite's power with Helping Hand. Since Double Battles are very fast paced, Dragonite often doesn't have a chance to boost with Dragon Dance, so the 50% boost from Helping Hand goes a long way!

Gengar and Togekiss are the backup sweeper and redirection support for this team respectively. Gengar also benefits from Blastoise's Life Dew since its Poison-typing lets it freely switch into Fairy-types that target Salamence.

Meanwhile, Blastoise can use Flip Turn to quickly pivot to Togekiss if Dragonite requires redirection support.
How to Build a Doubles Team 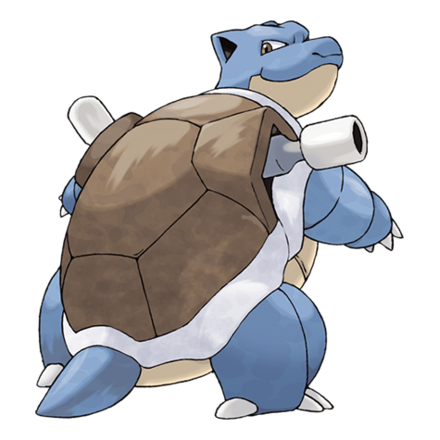 Overpower it With Super Effective Attacks

Although Blastoise has natural bulk, Pokemon that have a type advantage against it can easily force it out of the battle or even outright KO it if it tries to switch in.

Fortunately (and unfortunately for Blastoise), many top-ranking Pokemon in the current metagame are Grass and Electric-types.

Let Blastoise face fellow Water-type Pokemon so that it attacks will do low damage, or in some cases completely nullify it.

In order for us to make the best articles possible, share your corrections, opinions, and thoughts about 「Blastoise - Moveset & Best Build for Ranked Battle | Pokemon Sword and Shield」 with us!