How to Catch Legendary Pokemon | Pokemon Sword and Shield 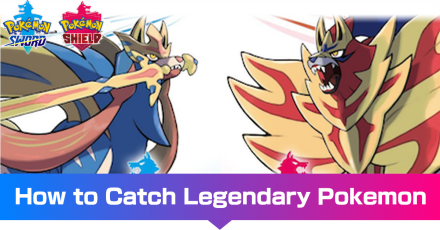 This page explains how to catch each of the Legendary Pokemon in the games Pokemon Sword and Shield. Read on for tips and strategies for catching Zacian, Zamazenta, and Eternatus, as well as new Legendaries Kubfu and Urshifu in the Isle of Armor.

List of Legendary Pokemon and How to Catch Them

Legendary Pokemon Available in the Base Game

The following Legendary Pokemon can be found in Pokemon Sword and Shield with no need for DLC or events. Unlike previous games in the series, there's no set of three Legendaries akin to the Legendary Birds or Legendary Dogs, marking the lowest in-game Legendary count of any generation.

Legendary Pokemon Available only via Events

New Legendary Pokemon in The Isle of Armor

The Isle of Armor DLC features a brand-new set of Legendary Pokemon, Kubfu and Urshifu, one of the very few evolution chains among Legendaries.

The Crown Tundra expansion, availble on the Expansion Pass DLC, was revealed to contain all Legendary Pokemon from previous games. New Galarian forms of Articuno, Zapdos, and Moltres were also announced.

How to Catch Eternatus

Can be obtained before battling the Champion

Eternatus is the last battle before facing with the Champion, and it is encountered directly after battling the Chancellor, the mastermind of the story of Pokemon Sword and Shield. Because you will be able to obtain Eternatus with any Poke Ball, simply choose a ball you like, and be sure to have it with you for the encounter.

How to Catch Zacian

Can be obtained after finishing the Story (Sword Exclusive)

Zacian can be obtained after completing the main Story. The quest to obtain Zacian as described above can be completed in about 3 hours. After defeating the Champion, the player will receive a Master Ball, so they will be able to obtain Zacian without fail.

How to Catch Zamazenta

Can be obtained after finishing the Story (Shield Exclusive)

Just like Zacian, Zamazenta can only be obtained after defeating the Champion and returning to the Slumbering Weald.

Which Legendary Pokemon Should You Choose? 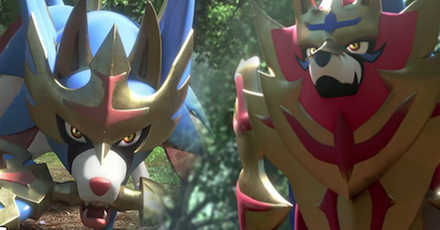 Which of the two representatives would you rather have in your party? Cast your vote below and let us know your favorite!

Introduction to the Legendary Pokemon

The Pokemon absorbing all the energy of the Galar Region

Eternatus is at Level 60 when it joins the player's team, which combined with its high Special Attack makes it a must-have for Max Raid Battles. As the Pokemon with the highest Base Stats attainable before the end of the Story, Eternatus is a Pokemon you'll definitely want to have as a constant member of your team.

The Pokemon with a shining sword to slice through anything, Zacian 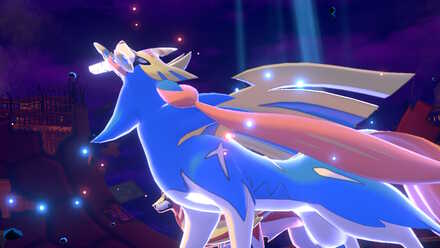 Zacian attacks so gracefully that its movements can even captivate its opponents. It holds what appears to be a sword in its mouth.
Source: Official Site

Zacian eminates a gallant and refined aura suited to the knightly image of the sword, and as such fills the part as the mascot of Pokemon Sword. There is a high chance that Zacian will only appear in Pokemon Sword, so for those who want to capture Zacian, Pokemon Sword just might be the choice for you.

When given a Rusted Sword, Zacian will transform into its Crowned Sword Form, and become a Fairy/Steel dual-type Pokemon. With Fire and Ground as its only weaknesses, and a host of resistences provided by the Steel type, Zacian becomes a defensively powerful player.

The Pokemon with a glistening shield to reflect all attacks, Zamazenta 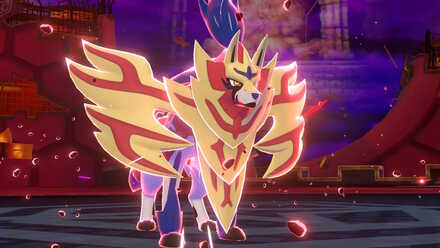 Zamazenta’s regal and majestic movements overwhelm any opponents that dare face it. Its body is covered in what seems to be a shield.
Source: Official Site

Zamazenta's body is completely covered in a giant shield. This truly is an appearance worthy to serve as the mascot of Pokemon Shield. Zamazenta is only available in Pokemon Shield, so for those who want to capture Zamazenta, Pokemon Shield would be the best option to purchase - assuming you don't have a friend who is willing to part with theirs!

When given a Rusted Shield, Zamazenta will transform into its Crowned Shield Form, and beocome a Fighting/Steel dual-type Pokemon. It gains a sizable stat boost in both Defense and Special Defense, making Zamazenta no easy feat to take down.

Post (1 Comments)
Opinions about an article or post go here.
Opinions about an article or post
We at Game8 thank you for your support.
In order for us to make the best articles possible, share your corrections, opinions, and thoughts about "How to Catch Legendary Pokemon" with us!
When reporting a problem, please be as specific as possible in providing details such as what conditions the problem occurred under and what kind of effects it had.