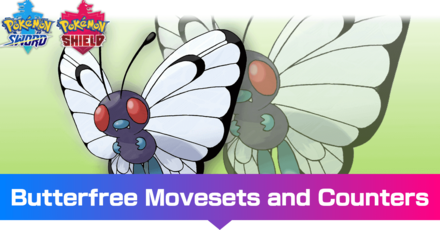 This is a strategy guide for using Butterfree in competitive play for the games Pokemon Sword and Shield. Read on for tips on the best Nature, EV spreads, Movesets, and Held Items to use with Butterfree, as well as its strengths and weak points. 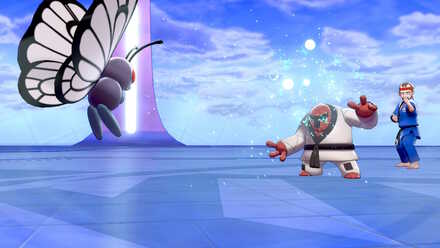 The technique is to send the opponent to sleep with Sleep Powder. Although it has 75% accuracy, it will be boosted by Butterfree's Ability Compound Eyes. You can then set up raising your Sp. Atk, Sp. Def, and Speed, one stage each, with Quiver Dance.

Although this is a powerful technique, Butterfree does not have high Speed stat in the first place and this strategy could fail, so it is important to set up a situation where you can do this safely. 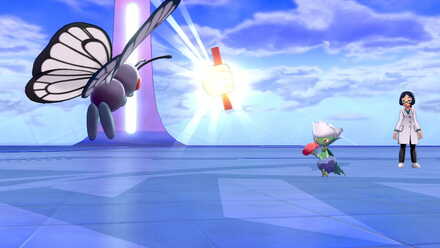 After using Quiver Dance to boost Butterfree's stats, use Baton Pass to pass the stat changes to the next Pokemon. This strategy relies on the ace Pokemon to be switched out. Use this strategy wisely, because if your ace Pokemon fails, it will be over for Butterfree because it does not have any offensive moves.

The setup for this is the same as the strategy above. Put your opponent to sleep with Sleep Powder, raise stats with Quiver Dance, and switch out to your ace Pokemon with Baton Pass and let it sweep the stage. Again, be careful in setting this up.

Recommended Pokemon for Switching Out with Baton Pass

How to Use Butterfree Effectively

Use the Compound Eyes Ability

Butterfree's Compound Eyes Ability sets itself apart from other relatively mediocre Bug-types in the metagame. With this Ability, Butterfree has an increased chance to land powder moves such as Sleep Powder, Stun Spore, and Poison Powder..

While it can't outright KO an opposing Pokemon or withstand its attacks, it can still support its team by providing a potentially crippling status.

Use it as a Baton Pass Lead

Butterfree is one of the few Pokemon with a powerful boosting move in Quiver Dance that can also use Baton Pass.

While chain passing boosts is now a riskier strategy, it's far from a gimmick as passing just one Quiver Dance boost is enough to turn the tide of the battle - provided that you pass it to the right Pokemon!

How to Build a Team with Butterfree

Butterfree has a niche in the current metagame but has a lot of competitors for a spot as a utility Pokemon. As such, it's' best played to its strengths so that it doesn't become dead weight for the team.

While it doesn't have the same offensive prowess as Volcarona, Butterfree is a reliable setup sweeper as it can threaten potential checks with a Compound Eyes boosted status move.

Butterfree's role is to get a Quiver Dance boost as soon as possible, after which it can fire off boosted Hurricanes or cripple a potential check or wall with Sleep Powder.

Butterfree is very susceptible to priority moves as it bypasses the speed boosts it gains.Tapu Lele is a great teammate for Butterfree, with its Psychic Surge setting up Psychic Terrain that blocks priority moves.

Garchomp rounds off this offensive team by providing a strong physical preference. It's best sent out when Butterfree manages to cripple an opposing Pokemon with Sleep Powder or a confusion from Hurricane.

Butterfree is one of the few Pokemon with both Quiver Dance and Baton Pass, making it an effective Baton Pass Lead.

Butterfree's main goal is to get as many Quiver Dance boosts as it can, and then Baton Pass it to Gardevoir. The Embrace Pokemon is a great recepient as not only does it have Stored Power and great speed, it has Moonblast to cover its Psychic STAB's shortcomings.

Toxapex rounds off this defensive team, filling the role of an all-purpose wall and can dissuade phazers by threatening them with Toxic.

Outspeed it Before it Uses Quiver Dance

Despite Butterfree's threat of status and Quiver Dance, it's very frail and its Speed stat before any boosts is mediocre at best. As such, it is relatively easy to knock out - even at the start of the battle, when facing a faster and stronger sweeper.

Butterfree makes heavy use of status moves to differentiate itself from other setup sweepers. This makes it susceptible to Pokemon who are immune to said moves or can cripple it with its own status moves!

Post (0 Comments)
Opinions about an article or post go here.
Opinions about an article or post
We at Game8 thank you for your support.
In order for us to make the best articles possible, share your corrections, opinions, and thoughts about "Butterfree - Moveset & Best Build for Ranked Battle" with us!
When reporting a problem, please be as specific as possible in providing details such as what conditions the problem occurred under and what kind of effects it had.