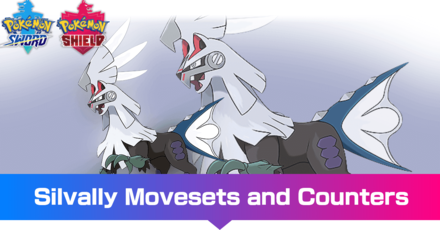 This is a strategy guide for using Silvally in competitive play for the games Pokemon Sword and Shield. Read on for tips on the best Nature, EV spreads, Movesets, and Held Items to use with Silvally, as well as its strengths and weak points. 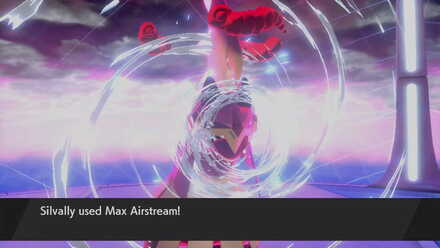 Silvally's wider special movepool make a special attacking set more attractive as it has plenty of coverage moves to choose from. The Synthetic Pokemon, however, has a relatively low Special Attack stat so it's best used as a back-up special sweeper.

Air Slash is a Flying-type move that has a 30% chance to cause flinching. It also becomes Max Airstream during Dynamax, allowing Silvally to support it's team by boosting their speed by 1 stage.

Thunderbolt and Flamethrower are its main coverage moves, allowing it to hit a majority of the metagame for super effective damage. The move combo also prevents Silvally from the common Water-Grass Defensive core popularized by Toxapex and Ferrothorn.

Flash Cannon rounds up Silvally's coverage, giving it a strong super-effective move against the common Fairy and Rock-type Pokemon that plague the metagame.

We're using a standard special attacking EV spread with full investment in Special Attack and Speed EVs to ensure that Silvally hits as hard and as fast as possible with its special attacks with a Timid Nature. The remaining 4 EVs are allocated in HP to round off its great mixed bulk.

RKS System is Silvally's only Ability, which allows it to change its type depending on the memory it's holding.

Silvally has a few options for held items for this build.

You can give it any of the memories to change its typing using the RKS System, with the Flying Memory, Electric Memory, and Fire Memory giivng it STAB on Air Slash, Thunderbolt, and Flamethrower respectively.

Alternatively, you can give it Life Orb to give it a 30% power boost to all of its attacks at the cost of Silvally taking recoil damage and staying as a Normal-type. 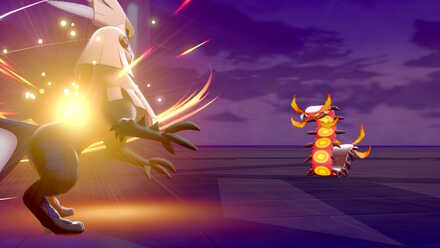 Multi-Attack is Silvally's strongest move - a 120 Base Power physical attack that changes type depending on the memory the Synthetic Pokemon is equipped with.

Iron Head is a powerful Steel-type move that has a 30% chance to cause flinching and is Silvally's main coverage move against Fairy and Rock-type Pokemon. U-Turn is its main pivoting move, allowing it to quickly switch out to a partner while also inflicting damage.

It's last coverage move is Crunch and allows the Synthetic Pokemon to hit Psychic and Ghost-type Pokemon. It also becomes Max Darkness during Dynamax, which lowers the team's Special Defense by 1 stage.

Note: While this physical attacking Silvally can't make use of it, it allows the Synthetic Pokemon to soften the opposing team for your own special attackers.

We're using a standard special attacking EV spread with full investment in Attack and Speed EVs to ensure that Silvally hits as hard and as fast as possible with its special attacks with a Jolly Nature. The remaining 4 EVs are allocated in HP to round off its great mixed bulk.

RKS System is Silvally's only Ability, which allows it to change its type depending on the memory it's holding.

Silvally has a few options for held items for this build.

You can give it any of the memories to change its typing using the RKS System, with Fairy Memory standing out as one of the best since it turns Multi-Attack into a 120 Base Power STAB physical Fairy-type move with 100% accuracy.

Alternatively, you can give it Life Orb to give it a 30% power boost to all of its attacks at the cost of Silvally taking recoil damage and staying as a Normal-type.

How to Use Silvally Effectively

A Versatile and Well-Balanced Sweeper

Silvally is a well-balanced Pokemon that boasts Base 95 on all of its stats and the ability to learn many physical and special moves to round off its coverage.

It's RKS System ABility also allows you to change its typing depending on the memory, making it easy to fit into many teams.

It's a Pokemon that can play many roles and often fills the spot of a backup physical and special sweeper for a team - especially if you're lacking in a certain coverage.

Determine its Role in Your Team

Silvally is a versatile Pokemon but its 95 Base stats across the board is widely considered mediocre - especially in the current metagame filled with hard-hitting Pokemon.

As a result, it's important to define what role Silvally plays in your team in to maximize its potential. As previously mentioned, it works best when it plays the role of a backup attacker or a pivot that supports its team using its coverage moves.

Use Memories that Give it Resistances or Immunities

Fairy, Electric, and Flying-type Silvally are the top three best types for Silvally and is activated when you equip it with the Fairy Memory, Electric Memory, and Flying Memory respectively.

Why Use Fairy-type Silvally?

Fairy gives Silvally resistances to Bug, Dark, and Fighting, and an immunity to Dragon-type moves at the cost of a weakness to Steel and Poison-type moves.

A Fairy-type Silvally also has the strongest physical Fairy-type STAB in Multi-Attack, boasting 120 Base Power.

Physical Fairy-type moves are rare, with Play Rough and Spirit Break being the only other options - the former having 90% accuracy while the latter is restricted to Grimmsnarl.

Why Use Electric-type Silvally?

Electric gives Silvally resistances to Electric and Flying-type moves, while only giving it a weakness to Ground-type moves.

An Electric-type Silvally also has one of the strongest physical Electic-type STAB in Multi-Attack, boasting 120 Base Power. Strong, physical Electric-types that lack recoil are rare, so this Silvally has a niche in balanced and Mono-Electric teams.

Why Use Flying-type Silvally?

Flying gives Silvally resistances to very common Bug, Fighting, and Grass-type moves and an immunity to Ground-type moves. This comes at the cost of key weaknesses to equally common Rock, Ice, and Electric-type moves however.

A Flying-type Silvally also has one of the strongest physical Flying-type STAB in Multi-Attack, boasting 120 Base Power. While Brave Bird has the same base power and Sky Attack is stronger at 140 Base Power, these moves inflict recoil damage or require charging respectively.

Flying-type Silvally also has a niche as a Dynamax Lead, with its Flying-type Multi Attack becoming a strong Max Airstream that boosts it and its team's speed by 1 stage.

How to Build a Team with Silvally

Silvally's versatility and ability to fill different attacking roles make it a great choice for balanced teams, as well as more offensive-oriented teams that lack key coverage moves that the Synthetic Pokemon can fill with its RKS System and Multi-Attack.

Access to both U-Turn and Parting Shot allow Silvally to fill the role of an offensive pivot that can quickly pivot to its teammates while providing valuable coverage with its attacks.

The following teams show some examples of ways in which Silvally can be effectively used in a team for Ranked Battle.

Special Attacking Silvally's access to Parting Shot allow it to quickly pivot between its teammates, lowering the opposing Pokemon's Attack and Special Attack by 2 stages to soften their attacks and ensure that Galarian Zapdos and Naganadel can safely switch in.

For this team, Galarian Zapdos serves as the team's Lead Dynamax user while Naganadel fills the role of a special sweeper.

Since Naganadel is limited to using Dragon and Poison-type moves, Silvally should have moves that round off the team's special coverage. These include the moves Flamethrower or Focus Blast to handle Steel-types, or Surf to hit Ground-types.

Depending on your choice of main coverage move, Silvally should use the respective RKS Memory to give it STAB on its special attacks.

Physical Attacking Silvally uses U-Turn to quickly pivot between its teammates, while Dragonite functions as the Lead Dynamax user and Heatran providing valuable special coverage to hit the two's checks and counters.

Heatran rounds off the coverage by providing valuable Fire-type STAB to hit opposing Steel-types that can threaten Silvally.

Learn more about building Hyper Offense teams by checking out our full guide below.
How to Build an Offensive Team | Best Hyper Offense Team 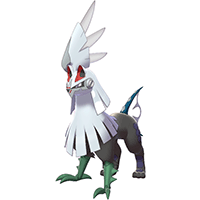 Counter it with Defensive Pokemon

Although Silvally is often unpredictable, it's balanced but rather mediocre attacking stats mean that it struggles against bulky and defensive Pokemon.

Once you identify an opposing Silvally's typing, it's easy to counter and force out with the right Pokemon that has resistances to its chosen type.

Register as a member and get all the information you want. (It's free!)
Login
Opinions about an article or post go here.
Opinions about an article or post
We at Game8 thank you for your support.
In order for us to make the best articles possible, share your corrections, opinions, and thoughts about "Silvally - Moveset & Best Build for Ranked Battle" with us!
When reporting a problem, please be as specific as possible in providing details such as what conditions the problem occurred under and what kind of effects it had.