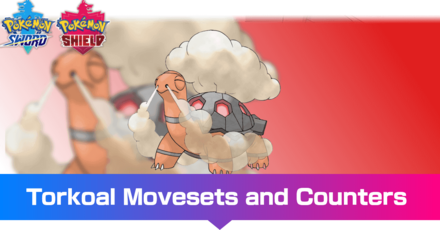 This is a strategy guide for using Torkoal in competitive play for the games Pokemon Sword and Shield. Read on for tips on the best Nature, EV spreads, Movesets, and Held Items to use with Torkoal, as well as its strengths and weak points. 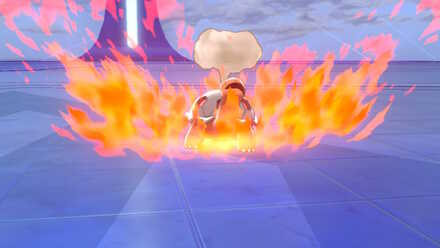 This set revolves around dealing out full power Overheats in the sun. Otherwise, Torkoal can use Body Press as a Fighting-type coverage move that will be based off its' great defenses, and he can also provide utility through Yawn or Stealth Rock.

Drought allows Torkoal to set the sun upon switching in. This is vitally important as a member of a sun-team, but also provides boosts to his own Fire-type moves while elminating his Water-type weakness.

Eject Pack works by switching out the user when their stats are lowered. This includes self-induced stat drops. This allows Torkoal to come in, set the sun, and fire off a full-powered STAB, sunlight-boosted, Overheat deal damage, then switch back out to regain the stat drops. 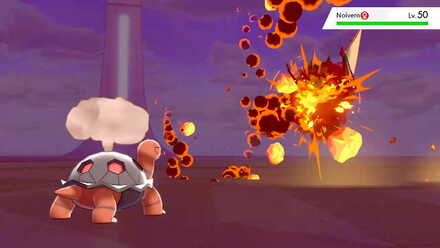 There are few Pokemon who can outspeed Torkoal under Trick Room. With it set up, Torkoal can deal absurd amounts of damage from full HP thanks to a STAB, sun-boosted, Choice Specs Eruption.

Earth Power also serves as a ground-type coverage move, while Flamethrower can be used when Torkoal takes some damage and Eruption won't be as strong as it could be.

This moveset uses a bulky special attacking set with maximum investment in HP and Sp.Atk. The remaining EVs may be placed in Defense.

Choice Specs is the ideal item of choice to deal the most damage possible. However, Charcoal is also a solid option to give you freedom of choice at the expense of raw firepower.

How to Use Torkoal Effectively

Weather Support thanks to Drought

Torkoal's Drought Ability makes it a must-have on most sun-teams. Drought gives fire-types a boost to their attacking moves, while lowering the damage-received from water-type moves.

Among other things, Torkoal also works well as a support thanks to its access to moves like Stealth Rock, Yawn, and Will-o-wisp. Partner this with Torkoal's high natural bulk and we can see how he fits well as a bulky support.

Since Torkoal has a really low speed stat, this makes it hard to outspeed in Trick Room. When attacking from full HP, Torkoal can deal absurd amounts of damage thanks to a STAB, sun-boosted, Eruption.

How to Build a Team with Torkoal

Weather Setter for a Sun Team

Torkoal serves as the weather setter for this team while also providing support via Stealth Rock. Venusaur benefits a lot as a Special Sweeper thanks to its synergy with the sun and its ability Chlorophyll.

These two work well together as Venusaur can cover Torkoal's weaknesses well. Cinderace can fill in the last spot as a versatile member thanks to Libero.

Torkoal, and teams with Torkoal tend to heavily rely on weather to build their path to success. By bringing in members who can easily switch the weather, it can disrupt not only Torkoal's strategy, but even the entire team.

Use Ground or Rock-types

As bulky as Torkoal may be, he doesn't really have any reliable forms of recovery. By facing Torkoal against strong Ground/Rock types, Torkoal will sooner or later still fall against them.

Register as a member and get all the information you want. (It's free!)
Login
Opinions about an article or post go here.
Opinions about an article or post
We at Game8 thank you for your support.
In order for us to make the best articles possible, share your corrections, opinions, and thoughts about "Torkoal - Moveset & Best Build for Ranked Battle" with us!
When reporting a problem, please be as specific as possible in providing details such as what conditions the problem occurred under and what kind of effects it had.