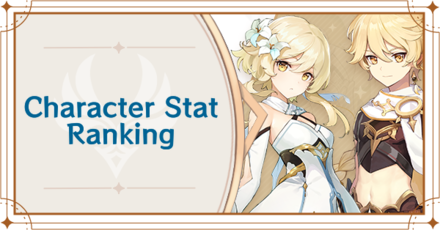 This is a ranking of all character stats in Genshin Impact. Check out which characters have the highest and lowest base attack, defense, HP and ascension stats!

The HP, ATK, and DEF stats provided in the Stats Ranking table are the raw stats and do not include any buffs provided by Character Ascension stats such as ATK% bonuses.

The Ascension Stats provided are the stats attained at level 80 after the final ascension and the character level cap increased to 90.

Register as a member and get all the information you want. (It's free!)
Login
Opinions about an article or post go here.
Opinions about an article or post
We at Game8 thank you for your support.
In order for us to make the best articles possible, share your corrections, opinions, and thoughts about "Character Stat Ranking" with us!
When reporting a problem, please be as specific as possible in providing details such as what conditions the problem occurred under and what kind of effects it had.