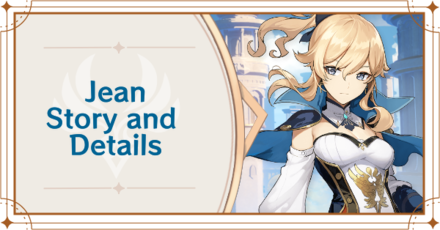 Jean is a character in Genshin Impact. Learn about Jean's story, background, birthday, and history in this complete story profile!


When Grand Master Varka of Mondstadt's Knights of Favonius left on an expedition his role passed to Jean, the eldest daughter of House Gunnhildr. The young Acting Grand Master had become a skilled swordswoman through hard work and works harder still for the sake of the Knights. Self-sacrifice, after all, is the Dandelion Knight's path.
Source: Dainsleif, The Bough Keeper

Jean is respected by the people of Mondstadt and is thought of as a reliable person. Yet she often feels pressured by her position as acting Grand Master and strives to be like Vannessa, The Liberator of Mondstadt, Founder of the Knights of Favonius and first Dandelion Knight.

Jean is the older sister of the Favonius Church Deaconess Barbara Page. After Jean's parents split apart, she took after her mother and was trained in the ways of knighthood befitting those of the noble Gunnhildr Clan of Mondstadt and achieved the title of Dandelion Knight at the age of 15. Meanwhile, her sister Barbara took after her father, the Cardinal of Daybreak, and became clergy.

Since their family's split Jean and Barbara have a friendly but distant relationship.

The Church of Favonius

Register as a member and get all the information you want. (It's free!)
Login
Opinions about an article or post go here.
Opinions about an article or post
We at Game8 thank you for your support.
In order for us to make the best articles possible, share your corrections, opinions, and thoughts about "Jean Story and Details" with us!
When reporting a problem, please be as specific as possible in providing details such as what conditions the problem occurred under and what kind of effects it had.