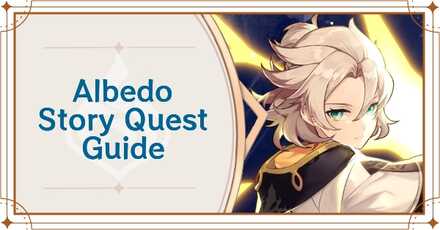 The Princeps Cretaceus Chapter is Albedo's Story Quest in Genshin Impact. Learn how to unlock this Quest and where it is found, as well as its rewards and a full walkthrough for completing the Quest.

During The Chalk Prince and the Dragon Event

After The Chalk Prince and the Dragon Event

You arrive at Timaeus' alchemy store in Mondstadt one day to stock up on adventuring supplies. But here, you encounter someone altogether unexpected...

The Genius Researcher and the Seed of Another World

While searching for Albedo, you encounter and odd-looking nun named Rosaria. She claims to know where Albedo is and expresses her willingness to show you the way.

The Genius Researcher and the Seed of Another World Objectives

After finding Albedo, Rosaria leaves on her own. You chat with Albedo and discover the objective of his research: to use alchemy to cause a seed from another world to sprout and flourish. To better understand otherworldly lifeforms, Albedo states his desire to observe you and to perform some experiments in the process.

The Second Experiment: The World

After the experiment begins, Albedo first checks your elemental flow. The result is that both your internal and external elemental flows run smoothly and that there is nothing unusual about them. These results seem very normal indeed, but according to Albedo, this is something to be happy about.

The Second Experiment: The World Objectives

After the elemental flow tests, Albedo asks you to display any special, otherworldly abilities you may have, though nothing comes of this. Still, Albedo's interest in you has not waned in the least...

As the experiments proceed, Albedo obtains more and more data related to you, and the alchemy he envisages begins to take shape. Finally, after a simple test of your physical capabilities, the experiments draw to a close...

Using the Pyro element can help stave off the Sheer Cold debuff too.

To the south of the mechanism are two Seelie Nests. You can use Elemental Sight to find which direction the Seelie are.

One of the Seelie's is on a nearby cliff, while the other in on a ruin pillar in the water.

Activate the Mechanisms with the Seelie

To the north of the mechanism are two Seelies and 5 monuments you need to activate. The monuments are activated if a Seelie passes nearby.

You will need timing when following the Seelie, so that before the monument deactivates again, the second Seelie will activate it again.

Register as a member and get all the information you want. (It's free!)
Login
Opinions about an article or post go here.
Opinions about an article or post
We at Game8 thank you for your support.
In order for us to make the best articles possible, share your corrections, opinions, and thoughts about "Albedo Quest Guide | Traveler Observation Report Story Quest Walkthrough and Rewards" with us!
When reporting a problem, please be as specific as possible in providing details such as what conditions the problem occurred under and what kind of effects it had.