Haran Geppaku Futsu Stats, Skill, How to Get | Genshin Impact 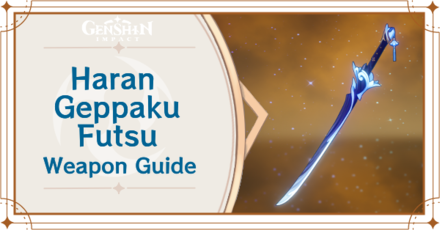 To gain the max possible buff, switch and use your party members' Elemental Skills twice, then return to the character equipped with Haran Geppaku Futsu.

How to Get Haran Geppaku Futsu

Wish on the Weapon Banner in Version 2.6 - Phase 1 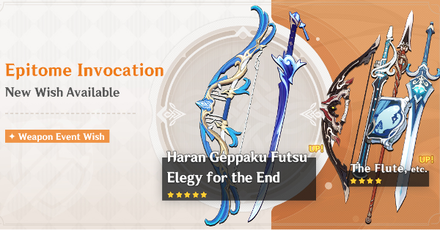 The Haran Geppaku Futsu is currently unavailable in the Epitome Invocation Wish Weapon Banner. The last rerun of the banner was on March 30, 2022 until April 20, 2022.

As this is an Event-Wish exclusive weapon, you cannot get Haran Geppaku Futsu by any other means.

The Haran Geppaku Futsu's ability to increase Normal Attack damage sounds great for Ayato, who seems to rely heavily on Normal Attacks for damage. We'll update this with a fuller list once we've done some testing!

Materials Needed for Each Level

The Gloomy Statuettes are part of the new Statuette series that include the Dark Statuette and the Deathly Statuette. These are new weapon ascension materials that Abyss Lectors, Abyss Heralds, and Black Serpents that dropped in Version 2.6!

See more comments (14 Comments)
Opinions about an article or post go here.
Opinions about an article or post
We at Game8 thank you for your support.
In order for us to make the best articles possible, share your corrections, opinions, and thoughts about "Haran Geppaku Futsu Stats, Skill, How to Get" with us!
When reporting a problem, please be as specific as possible in providing details such as what conditions the problem occurred under and what kind of effects it had.