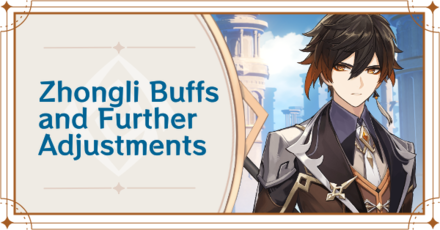 Dominus Lapidis will now trigger all nearby Geo energy and cause the following effects.

The DMG dealt by Zhongli's attacks will now increase depending on his maximum HP.

Shields will have an additional 15% durability. Additionally, characters protected by shields will get a 15% DMG increase, dealing DMG to enemies will also decrease their Geo RES by 20% for 15s.

Geo Shields are now adjusted from: having 250% Geo DMG Absorption to having 150% Physical DMG and Elemental DMG Absorption.
Affected Effects Include:

Register as a member and get all the information you want. (It's free!)
Login
Opinions about an article or post go here.
Opinions about an article or post
We at Game8 thank you for your support.
In order for us to make the best articles possible, share your corrections, opinions, and thoughts about "Zhongli Buffs and Further Adjustments" with us!
When reporting a problem, please be as specific as possible in providing details such as what conditions the problem occurred under and what kind of effects it had.