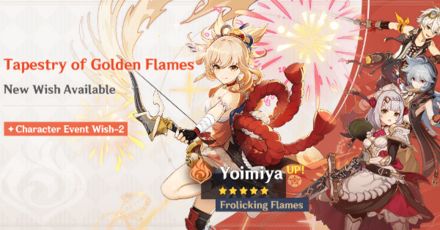 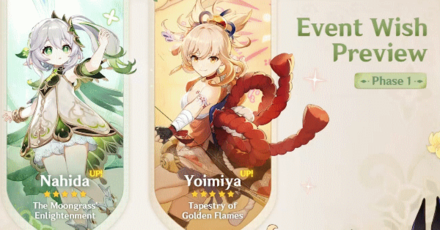 Yoimiya's banner was previously available last November 2, 2022, until November 18, 2022. Her banner ran alongside Nahida's banner throughout Phase 1 of Version 3.2.

Banner Start and End Date for All Servers

Which 3.2 Banner Are You Pulling On?

Is Yoimiya's Banner Worth It?

Should you Pull on Yoimiya's Banner?

If you want a Bow-User that can easily defeat Bosses, then it's worth pulling for Yoimiya! She can trigger Elemental Reactions easily, and also buff the team after using an Elemental Burst.

The rate up 4-Star Characters for Phase 1 are Razor, Bennett, and Noelle!

The Tapestry of Golden Flames Wish banner includes all standard 5-star and 4-star characters except for Heizou. You cannot get any 5-star event characters from Yoimiya's banner other than Yoimiya.

There is a 50% chance to pull the featured 5-star character on your first 5-star pull. If you get a different 5-star on the Tapestry of Golden Flames banner, your next 5-star pull is guaranteed to be Yoimiya.

Past Yoimiya Banners and Reruns

In order for us to make the best articles possible, share your corrections, opinions, and thoughts about 「Yoimiya Banner Release Date and 4-Star Characters | Genshin Impact」 with us!