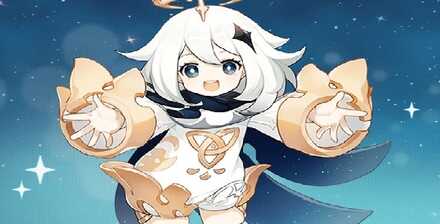 This is a news article about the issue regarding Genshin Impact's spyware behavior. Team MiHoYo has made a public reply for this issue, so to learn more about the game's state, read on.

As of September 29th, the Spyware issue has been resolved and the game updated to reflect this:

This issue has now been resolved. The game's anti-cheat program will immediately end once the game client is closed or uninstalled. We sincerely apologize for any inconvenience caused by this issue. We will do our utmost to prevent such issues from occurring again in the future, and will continue optimizing our workflow to bring the highest-quality gaming experience possible to all of our Travelers.
Source:About Our Anti-Cheat System (Updated)

Anyone who was previously having issues with the anit-cheat system in place should update their game and get back to playing!

Anti Cheat System Is Placed To Ensure No One Cheats

miHoYo's official statement addresses concerns that a given process does not shut down after the software has been closed. The reasons given include that the process is used for anti-cheat purposes, and that it is necessary to run even while the program is closed to prevent the use of external cheating plugins.

However, due to players' concerns, miHoYo has stated that they will make an update to the game's code in the coming days to prevent the anti-cheating process from running while the game is closed.

There have been several rumors regarding the game being a spyware from team MiHoYo. The compay has made a public reply via their official facebook group. 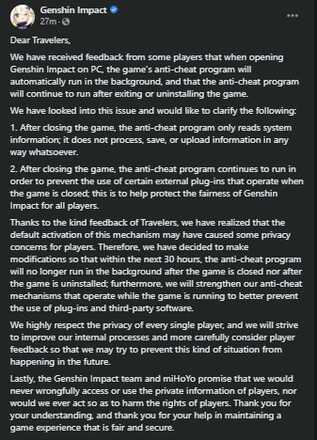 Thanks to the kind feedback of Travelers, we have realized that the default activation of this mechanism may have caused some privacy concerns for players. Therefore, we have decided to make modifications so that within the next 30 hours, the anti-cheat program will no longer run in the background after the game is closed nor after the game is uninstalled; furthermore, we will strengthen our anti-cheat mechanisms that operate while the game is running to better prevent the use of plug-ins and third-party software.

We highly respect the privacy of every single player, and we will strive to improve our internal processes and more carefully consider player feedback so that we may try to prevent this kind of situation from happening in the future.

Lastly, the Genshin Impact team and miHoYo promise that we would never wrongfully access or use the private information of players, nor would we ever act so as to harm the rights of players. Thank you for your understanding, and thank you for your help in maintaining a game experience that is fair and secure.

Register as a member and get all the information you want. (It's free!)
Login
Opinions about an article or post go here.
Opinions about an article or post
We at Game8 thank you for your support.
In order for us to make the best articles possible, share your corrections, opinions, and thoughts about "Spyware Issue and Official Response" with us!
When reporting a problem, please be as specific as possible in providing details such as what conditions the problem occurred under and what kind of effects it had.