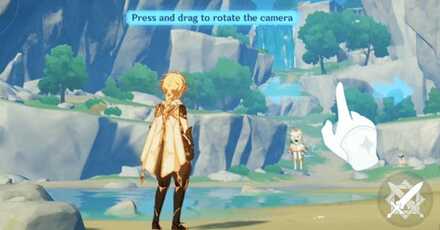 Genshin Impact is available on both console and mobile platforms, with two very different styles of play. Find out everything you need to know about all the differences between the two versions and the advantages and disadvantages of each.

Differences between the Mobile and Console Versions

NOTICE: This article's content is based on beta testing of the PS4 and mobile versions of the game only. We'll update with information on the PC version of the game once it has been confirmed.

From the ground up, the control schemes of the mobile and console versions of the game are entirely different. While the PS4 version uses its controller with buttons and control sticks to move, aim, select, and more, these functions are all performed with taps on the screen in the mobile version.

While the mobile version's touch-oriented gameplay allows for easy and intuitive selection of commands, the PS4 version's potential for using buttons and control sticks simultaneously allows for easier execution of more complicated maneuvers.

The Bow's Sensitivity is Higher on PS4

The Bow weapon in the game uses an aim and fire mechanism. However, aiming this bow proves more difficult in the mobile version, as the smallest units of variation are wide and disallow subtle targeting adjustments.

On the other hand, in the PS4 version, it's easy enough to slightly move the control stick to achieve the perfect position, allowing for precision-based sniping.

Unobtained Items can be Examined on Mobile

Due to the difference in controls, the method for selecting items on menus also varies between the mobile and console versions. On mobile, you can simply tap to confirm an item's information, while on PS4, you have to aim the cursor and click it.

As the cursor cannot be used on some menus on PS4, players on PS4 are unable to check information on how to obtain an item they have not previously found. Mobile users will be able to simply tap the screen on these menus to access the information. It's possible that this issue will be fixed in future updates.

Graphics Settings can be Changed on Mobile

It's possible to change the graphical settings in the mobile version of the game. However, on PS4, users are locked to a single graphics setting.

This provides mobile users with the option to decrease the quality of the graphics in exchange for shorter load times.

A core feature of the combat system involves using Elemental Bursts, a type of special attack unique to each character. In the PS4 version, players can only use the Elemental Burst of the active character, and are required to change characters first to use another character's Elemental Burst.

Although it's a minor difference, this slight delay has the potential to disadvantage PS4 players in the middle of an intense battle.

In order for us to make the best articles possible, share your corrections, opinions, and thoughts about 「Difference Between Mobile and Console Versions | Genshin Impact」 with us!