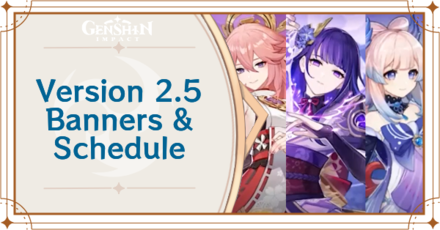 The Wish Banners in Genshin Impact 2.5 include the release of Yae Miko and reruns for the Raiden Shogun and Kokomi. Check out all banner dates for the 2.5 Update and see a list of featured characters in each banner here!

All 2.5 Banners and Schedules

The banner images above display character rate-ups from their previous runs. We'll update them once the new rate-ups are released!

Both the Raiden Shogun and Kokomi's banner reruns are now live! This Wish System is called ''Character Event Wish-2'' and allows two banners to run at the same time.
Banner Guides & History 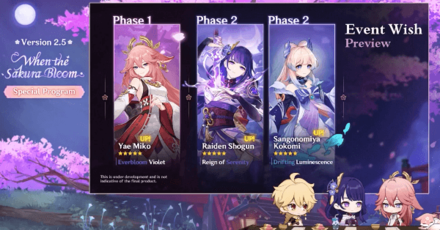 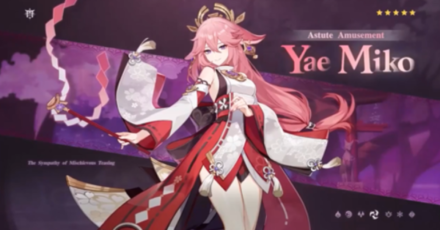 Yae Miko was released in the first half of Version 2.5! Along with a rate-up for Yae Miko, the banner also has rate-ups for Thoma, Diona, and Fischl.
Yae Miko's Character Guide

The Raiden Shogun and Kokomi have first reruns active in the 2nd half of Version 2.5. Their featured 4-Star characters are Bennett, Sara, and Xinyan. 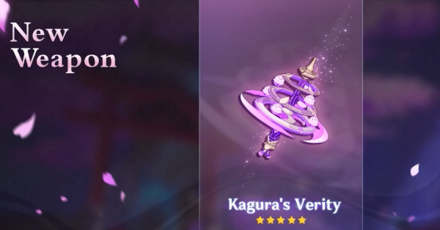 Kagura's Verity is rate-up in the Epitome Invocation banner for the first half of Version 2.5, matching Yae-Miko's banner release.
Kagura's Verity Weapon Guide

The 5-Star weapon rate-ups are Raiden Shogun and Kokomi's best weapons. Pull if you want to give your Raiden or Kokomi a boost!

The 2.5 Update for Genshin Impact will be released on February 16, 2022. Take a look at our full version guide for more news on upcoming 2.5 content:
Update 2.5 Release Date & Patch Notes

All News on Genshin Impact 2.5

Post (0 Comments)
Opinions about an article or post go here.
Opinions about an article or post
We at Game8 thank you for your support.
In order for us to make the best articles possible, share your corrections, opinions, and thoughts about "Genshin Impact 2.5 Banners and Release Dates" with us!
When reporting a problem, please be as specific as possible in providing details such as what conditions the problem occurred under and what kind of effects it had.