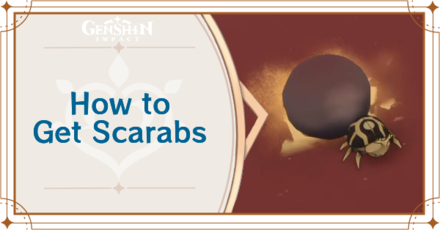 The Scarab is a Sumeru Local Specialty in Genshin Impact. See an interactive map of Scarab locations both aboveground and underground, best farming routes, and shops so you can ascend Cyno!

All Scarab Locations in Genshin

Where to Find Scarabs in Genshin

Scarabs are a Sumeru Local Specialty so they can only be found in the Sumeru Desert. Although most Scarabs are easily found aboveground, some of them are located underground and are locked behind the desert's clearance mechanic.

Make Use of Character Farming Passive

Tighnari's Passive, Encyclopedic Knowledge, displays the location of nearby resources unique to Sumeru on the mini-map. 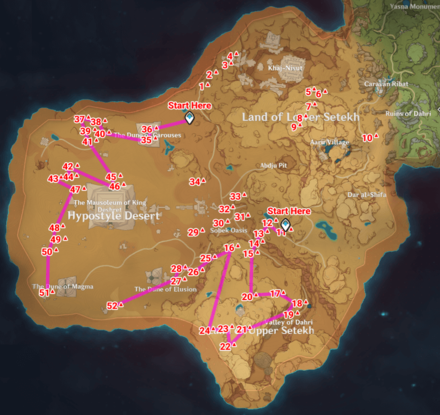 Teleport to the ruins of Khaj-Nisut in the northwest waypoint of Land of Lower Setekh. Follow the road going south to the second waypoint, then head west along the edges of Hypostyle Desert. Continue farming for Scarabs in the Upper Setekh.

Where to Find Scarabs Aboveground 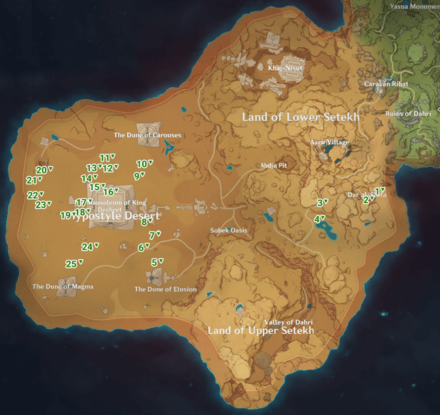 You will need to complete the Golden Slumber and Old Notes and New Friends quest chains to unlock the hidden waypoints and start farming underground.

Where to Find Scarabs Underground

When do Scarabs Respawn in Genshin?

Scarabs respawn 48 hours in real-time like other Local Specialties. You will need 6 days at max to fully collect enough scarabs to ascend a character to 90.

If you run out of Scarabs in your own world, you can visit other players' worlds while waiting for the Scarabs to respawn. Just be sure to ask before you gather them!

Where to Buy Scarabs in Genshin?

No Scarab Shops Yet

You cannot buy Scarabs in Genshin Impact as there are no Scarab vendors yet as of Version 3.1. We'll update this section if any Scarab shops are released in future versions.

How to Use Scarabs in Genshin

Use Scarabs to Ascend Characters

You need a total of 168 Scarabs to ascend characters to the max levels.

What are Scarabs in Genshin?

Scarabs are both a Local Specialty material and a catchable wildlife animal released in the Version 3.1 update on September 28, 2022!

In order for us to make the best articles possible, share your corrections, opinions, and thoughts about 「Scarab Locations and Farming Routes | Genshin Impact」 with us!