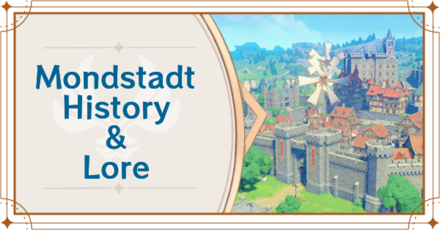 Monstadt is a location in Genshin Impact. Check here for Mondstadt history, lore, mysteries and characters and more!

The History of Mondstadt

Decarabian, The King of Gales 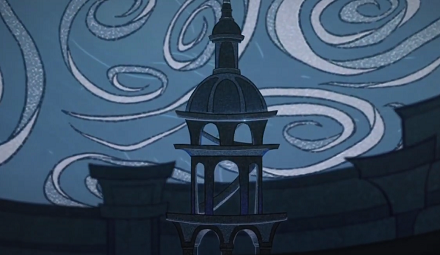 As described by Venti in his Story Quest, Mondstadt was once ruled by a tyrant leader that oppressed his people. This ruler was Decarabian, the previous Anemo Archon before Barbatos.

Mondstadt during this time was a cold and harsh land. To protect his people, Decarabian surrounded the old city of Mondstadt in a powerful vortex, keeping the encroaching cold from entering and his people from leaving. Judging by the sources on his rule, Decarabian seemed unaware that his people held him in contempt.

At one point The King of the North Wind, Lupus Boreas, declared war on Decrabian but was unsuccessful in even penetrating the defensive winds.

The Fall of Decarabian & the Rise of Barbatos 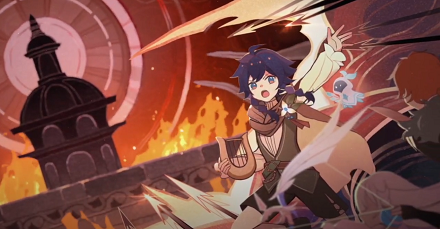 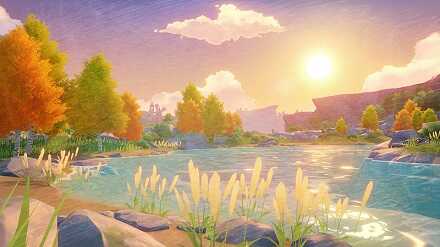 Using the power of the Four Winds, Barbatos blew away the snow and ice from the land and reformed the geography of Mondstadt completely. After that, he established a new city of Mondstadt where it still stands to this day.

Rather than rule as Decarabian did, Barbatos instead chose to fully embrace the ideal of freedom and left Mondstadt to be governed by the people. 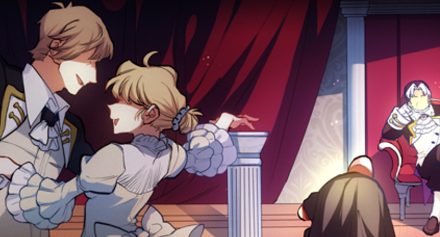 In the centuries following the departure of Barbatos, the nobility of Mondstadt spiraled into depravity. The Lawrence family in particular were especially corrupt. The traditions and histories of Mondstadt were obscured or rewritten in order to further cement the power of the nobility.

A band of bardic swordsmen attempted to overthrow the aristocracy but failed in their efforts. Their legacy can be found in the Wanderer's Troupe artifact set, as well as the 4-Star Wanderer's Troupe weapons: The Bell, The Stringless, The Flute, and The Widsith.

The Rise of Vennessa and Return of Barbatos

During the reign of the aristocracy, some slaves were offered a chance at freedom becoming gladiators for the amusement of the nobility. One of these gladiators was Vennessa, a red haired woman enslaved with the rest of her people called the Muratans. Once again hearing the prayers of the oppressed, Barbatos returned during the Lupi Harpastum festival and saw the corruption of his ideals first hand.

After meeting Vennessa and hearing her plight, Barbatos, now Venti, blessed her with the power to defeat and drive off Ursa the Drake, which the nobles were using as a means to control Mondstadt. After the defeat of Ursa, Vennessa staged a revolt with the assistance of nobles who remained uncorrupted and Mondstadt was liberated once more. Later on Vennessa would ascend to Celestia at the site of the great tree in Windrise.

Following the exile of the Lawrence family and the removal of the corrupt elements of Mondstadt, Vannessa established the Knights of Favonius as the governing force in Mondstadt, and was named the first Liontooth Knight, also known as the Dandelion Knight. 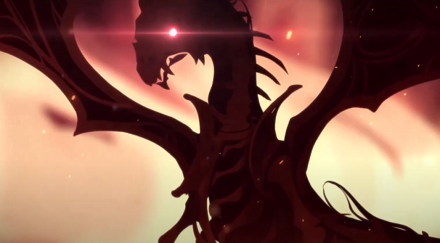 During the Cataclysm, The Knights of Favonius ventured forth on a crusade to drive away the monsters that spawned at the heart of Khaenri'ah. While away, the black dragon Durin, born of the corruption from Khaenria'h, attacked the defenseless Mondstadt.

Barbatos summoned Dvalin, a dragon he had befriended that was born of the winds, to fight off Durin. Durin and Dvalin battled over Mondstadt, and Durin was defeated and died on the Dragonpsine mountain. Though victorious, Dvalin was unknowingly corrupted by Durins blood and went into slumber following their battle. To this day, Durin's heart still beats deep within Dragonspine. 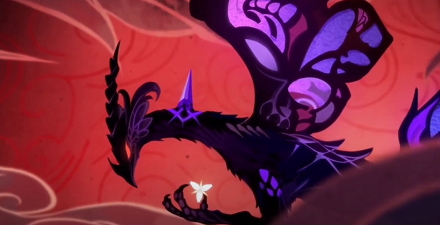 After challenging Dvalin in the ruins of Old Mondstadt, now called Stormterror's Lair, the Traveler and Venti emerge victorious and Dvalin is returned to the skies, free once again.

Almost immediatly following the restoration of Dvalin, La Singora, Eighth of the Fatui Harbingers, appears quickly and immobilizes Venti before stealing his foci of power, the Gnosis. It seems the Cryo Archon, the Tsarista of Snezhnaya and the leader of the Fatui, is planning to make use of the source of the Achon's power. We will have to wait and see what unfolds.

Sources on the History of Mondstadt

The Four Winds of Mondstadt 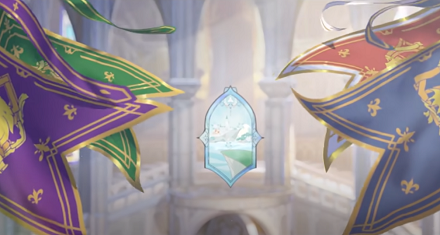 After Mondstadt was freed from the aristocracy, Venti established the Four Winds as the nation's guardians and symbols of protection as well as four shrines dedicated to them.
Venti Establishes the Four Winds

The Wolf of the North 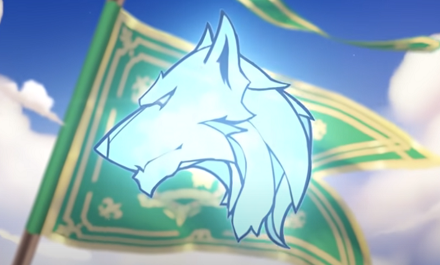 Long before Venti officially established the Four Winds, Andrius was already known as the King of the North Winds. Andrius protects the wolves and wilds of Mondstadt and is said to have a soft spot for abandoned human children. The Temple of the Wolf is located just south of the Thousand Wind Temple.

The Lion of the South 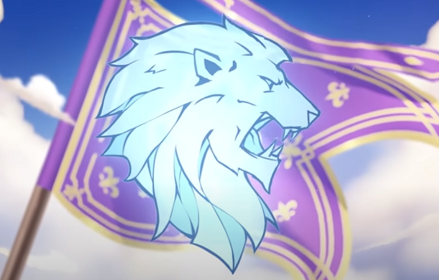 Venessa was the first Lion of the South and this title would be passed down to each Grand Master Knight following her. The title was passed to Jean after becoming a distinguished Knight at the age of fifteen. The Temple of the Lion is a top a large cliff overlooking Windrise.

The Falcon of the West 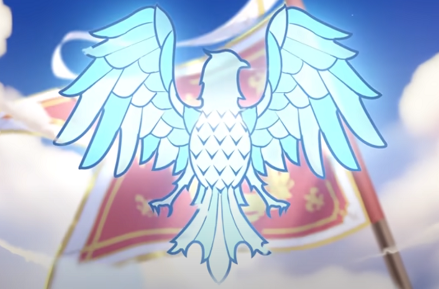 Venessa's spirit took the form of a falcon when she ascended to Celestia where she became another of Mondstadt's Four Winds. The Temple of the Falcon is the closest to the city of Mondstadt standing directly across from its bridge.

The Dragon of the East 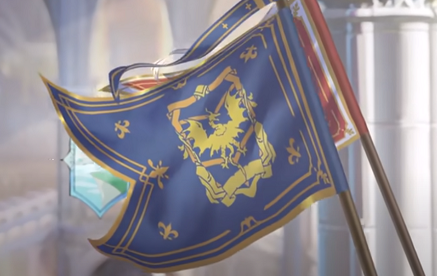 Dvalin is the Dragon of the East Wind though there doesn't seem to be a Temple of the Dragon in Mondstadt. During the Mondstadt chapter of the Archon Quest, the traveler works with the Knights of Favonius to break Dvalin's control over the other 3 Temples before being able to challenge him. It is unknown if the temple for Dvalin was lost to time or if one was even built.

The Clans of Mondstadt

The major clans of Mondstadt date back towards the reign of Decarabian and are pivotal in the turning points of Mondstadt's history. Once nomadic in nature, the clans would unite under Barbatos and eventually become the nobility of modern Mondstadt.

The Gunnhildr Clan chose to forsake the Lord of Storms and ventured out into the frozen landscape of wild Monstadt. As explained in the book The Biography of Gunnhildr, the daughter of the clan leader, Gunnhildr, prayed for protection against the frigid cold and was answered by a wind sprite. Through the faith of her clan and their cries for freedom the wind sprite grew in power and eventually became Barbados the Anemo Archon.

Never reliquishing their ideal to protect Mondstadt, the clan clings to its motto: For Mondstadt, as always. Thus they remained uncorrupted in the age of the aristocracy and helped in the liberation of the nation.

Jean and Barbara are the current prominent members of the Gunnhildr clan leading both the Knights of Favonius and The Church of Favonius respectively.

The Imunlaukr were the clan of warriors who believed in appealing to the gods via battle. The clan's name sake warrior, Imunlaukr, would eventually journey to the Dragonspine region and make contact with the kingodm that lived at its peak.

The adventurous Lawrence clan scoured the reformed Mondstadt and tamed its wilds. This clan would eventually begin to warp the traditions and histories of Mondstadt in their favor and bring about the corrupt age of the aristocracy, only to be later over thrown by Vennessa and exiled.

Sources on the Clans of Mondstadt

The Regions of Mondstadt 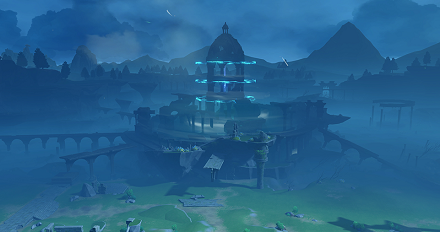 Dvalin's liar is actually the ruins of old Mondstadt. The King of Gales, Decabarian ruled Mondstadt from within the great tower at the center and even today the remnants of his great storm wall remain, blocking direct passage into the the tower. Later, Dvalin would slumber in these ruins after being poisoned in his fight with Durin.When Dvalin became corrupted by the Abyss Order he would return to rest in old Mondstadt after terrorizing its people, earning it the name Stormterror's Lair. 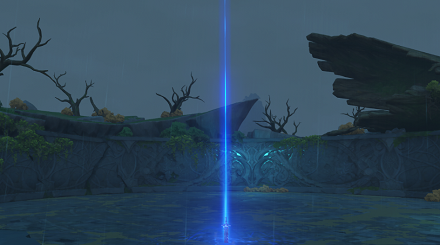 Wolvendom is the home of Mondstadt's elusive wolves and is protected by the spirit of the Wolf of the North Winds, Andrius (Lupus Boreas). It was here that the feral child Razor was raised by wolves before being found by Varka and taken to Mondstadt.

The sword in the arena where the Traveler and Razor battled Andrius is the original Wolf's Gravestone, though it appears chipped and damaged. The Wolf's gravestone was a sword used by the first Knight of Boreas and eventually became the grave marker for his wolf companion. The exact connection Andrius has with the sword and the original Knight of Boreas and his companion is still unclear, but the Boreas Knight title is one passed down through the Knights of Favonius and is currently held by Varka.

East of Mondstadt are the ruins of the Thousand Winds Temple. This temple appears to have served various purposes through out the history of Mondstadt. Despite the name, the temple was once a place the ancient people of Mondstadt worshiped both the Anemo Archon and a god of Time.

Through the ages its seems the god of Time was eventually forgotten by the people of Mondstadt and the temple was thought to be only for the Anemo Archon. What is left of the temple now is more reflective of its recent past as the gated entrances and circular seating make it clear that the Thousand Winds Temple was a the site of Mondstadt's colosseum where slaves battled during the reign of the aristocracy.

Sources on the Thousand Winds Temple

The great tree at Windrise grew from the spot where Venessa, the founder of the Knights of Favonius, is said to have ascended to Celestia. It seems that Windrise is a particular place of reverence for both Venti and Jean, as they are both connected to Vennessa.

Register as a member and get all the information you want. (It's free!)
Login
Opinions about an article or post go here.
Opinions about an article or post
We at Game8 thank you for your support.
In order for us to make the best articles possible, share your corrections, opinions, and thoughts about "Mondstadt History and Lore" with us!
When reporting a problem, please be as specific as possible in providing details such as what conditions the problem occurred under and what kind of effects it had.