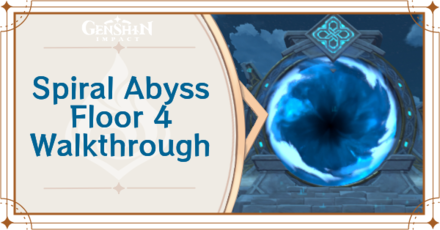 This is a guide for floor 4 of Spiral Abyss in Genshin Impact. Keep reading for recommended party members, enemy lists, and possible rewards!

The Ley Line bonuses in this floor allows you to make full use of your Electro characters.

Make sure your characters are above level 50 before heading in to be on the safe side. The higher your level the easier it'll be to get all 9 stars. 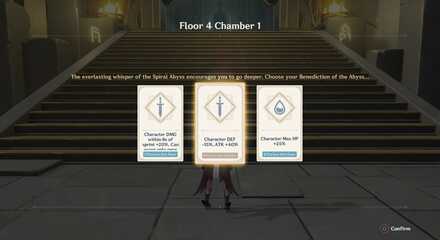 You'll be dealing with huge enemy mobs in this floor, which means that you have to clear them out as quicly as possible. Getting buffs that focus on ATK boosts and Elemental Mastery allows you to maximize the amount of damage you can do in each chamber.

Make Use of Elemental Reactions Early

Increased Electro damage means that you should maximize using Elemental Reactions like Superconduct and Overload. This willl help you deal high damage early, and handle enemy mobs much better.

Take Out the Hilichurl Shooters Quickly 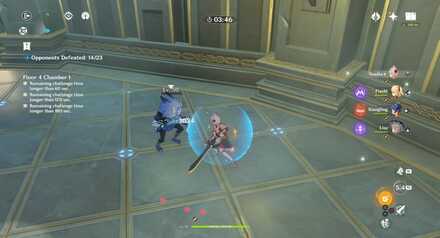 The presence of Hydro Slime on this chamber is something that the Cryo Hilichurl Shooter will take advantage of. A well-placed shot from them can cause you to freeze, leaving you vulnerable to getting damaged.

Avoidsthis by taking out the Shooters as soon as they spawn!

Use Your Cryo or Electro on Hydro Abyss Mages

Abyss Mages are some of the peskier enemies in the game, and the Hydro Abyss Mage is no exception. They can immobilize you with their bubbles and can freeze you in place if there are still Cryo Hilichurl Shooters nearby.

Save your Elemental Bursts on the Abyss Mages when their Shields are down, and you'll finish them off quicker.

The chamber starts with a mob of enemies spawning all around the Ley Line Monolith. It's important to keep them at bay by using Elemental skills and bursts to keep them as far away as possible.

Ranged enemies (Hydro Abyss Mage and Cryo Hilichurl Shooter) will automatically target the Ley Line Monolith as soon as they spawn. Take them out as quikly as you can and get back to attacking the rest of the mob.

Keep your Enemies Focused on Attacking you

Enemies will constantly go straight for the Ley Line Monolith, which means that it can take huge amountds of damage if your're not careful. Make your enemies focus on you, and you can prevent the monolith from getting destroyed!

Elemental Reactions are the key to finishing this chamber at the fastest time possible, which is why picking the Elemental Mastery buff is the best choice.

Take out the Samachurl and Cryo Shooter First!

The Hydro Samachurl and Cryo Hilichurl Shooter will constantly create Freeze reactions if you're not careful. Make sure you focus on them first before taking out the rest.

Use Cryo or Electro on the Hydro Abyss Mages

Two Hydro Abyss Mages are the last enemies in this chamber. Taking out their Hydro Shield is a must, which is why using Cryo or Electro attacks to destroy those quickly.

The Elemental Mastery chamber buff also comes in handy, as you can create a flurry of reactions that will cause massive damage.

Register as a member and get all the information you want. (It's free!)
Login
Opinions about an article or post go here.
Opinions about an article or post
We at Game8 thank you for your support.
In order for us to make the best articles possible, share your corrections, opinions, and thoughts about "Spiral Abyss Floor 4 Walkthrough" with us!
When reporting a problem, please be as specific as possible in providing details such as what conditions the problem occurred under and what kind of effects it had.