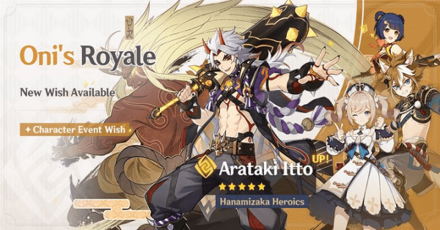 Oni's Royale is Arataki Itto's banner in Genshin Impact. Learn Oni's Royale's featured characters, character and weapon drop rates, banner dates and reruns, and whether or not Itto's Banner is worth pulling on!

Arataki Itto's banner is currently unavailable as it ended on January 4, 2022,

Is Arataki Itto's Banner Worth It?

Should You Pull on Arataki Itto's Banner?

Both of the new Version 2.3 characters, Itto and Gorou, were available in this banner. Because of Gorou's support abilities and the set bonus from Husk of Opulent Dreams artifacts, Geo team comps are now more powerful than ever!

In addition to the new characters, people had the chance to get more Xiangling and Barbara constellations from this banner! Although they're free-to-play characters, they benefit greatly from constellations and are great additions to any team comp! 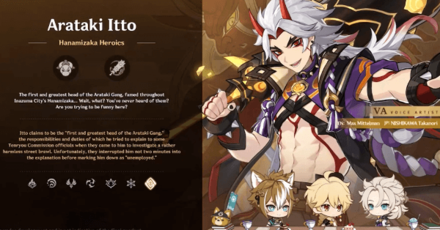 Arataki Itto was the new 5-star Claymore character that came to Genshin Impact. He is strong Geo Main DPS who can dish out fast and strong attacks! 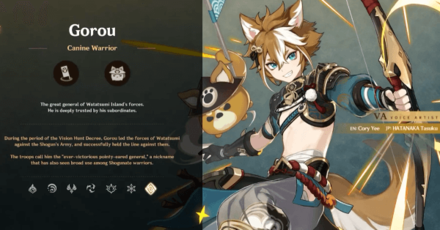 Along with Itto, Gorou was released as a new playable 4-star Geo character. Gorou can act as a Support who can buff your entire party's DEF.

The Oni's Royale Wish banner includes all standard 5-star and 4-star characters. You cannot get any 5-star event characters from Itto's banner other than Itto.

There is a 50% chance to pull the featured 5-star character on your first 5-star pull. If you get a different 5-star on the Oni's Royale banner, your next 5-star pull is guaranteed to be Arataki Itto.

Register as a member and get all the information you want. (It's free!)
Login
Opinions about an article or post go here.
Opinions about an article or post
We at Game8 thank you for your support.
In order for us to make the best articles possible, share your corrections, opinions, and thoughts about "Arataki Itto Banner Release Date and 4-Star Characters" with us!
When reporting a problem, please be as specific as possible in providing details such as what conditions the problem occurred under and what kind of effects it had.