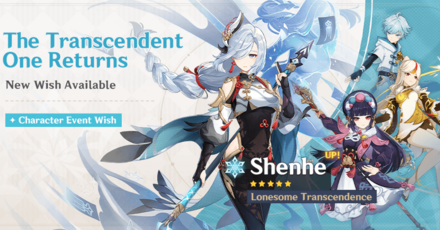 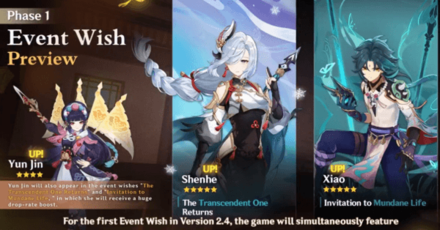 Both Shenhe and Xiao had their simulatenous run in the first half of Version 2.4. Xiao's rerun banner was on the Character Event Wish-2 event wish banner!

Shenhe's banner shares the Pity Count with Xiao's, so you can wish on either one and switch to the other without wasting any Primogems!

The Transcendent One Returns

Is Shenhe's Banner Worth It?

Should You Pull on Shenhe's Banner?

Both of the new Version 2.4 characters, Shenhe and Yun Jin, are available in this banner. Shenhe primarily works as a support for Cryo characters and Yun Jin can support your party by strengthening your Normal Attacks while also dealing Geo DMG!

The Transcendent One Returns Wish banner includes all standard 5-star and 4-star characters. You cannot get any 5-star event characters from Shenhe's banner other than Shenhe.

There is a 50% chance to pull the featured 5-star character on your first 5-star pull. If you get a different 5-star on the Invitation to Mundane Life banner during this dual banner event, you can come back to this banner and get a guaranteed copy of Shenhe!

Post (0 Comments)
Opinions about an article or post go here.
Opinions about an article or post
We at Game8 thank you for your support.
In order for us to make the best articles possible, share your corrections, opinions, and thoughts about "Shenhe Banner Release Date and 4-Star Characters" with us!
When reporting a problem, please be as specific as possible in providing details such as what conditions the problem occurred under and what kind of effects it had.