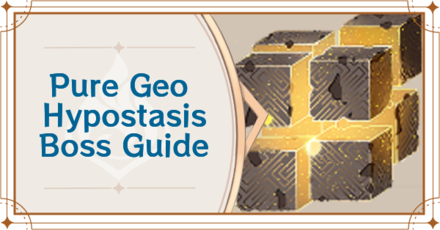 The Pure Geo Hypostasis is an event boss during Hypostatic Symphony Event in Genshin Impact. Find out its attack patterns and the strategy to beat it here!

Bring at least one Claymore User

The Geo Hypostasis will start the fight by putting up 4 pillars, preventing you from using close-ranged attacks. Make sure you have at least one claymore user in your party to destroy the pillars quickly.

This will leave the Hypostasis vulnerable to your attacks, and prevent it from using its other abilities. 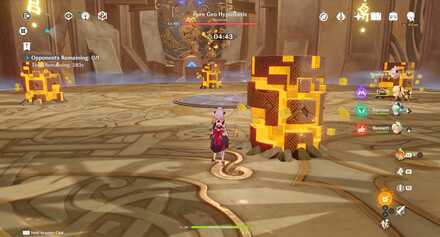 Similar to the regular Geo Hypostasis fight, it's important to break the pillars to leave it vulnerable to attack. Destroying the 4 pillars quickly will help make the fight much easier.

Focus on the Pillar with the Hypostasis 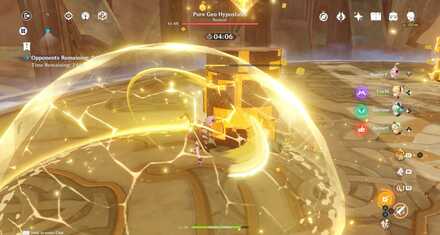 The Geo Hypostasis will move around across the 4 pillars, setting up different attack patterns. Focus on damaging the pillars where the Hypostasis, as it will be left vulnerable after the pillar has been destroyed.

Use the Pillars to Take Cover

The pillars during the fight will launch Geo projectiles, dealing high amounts of damage. You can avoid this by taking cover in one of the pillars, and using those projectiles to help deal more damage to the pillars themselves. 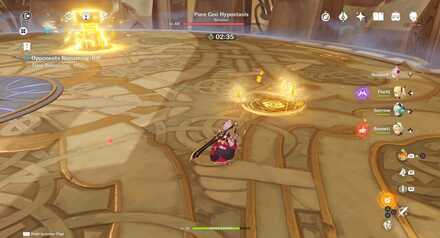 Break each pillar will cause it to drop a few shield crystals, which protects you can getting damaged during the fight.

After greatly reducing its HP, the Geo Hypostasis will create 3 Rock Pillars to revive itself. Destroy all pillars to win the fight!

Early in the fight, each Rock Pillar (except for the one with the Hypostasis) will shoot Geo projectiles at you. Make sure you dodge and use the free pillar to take cover.

The pillars where the Hypostasis is located will emit a strong shockwave attack. Make sure you have shields up to absorb damage while breaking the pillar.

This is a homing variation of the Shockwave attack. Once the ground flashes, get ready to dodge the attack. This will be done 3 consecutive times, which means timing is crucial to avoid getting hit.

This is one of the attacks the Hypostasis will perform when all Rock Pillars have been destroyed. Dodge the highlighted area, and attack the Hypostasis while it's vulnerable!

After destroying one pillar, it will leave a crystal that will deal high AoE damage. Run away from this as soon as you break the pillar.

A new attack unique to this fight, the crystals left behind after destroying the pillars will link up with the Hypostasis and deal massive AoE damage. Break these crystals to keep yourself safe.

Register as a member and get all the information you want. (It's free!)
Login
Opinions about an article or post go here.
Opinions about an article or post
We at Game8 thank you for your support.
In order for us to make the best articles possible, share your corrections, opinions, and thoughts about "How to Defeat Pure Geo Hypostasis | Hypostatic Symphony Challenge Guide" with us!
When reporting a problem, please be as specific as possible in providing details such as what conditions the problem occurred under and what kind of effects it had.