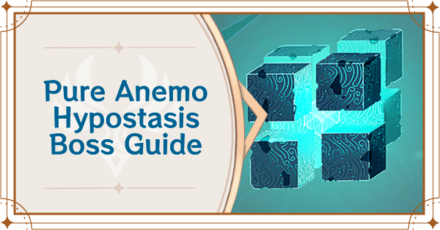 The Pure Anemo Hypostasis is an event boss during Hypostatic Symphony Event in Genshin Impact. Find out its attack patterns and the strategy to beat it here!

The Pure Anemo Hypostasis will absorb floating elemental orbs during its Vacuum Pulse AoE attack, but if the orb has been changed from Anemo to any other element the attack will be interrupted creating an opportunity to strike. 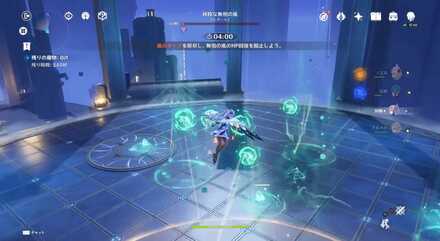 Just like the regular Anemo Hypostasis, once the Pure Anemo Hypostasis is at critical health several Anemo element orbs will appear. You will need to collect all 5 Anemo orbs otherwise it will recover HP and extend the fight.

During this phase there will always be one orb that will move clockwise around the field. You'll need to time your gliding just right to catch it.

Once all the orbs have been collected you can deal the last bit of damage to the Pure Anemo Hypostasis and end the fight!

During this phase tornadoes will spawn and move throughout the arena. You can avoid the tornadoes rather easily by moving to the edges of the area, or destroying one of the Anemo crystals to generate a air current and hover over the tornadoes. Also, imbuing the tornadoes with other elements can help interrupt the Vacuum Pulse attack.

After a moment of charging 3 Anemo blasts will be fired from the Pure Hypostasis Core. You'll need to dash at least 3 times to successfully dodge the blasts.

The Pure Anemo Hypostasis launches its defensive cubes into the air and beings to slowly rain down Anemo Bursts in telegraphed spaces. Since this attack leaves the core open to attack and the AoE bursts are fairly easy to dodge, you can consider this as another attack window.

When the Anemo core transforms into a butterfly it will execute a 2 hit combo attack. The first attack is a large AoE swoop that will launch the player before firing an Anemo cross slash. If you dodge through the AoE towards where the core transformed, the second attack will miss.

A more powerful version of the Hypostasis clap attack. This version will fire 3 Anemo slashes immediately after the clap. Quickly dodging left or right will avoid the clap and slashes.

The defensive cubes will be pushed out and the core will be exposed for a few moments before all of the cubes are sucked back in to the core for a crush attack. The crush attack is very powerful and can one shot some characters. We recommend using a ranged unit to damage the core safely from afar.

Similar to the normal Anemo Hypostasis, the core will absorb the floating elemental orbs and cause arena wide Anemo pulses that will knock down the player. The number of pulses can be reduced by creating a wind current from the Anemo crystals and picking up as many Anemo orbs as possible. It is also possible to dodge pulses by using currents as well.

We recommend interrupting this attack completely by changing the elemental orbs to during the Tornado Phase.

This is a new ultimate attack unique to the Pure Anemo Hypostasis. After the core transforms into a butterfly the entire arena will be engulfed in a hurricane dealing heavy damage over time. This attack can be interrupted by executing a Plunge Attack on the floating core. Creating a wind current from the Anemo crystals, or using characters like Keqing or Albedo is recommended in order to easily execute a Plunge Attack.

Register as a member and get all the information you want. (It's free!)
Login
Opinions about an article or post go here.
Opinions about an article or post
We at Game8 thank you for your support.
In order for us to make the best articles possible, share your corrections, opinions, and thoughts about "How to Defeat Pure Anemo Hypostasis | Hypostatic Symphony Challenge Guide" with us!
When reporting a problem, please be as specific as possible in providing details such as what conditions the problem occurred under and what kind of effects it had.