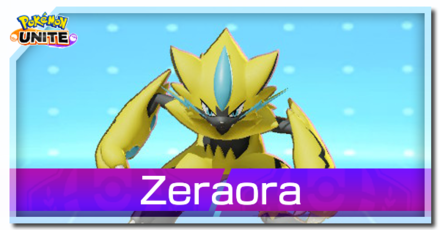 The best guide on how to play Zeraora in Pokemon UNITE for Nintendo Switch and Mobile. Check here for the best builds, Held and Battle items, movesets, as well as the latest nerfs, buffs, counters, matchups, how to get Zeraora, and more!

How to Get Zeraora License 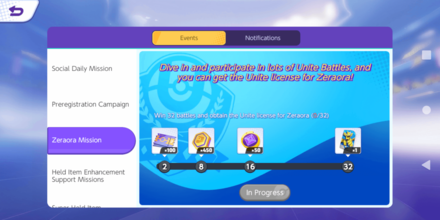 With the release of the mobile version, there is a new mission that will allow you to unlock Zeraora. This mission will require you to play and win 32 UNITE battles to get a free Zeraora License!

If you already have a Zeraora License from playing before the Mobile Release, you will instead be compensated with 8000 Aeos Coins! This is a sweet deal so try finishing this event whether you have Zeraora or not!

The Best Build for Zeraora is the one with the gold crown!

This is a single-target-focused build that offers a blend of offense-defense with the goal of picking off single targets. Your core gameplay is about targeting easy matchups or isolated enemies using Spark to initiate, then following it up with a Wild Charge to defeat them quickly - or, at least, chip off a large portion of their HP. Remember, Spark can be activated at least three times. Moreover, successfully hitting the target at least once with a Spark attack or a Boosted Attack will increase the number of Wild Charge' hits, so make sure to aim properly to get the most amount of damage!

Equipping a Muscle Band increases Zeraora's Attack and Attack speed for a more consstent damage output. Focus Band gives extra sturdiness while you maneuver around the target to set up a full Wild Charge. Lastly, a Buddy Barrier provides a big HP boost, and a surivivability tool when using Plasma Gale.

X Attack further amplifies your damage output, allowing you to take out targets faster. Alternatively, if you want more survivability, equip a Potion instead, which enables you to quickly heal as you go around slashing opponents. It also works well with Buddy Barrier since the healing depends on your max HP.

All In Damage Build

This build is centered around maximizing Zeraora's damage output when you initiate fights with Spark and Discharge, sacrificing defense completely for a straight, all damage build.

Muscle Band will be essential in raising Zeraora's Attack damage and attack speed. Weakness Policy provides decent HP and damage, and works well with Volt Absorb as you take hits and squeeze out more damage. Finally, Razor Claw lets opponents stick to Zeraora more thanks to the movement speed reduction.

X Attack is the cherry-on-top to this build, amplifying your damage output further. Make sure to activate it before you engage with your target.

This build takes advantage of Zeraora's Dash moves to score goals and stacking up goal-related items to the limit. Gameplay revolves around quickly scoring quick points and moving in and out of goal zones using Volt Switch for a quick dive and escape. Discharge's Area of Effect damage will be helpful for clearing out Wild Pokemon camps to accumulate points while potentially dealing a large amount of damage as you stack up.

Attack Weight and Score Shield are the bread and butter when it comes to goal stacking, incentivizing, and helping in scoring goals. Since you will be pushing for goals often, Buddy Barrier will give Zeraora more health to withstand sudden bursts of damage. Moreover, in bad situations, it can act as a last-resort escape plan when you activate Plasma Gale, granting you a shield to get away from pursuing enemies.

Eject Button is the default battle item for the build, giving you an option to get to goals faster or escape. However, if you want to ensure more successful goals, especially in the last minutes of the game, equip Goal-Getter instead.

Zeraora's move set is all about swooping down on the enemy and depleting their HP in quick succession. Spark is a versatile Dash move that allows Zeraora to get around its opponents while getting easy hits. If you prefer a dash move with more flexibility, learn Volt Switch instead. Combining both Spark and Wild Charge gives Zeraora more AoE damage as it jumps around from target to target.

Which Moveset Do You Think Is Best For Zeraora?

How to Play Zeraora 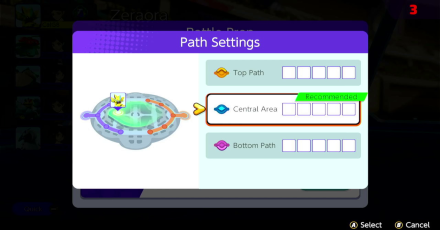 Taking the Jungler role is highly recommended. It allows Zeraora to freely farm Wild Pokemon so it can quickly get to its strong moves as fast as possible. Thanks to its powerful dash moves, it also opens up strong gank opportunities as the game progresses.

Focus on Farming Until Level 6 and 8 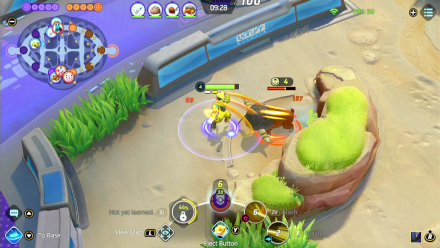 Zeraora's power spikes are massive from level 6 and 8. Make sure to stick to a farming route and avoid directly fighting opponents - unless they over extend. Doing this will give you access to Zeraora's powerful moveset like Spark and Discharge, which will be extremely powerful as you transition to the mid game. Try to aim for these power spikes before fighting for objectives and joining teamfights. 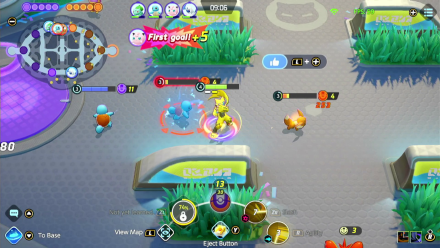 Slash is a strong single target burst and you are likely stronger than laners due to your solo EXP in the Jungle. Jump in with Agility and quickly follow it up with Slash for a quick burst and possibly a kill.

Choose Moves According to Enemy Composition

Zeraora has two playstyles that can change your approach to teamfights. Evaluate the enemy composition first at the start of the game to know the best skill path to take.

When to Play as an Assassin 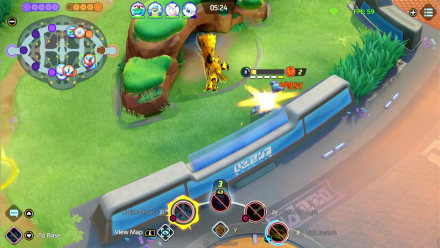 The Assassin playstyle excels at dealing heavy damage to a single target before weaving out of the fight. The moves it uses are Spark and Wild Charge. This combination of moves is best used against enemy team comps with low HP Pokemon and is especially good for targeting attackers like Cinderace and Pikachu.

When to Play as an AoE Damage Dealer 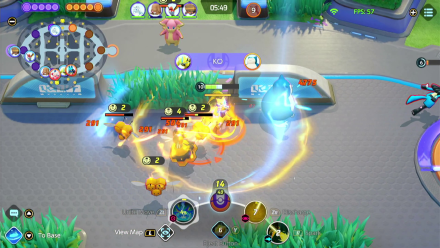 Going for the AOE move Discharge is perfect if the enemy team doesn't have a nasty attacker or DPS that will instantly burst you down after entering the fight. It is also great against a team with several disables as your Discharge still works even when Zeraora is stunned!

Lead the Fight Against Objectives 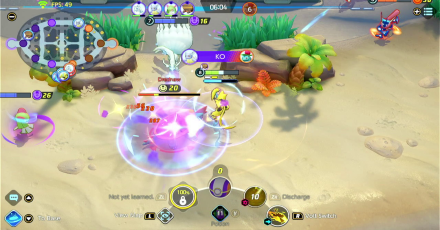 Another good thing to look out for are Boss Pokemon. As a jungle player, you should have access to Fluffy Tail which makes taking objectives like Rotom and Drednaw much easier. Overall, it is best that you intitiate the fight to capture objectives as much as possible to convince you team to follow suit.

Zeraora's Dash Moves are not just traversal skills, it can also be used for offensive plays. Volt Switch deals damage when enemies are caught in the path, so using it in melee range can be helpful in a pinch if you are in need of extra damage and attack speed. On the other hand, Spark can hone in on targets if a standard attack is used while in the air. Use this to get in melee and auto attack range with your targets! 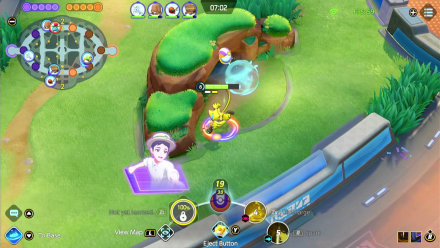 Being a Jungler with high mobility, you can invade the enemy central area to get free kills and even steal their camp to deny them EXP! This is especially true when you learn Spark as you are extremely hard to catch, which can make enemy speedsters like Gengar have a hard time catching up to you!

Do Not Hesitate to Use Zeraora's Unite Move 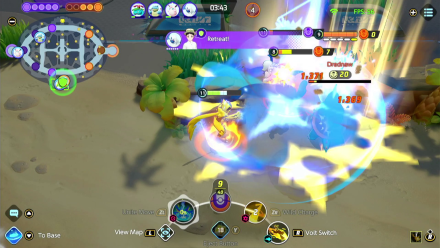 Not hesitating does not mean using it on Wild Pokemon.

Since you will be able to farm wild Pokemon and score goals easily, Zeraora's Unite Move will always be charged up and ready to use. So, it is best to use it as much as possible, even in just one-on-one fights!

Zeraora relies on his abilites and mobility to dish out tons of damage. Below are the bread and butter combos Zeraora can use for early game and his burst builds as well as his teamfighting build.

Zeraora is at its best when you get to attack every chance you get. It will be trouble when your opponents manage to stop your momentum. It also does not help if the target has high Endurance, which take a lot of precious time away from Zeraora.

Even Matchups for Zeraora

Even matchups are always a matter of skill, luck and timing. Here are some tips to help push Zeraora ahead against other Pokemon on equal footing.

Get Powerful Before Facing Head On

Catch them Off-Guard with Dash Moves

You will want to target low HP Pokemon for easy knock downs. Make sure you keep the pressure on when you engage and avoid retreating from the fight so they wont get a chance to counter.

Too Slow for Zeraora

See more comments (26 Comments)
Opinions about an article or post go here.
Opinions about an article or post
We at Game8 thank you for your support.
In order for us to make the best articles possible, share your corrections, opinions, and thoughts about "Zeraora Guide: Builds and Best Items" with us!
When reporting a problem, please be as specific as possible in providing details such as what conditions the problem occurred under and what kind of effects it had.