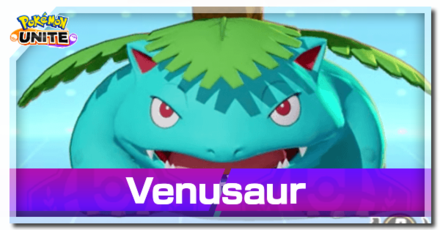 The best guide on how to play Venusaur in Pokemon UNITE for Nintendo Switch and Mobile. Check here for the best builds, Held and Battle items, movesets, as well as the latest nerfs, buffs, counters, matchups, and more!

The Best Build for Venusaur is the one with the gold crown!

This build focuses on reducing Petal Dance's cooldown to the point where you can keep activating the move all the time. This allows you to keep the uptime of the movement speed increase and the AoE damage to virtually forever. All of this while getting the cooldown reduction effect on Giga Drain. You need to play safe as possible in the early game since you won't have any defensive item equipped.

Shell Bell and Energy Amplifier are your core items for the build, giving you a total of 9% cooldown reduction on your moves. Wise Glasses gives you more damage and increases Giga-Drain's healing. However, if you want more durability, replace Wise Glasses with Buddy Barrier.

Eject Button is the default battle item for the build, giving you a mobility tool to work with. If you find yourself getting disabled by enemy crowd control, you can run Full Heal instead to get around stuns and slows.

Your Boost Emblem loadout should consist of 7 Black Emblems for maximum move cooldown reduction, 2 Green Emblems for a bit of damage, and 1 Emblem of any color. Equip Emblems that improve HP since the build lacks durability. You can freely trade Attack, Critical-Hit Rate, and Movement Speed.

A good strategy is to capture Accelgor to get more cooldown reduction! On top of the items and emblems in this build, getting the effect will reduce Petal Dance's cooldown down to 5 seconds. And, Since the move's effect also lasts for 5 seconds, you can essentially keep the move active until Accelgor's effect wears off!

This build is focused on dealing high damage from afar using Solar Beam. Sludge Bomb lets you deny areas from the enemy team with its damage over time and Slow effect on anyone inside its radius, making it easier to target Solar Beam. Try to use Solar Beam from angles that would hit multiple opponents as much as possible.

Wise Glasses, Choice Specs, and Sp. Atk. Specs all contribute to maximize Solar Beam's damage output. However, you can swap out Sp. Atk. Specs for Shell Bell if you wish to play more safely and avoid scoring small quick goals for the bonus Sp. Atk. stat. Since you do not have any defensive items, it is best to use this build if you are in a team with Defenders or All-Rounders that can protect you.

Eject Button is your only means of escaping or repositioning when you need a better angle to use Solar Beam.

Your Boost Emblem loadout should consist of 6 Green Emblems to maximize your moves' damage and 4 Emblems of any color. Equip Emblems that improve Sp. Atk since the build goes all-in on damage. You can freely trade Attack, Critical-Hit Rate, and Movement Speed.

This is an AoE, damage-sustain build that focuses on turning Venusaur into a tank that can sustain itself with HP recovery from Giga Drain. Use this build if you are looking to play passively with Petal Dance while making it hard for opponents to knock Venusaur down.

Focus Band and Buddy Barrier provide that much-needed health boost when you're in a middle of a clash. Assault Vest provides Venusaur with survivability, especially against Sp. Attackers that can burst it down.

Eject Button is a must-have battle item for this build, providing both offensive and defensive options. Alternatively, you can run Potion and take advantage of the high amount of HP you get from your items.

Your Boost Emblem loadout should consist of 6 Green Emblems for extra damage and 4 White Emblems to get more HP. Equip Emblems that improve Sp. Def, Defense, or HP since you want to be as durable as possible. You can freely trade Attack, Critical-Hit Rate, and Movement Speed.

The synergy between Petal Dance and Giga Drain allows Venusaur to tank hits while dealing constant damage in an area. The burst of movement speed you get from Petal Dance plus the ability to sustain HP throughout a fight makes it hard for enemies to escape. Also, Giga Drain's cooldown is reduced by 1s every time Petal Dance hits an enemy Pokemon, enabling you to keep spamming it to recover HP.

Choosing a moveset for Venusaur depends on which playstyle you prefer. If you prefer a burst-type damage dealer, always go for Solar Beam and Sludge Bomb. If you prefer a late-game carry playstyle, stick with Petal Dance and Giga Drain.

Which Moveset Do You Think is Best for Venusaur?

How to Play Venusaur

Venusaur's power spike starts at level 7 when it has both of its primary moves. It's best to play safe in the early game and focus first on leveling up.

You can always go to the jungle at the start of the game for the most efficient and safest way to level up. However, it all depends on which moveset you're taking. If you're taking Giga Drain and Petal Dance, going to the jungle helps you get to level 7 quickly. But if you're taking Sludge Bomb and Solar Beam, it's better if you head to one of the lanes.

Razor Leaf is a great offensive tool in the early game. Use it as often as you can to farm wild Pokemon or knock out opponents.

Switch Up Playstyle Based on Chosen Moves

Always switch up your playstyle based on the moveset you're taking. Although both move combinations offer damage, they require two distinct playstyles to work properly.

If you're using Solar Beam and Sludge Bomb, you need to stay at the backlines and utilize Solar Beam's long range to provide firepower for your team. You always need to mind your position before using your moves, especially during a teamfight.

Be Aggressive with Giga Drain and Petal Dance

With Giga Drain and Petal Dance, you need to be in the frontlines to make the most out of the moveset. The key to this moveset is reducing Giga Drain's cooldown by hitting as many opponents as you can with Petal Dance, allowing you to continuously recovery HP while fighting.

Venusaur's passive ability, Overgrow, increases its damage when the Pokemon is at low HP. This is useful for 1v1 fights since it gives you an edge as your HP drops. However, you shouldn't always try to fight at low HP just for the damage. It's important to know when to fight and when to retreat.

Moreover, Overgrow works best if you're running Giga Drain and Petal Dance since you can sustain HP while fighting.

Verdant Anger is a great initiation tool due to its damage. Use it to deplete your enemies' HP before the fight starts, giving your team an advantage for the fight.

Venusaur only has two playstyles, deal high-burst damage from afar with Solar Beam or diving into fights with Petal Dance and Giga Drain. Pokemon with high durability and high burst damage are the best counters against Venusaur.

Even Matchups for Venusaur

Winning against these Pokemon depends on which moveset you choose. If you're using Solar Beam, you need to play defensively and stay at the backlines. But if you're using Petal Dance and Giga Drain, you need to position yourself in the middle of the fight to maximize the combo's damage and effect.

Get Strategic Based on Your Moveset

Shred through their HP

Venusaur can easily take down these Pokemon regardless of its moveset choice.

Get Strategic based on Your Moveset

In order for us to make the best articles possible, share your corrections, opinions, and thoughts about 「Venusaur Guide: Builds and Best Items | Pokemon UNITE」 with us!