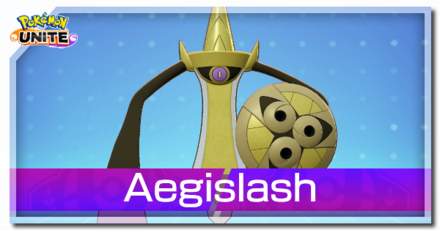 The best guide on how to play Aegislash in Pokemon UNITE for Nintendo Switch and Mobile. Check here for the best builds, Held and Battle items, movesets, as well as the latest nerfs, buffs, counters, matchups, and more!

The Best Build for Aegislash is the one with the gold crown!

This is a balanced build centered on dealing and tanking damage using Sacred Sword and Wide Guard. It aims to offer everything you need to make Aegislash a well-rounded Pokemon on the battlefield, regardless of team composition.

For offense, Razor Claw increases Aegislash's lethality when it chains its moves together with its Boosted Attacks. It also adds a slow effect to your targets, making it easier for you to unleash your attacks. For defense, Focus Band boosts Aegislash's defensive stats and makes the Pokemon more durable. Moreover, it also provides a healing effect when Aegislash's HP falls dangerously low, allowing the Pokemon to survive intense battles. Finally, for utility, Weakness Policy adds both HP and Attack for Aegislash. It also converts damage taken into more Attacks that the Pokemon can use to get ahead in a brawl.

Full Heal provides extra protection from hard crowd control. Make sure to activate the item before engaging in a fight, especially against Defenders or other All-Rounders that can pin you down. However, should you want more damage, equip X Attack instead. Potion is also a good pick, providing a low-cooldown sustain.

Your Boost Emblem loadout should consist of 6 Brown Emblems for maximum damage, and 4 White Emblems for additional HP. Equip Emblems that improve Attack, Critical-Hit Rate, or HP since you'd want to balance offense and defense for the build. You can freely trade Sp. Atk. and Movement speed.

This is a build centered on increasing Aegislash's critical-hit rate through items and Shadow Claw. Since this is an all-in, damage build, expect to play cautiously and only engage in a fight whenever there is an opening. It is best to seek out opponents isolated from their group for easy knockdowns. To get the most out of this build, it is recommended to take the jungler role to get the EXP advantage for ganking lanes. Wide Guard is your survivability move that also increases your boosted attack count when you get hit, always use it before Shadow Claw to get extra boosted activations!

Muscle Band, Scope Lens, and Razor Claw provide all the firepower you need to decimate single targets with critical hits. X Attack adds more damage and increases Aegislash's attack speed for a short time. Alternatively, you can use Slow Smoke instead if you want to pin targets in place for more pressure.

Your Boost Emblem loadout should consist of 6 Brown Emblems for maximum damage, and 4 White Emblems for additional HP. Equip Emblems that improve Attack andCritical-Hit Rate. If you can, try to get a bit of HP too. You can freely trade Sp. Atk.

This build runs score-related Held Items that significantly increase Aegislash's stats every time it scores a goal (up to 6 times). It is best used in a coordinated team for easier, early-game scoring. Since Aegislash does not have a full dash move, you will have to rely on the effects of both Sacred Sword and Iron Head to maneuver around opponents. However, it is still best to only score when there is an opening or when opponents have yet to respawn to avoid falling in battle.

Attack Weight and Score Shield give a significant amount of Attack and HP, respectively, each time you score a goal. Score Shield, on the other hand, gives you protection from getting interrupted from scoring and gives extra durability via increased HP.

X Speed is a great item for the build, allowing you to get aggressive, defensive, or escape from opponents when scoring points. However, if you want a more direct way of repositioning Aegislash, you can run Eject Button instead.

It's best to stick to Wide Guard as your Shield Forme move rather than Iron Head. However, you can alternate between Sacred Sword and Shadow Claw depending on your playstyle. Pick Sacred Sword if you want a better teamfight tool. If you're going for an assassin gameplay, opt for Shadow Claw instead.

Which Moveset Do You Think is Best for Aegislash?

How to Play Aegislash

Aegislash's power spike starts at level 7 where it has both of its primary moves. Focus on leveling up as fast as possible while avoiding fights in the early game. Once you reach level 7, you can start to get aggressive.

Putting Aegislash in the jungle is the safest and most efficient way to level up. It's highly recommended to take the Jungler role since Aegislash benefits greatly from the solo farm it gets.

One significant skill you have to learn to utilize Aegislash is knowing when to switch stances. Each stance boosts specific stats and changes the effects of your Boosted Attacks, allowing you to utilize them and adapt to the scenario at hand.

Switch to Blade Forme when Initiating

Always switch to Blade Forme when initiating fights or to put some pressure on your opponents. The increased movement speed, Attack, attack speed, and the HP-based damage from your Boosted Attacks help you shred enemies quickly. However, be careful of Pokemon with disables since they can punish your aggression with just a single stun.

Switch to Shield Forme while Blade Moves are on Cooldown

Switch to Shield Forme to survive fights or to hasten the cooldown of Sacred Sword or Shadow Claw. The increased defenses, and HP recovery and cooldown reduction effects from your Boosted Attacks should buy you enough time to reengage enemies.

Since Boosted Attacks play a central role in Aegislash's gameplay, constantly generating them is essential. Remember that the effects of your Boosted Attacks change based on your Stance (Blade Forme or Shield Forme). Moreover, it's important to note that Aegislash doesn't gain Boosted Attacks simply by attacking but instead requires using moves.

Use Sacred Sword or Shadow Claw

Use Wide Guard for Efficiency

Although Iron Head can also generate Boosted Attacks, Wide Guard has been proven to be more efficient. Activate Wide Guard when you're close to enemies since it has a short range and only hits enemies in front of you. Also, you can bait out enemy moves and attacks, then use Wide Guard to gain Boosted Attacks as you take damage.

Knocking out opponents with Coup De Grace also generates Boosted Attacks for each target, allowing you to keep the offense going as you defeat enemies.

Since Coup De Grace deals more damage the lower the target's HP is, it's best to use it to deal the killing blow instead of starting fights with it. Doing so makes the opponents be extremely careful when fighting you since they'll know you can easily defeat them when their HP gets low enough.

Coup De Grace is a great tool to secure boss Pokemon like Regieleki or Rayquaza since it deals more damage the lower the target's HP is. However, it requires proper timing to deal the final blow, otherwise, it just deals damage.

Aegislash's strength depends on its boosted attack activations. Countering Aegislash involves using Pokemon that are strong enough to withstand its initial flurry of slashes or knocking it down before it can fill up its boosted meter. Additionally, Aegislash has a relatively slow early game. If you can disrupt its EXP intake, Aegislash won't be able to reach Stance Change passive in the mid-game, which is what makes it powerful.

Even Matchups for Aegislash

Manage your boosted meter well and only shift to Sword Forme when fighting these Pokemon. It is best to start with a Shield Forme first to block their initial attacks and generate Boosted Attacks.

Use Their HP Against Them

Do not Fight for too Long

For easy matchups, target Pokemon that can be easily bursted down with multiple Boosted Attacks. Take advantage of Aegislash's high defenses while in Shield Forme to mitigate most of the damage for easy counter attacks.

Get Close and Perform Combos

Cut Off the Supporters

Take Your Beats and Fight Back

See more comments (35 Comments)
Opinions about an article or post

In order for us to make the best articles possible, share your corrections, opinions, and thoughts about 「Aegislash Guide: Builds and Best Items | Pokemon UNITE」 with us!