Energy Amplifier Effect and How to Get | Pokemon UNITE 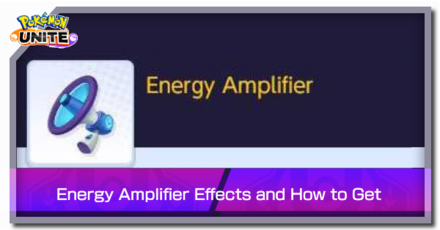 Energy Amplifier is a buff item that increases your Pokemon's damage for 4 seconds after using your Unite Move. The bonus damage affects both your Pokemon's moves and Standard Attacks when it is in effect.

How to Get Energy Amplifier

Energy Amplifier's effects activate whenever you cast your Unite Move, so Pokemon that are capable of using their Unite Moves repeatedly and in quick successions such as Machamp and Charizard are great users of this item. Cramorant is also particularly good with this item as it turns the first 4 seconds of its Gatling Gulp Missile into an HP shredding machine.

All Builds for Energy Amplifier

The purpose of this test was to determine how long the effect lasts from the moment the unite move is used until the effect is gone. After activating Pikachu's Unite move, we then proceeded to attack the doll with Standard Attacks and noted the damage increase until the effect disappears.

It is confirmed that the duration of the effect is about 4 seconds after the Unite Move is activated. Be sure to quickly follow up with Standard Attacks so you can deal extra damage!

The purpose of this test was to compare the unite move recharge time with and without Energy Amplifier (Level 30) equipped. Here, we took note of the cooldown of Pikachu's Unite Move at the start of the match.

After testing, it is confirmed that the recharge time was about 3 to 4 seconds faster with the item equipped than without it. The slight difference looks to be negligible, considering the charge gets filled up each time you defeat an opponent, score goals, or farm Wild Pokemon. It may not be worth running the item solely for this effect, especially if the item is at low levels.

Shell Bell Effect and How to Get

In order for us to make the best articles possible, share your corrections, opinions, and thoughts about 「Energy Amplifier Effect and How to Get | Pokemon UNITE」 with us!