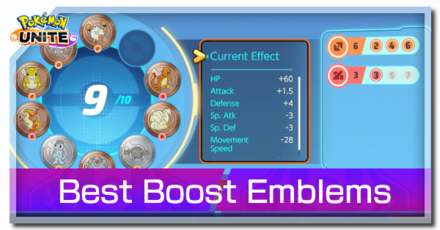 Boost Emblems give extra stats for your Pokemon to use during matches. Read on to learn the best Boost Emblems use for each stat and which ones to look out for!

The Machamp emblem gives you a straight increase in Attack while also having a Brown color to increase the Attack bonus count. Since you will most likely use this emblem on a Pokemon with an Attack Stat, the Sp. Atk. penalty is irrelevant, which essentially makes it a free stat. This emblem is an essential addition to any Attack-based loadout.

The Fearow emblem gives extra Attack with Sp. Attack as its free stat. What makes this emblem helpful is its White emblem color, which contributes to an increase in HP when paired with more of its kind. If you are looking to get extra durability for your Attack Pokemon, the Fearow emblem will be a good addition. Alternatively, you can get the Tauros boost emblem, which has similar stats to the Fearow emblem.

So far, the Kabutops emblem is the best emblem that offers critical-hit without too much downside. Since Sp. Atk. moves cannot deal critical hits, the penalty to Sp. Attack stat can be negated entirely when you equip the emblem to Pokemon with an Attack stat. Because of this, hard-hitters like Absol and Cinderace will greatly benefit from this emblem. Aside from the Brown color, it also has an extra Blue color that can potentially add more defense to your loadout!

The Nidoqueen emblem is a great offense and defense emblem for Pokemon that are situated on the front lines. Having both Purple and Brown colors makes the emblem best suited for Attack Stat All-Rounders like like Lucario or Tsareena who are susceptible to being overwhelmed by Sp. Attacks.

The Gyarados emblem offers the best combination of stats and colors for an Attack Pokemon to have. It has both Blue and White colors that contribute to a more durable Pokemon when you get the color bonuses. It also trades off with Sp. Attack, which is a free stat for Attack Pokemon.

Aside from the good combination of colors, the Aerodactyl emblem provides utility in the form of extra movement speed to make traversing the map more efficient. Be sure to use this emblem in loadouts for high-intensity Attackers like Cinderace or Greninja!

The Venusaur emblem is a straight trade-off between Sp. Atk. and Attack. However, since you be equipping this emblem to an Sp. Atk. Pokemon, the penalty will not have a significant impact on you Pokemon. Moreover, having a Green color makes it an essential choice for increasing your Pokemon's Sp. Atk without any drastic penalties.

The Blastoise emblem is also a great choice for increasing your Pokemon's Sp. Atk., albeit building around the Blue color. Because Sp. Atk. moves do not deal critical hits, the emblem's penalty will not be a big deal.

Although the Venomoth stats are average, what you are really going for is the combination of Green and Black colors that are that add to the bonus count. This is a great addition to an Sp. Atk. loadout where you are aiming to complete getting both Green and Black bonuses.

The Butterfree emblem is a great pick for loadouts that focuses on increasing your Pokemon's survivability. It will mostly help Sp. Atk. healers, which can benefit from stronger healing effects and increased survivability. Moreover, the emblem's stats fit well with any defensive, Sp. Atk. playstyles.

Having both a Green color and a stat that increases Sp. Atk. makes the Exeggutor emblem a good addition for Special Attack loadouts. Additionally, it includes a Purple color that can help increase Sp. Defense, which Attackers with a Special stat lack. Since you get a movement speed penalty, this emblem is best in loadouts for Sp. Attackers with high-damaging moves like Venusaur or Glaceon, which are mostly situated at the back of the line as they attack.

The Articuno Boost Emblem is a great addition for Sp. Atk. loadouts that incorporate durability in its set. Aside from the extra Sp. Atk. stat you get from the emblem, the White and Blue emblem combination provides survivability your Pokemon needs to sustain more damage before falling down in battle.

The Slowbro emblem has the best combination of defensive colors while also providing decent stat bonuses. It is a great addition for tanky, front-line Pokemon like Snorlax or Crustle that have ways to work around the movement speed penalty with their moves.

The Tentacruel emblem is a great Blue emblem that increases your Sp. Defense. It is best used in loadouts that focus on survivability while also taking advantage of the Black color bonus.

The Starmie emblem has both Blue and Purple colors, which covers both Physical and Special defenses. It is best used in loadouts with a tank playstyle that focuses on soaking up the damage for the team. The extra movement speed stat will also be helpful in getting into position and maneuvering around the battlefield.

In order for us to make the best articles possible, share your corrections, opinions, and thoughts about 「Best Boost Emblems | Pokemon UNITE」 with us!