★ Check out the updated Pokemon Tier List! HOT
★ Look for friends by going to our Friend Request Board! 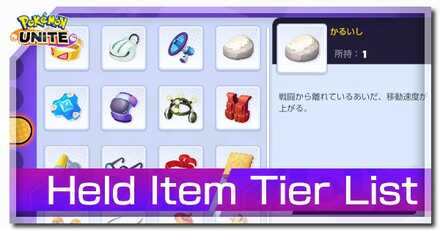 We are getting a ton of changes after the mobile release which includes three new Held Items! Stay tuned as we test out the new Held Items and see which will be the most effective items to use after the massive shakeup in Version 1.2.1.3!

Best Held Items for Each Role

Best Held Items for Each Pokemon

Each of these factors determine the Held Item's place within the tier list. Read on to learn what they refer to exactly:

Register as a member and get all the information you want. (It's free!)
Login
Opinions about an article or post go here.
Opinions about an article or post
We at Game8 thank you for your support.
In order for us to make the best articles possible, share your corrections, opinions, and thoughts about "Held Item Tier List: Best Items to Upgrade (September 23 Update)" with us!
When reporting a problem, please be as specific as possible in providing details such as what conditions the problem occurred under and what kind of effects it had.