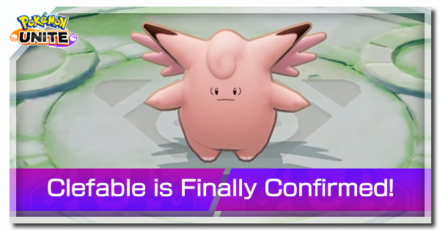 Clefable is has joined the Pokemon UNITE roster on October 13, 2022 for the Nintendo Switch, Android, and iOS. Read on to learn Clefable's release details, stats, and moveset!

Clefable was officially revealed on September 10, 2022.

During Clefable's character spotlight, Clefairy was mentioned alongside the new Pokemon's release. This approach may indicate a unique mechanic for Clefable, or this could potentially be how they would introduce future Pokemon that are coming to the roster. Either way, it is best to wait for an official announcement from UNITE! 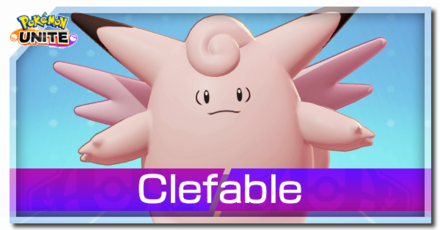 Clefable has joined the Pokemon UNITE roster last October 13, 2022. Weild the power of the moon and grant everyone's wishes with this new Supporter!

For the best builds and items, check out:

Confirmed to be a Supporter

According to the Japanese character spotlight video for Clefable, it is mentioned that the new Pokemon will be a support type that specializes in restricting the enemy team's movements to protect its allies.

List of Supporters: All Supporter Pokemon and Best Builds

Since Clefable is a Supporter, it will likely have an Sp. Attack type for its moves. This is because Supporter Pokemon in the roster, so far, have Sp. Attack for their moves.

Has Above Average Endurance

Like in the mainline games, Clefable to have a above average HP and defenses. Given its nature as a support Pokemon, this will play an important part in realizing Clefable's support capabilities.

Clefable's move focuses mainly on supporting allies, the new Pokemon to have a low damage output. It focuses more on aiding allies in battle, not tanking hits and dealing hits.

Gravity is Clefable's first official move revealed. Clefable creates a zone that persists for a set amount of time. Inside the zone, Clefable's basic attacks change and deal increased damage, while opponents have their movement speed decreased and stops their moves' movement effects.

Moonlight is Clefable's second official move revealed. Clefable continually restores HP to itself and nearby allies for a short duration, and increasing its movement speed while the move is active.

The first move shown in the character reveal video has Clefairy charging and hitting Escavalier while wagging its finger. This move is very reminiscent of Follow Me, one of Clefable's moves in the mainline games. Then it defeats the target with what seems to be a boosted attack.

Wonder Wish is Clefable's Unite Move. Clefable heals nearby allies in an area of effect and gets a random move that either activates immediately or can be used by activating the Unite Move again. 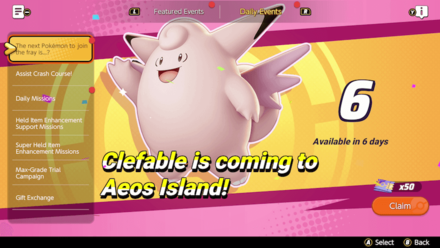 In order for us to make the best articles possible, share your corrections, opinions, and thoughts about 「Clefable Finally Revealed! Release Date and Time | Pokemon UNITE」 with us!