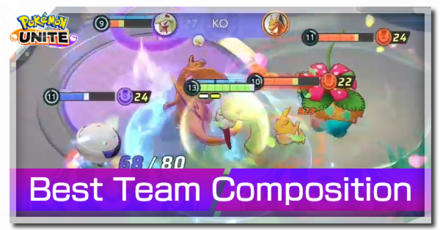 Mew and Mr. Mime for Offense

The combination of Mew and Mr. Mime provides huge damage potential from start to finish. Mew's ability to change its moveset gives the team versitility and utility. Meanwhile, Mr. Mime's tank-like durability and high burst damage makes it an effective frontliner in teamfights. The amount of pressure both Pokemon provide leads to a high chance of early domination in terms of level and score advantage.

Pokemon which have three evolution stages tend to take longer than others to reach their full potential. When three or more of these Pokemon are on a team, it can be difficult for the team to gain traction in the early game. Watch what Pokemon your teammates have picked and avoid stacking too many late bloomers on a team.

It's difficult to maintain a consistent source of damage when your team can only attack up close and personal. Try to make a team with at least one Pokemon who can deal reliable damage from a ranged distance.

It's best to have a good mix of Attack-type and Sp. Atk.-type Pokemon on your team since some Pokemon have different values for Sp. Def and Defense, making them vulnerable against certain Pokemon types.

This is a high-offense team comp centered on Mew and Mr. Mime. This Pokemon duo provides huge damage potential throughout the game. Mew's ability to change its moveset gives the team versitility and utility. Meanwhile, Mr. Mime's tank-like durability and high burst damage makes it an effective frontliner in teamfights. The amount of pressure both Pokemon provide leads to a high chance of early domination in terms of level and score advantage.

Snorlax will accompany Mew in the top lane, helping it apply pressure by tanking damage and setting up kills. Snorlax will try to defend the top allied goal for as long as possible while Mew can rotate lanes to provide more offense.

Aegislash as the Jungler

Aegislash will be the team's jungler. Its objective is to reach level 7 as fast as possible to get both of its primary moveset and hunt down targets. It should also help in securing Regieleki and/or Rayquaza, using Coup De Grace if needed.

Mr. Mime will go bot with Glaceon. They will utilize their early power spike to apply pressure to the bottom lane. Once the late-game starts, these two will provide majority of the team's offense to win teamfights and carry the team.

For the Top Lane, Pokemon that can equip stackable items like Attack Weight and/or Aeos Cookie are good alternative picks.

For the team's Jungler, picks include Pokemon that can take advantage of the extra EXP from clearing Wild Pokemon spawns located in the central area. Dragonite and Greninja are viable alternatives that can become the team's dedicated carry when they are left unchecked.

For the Bottom Lane, Pokemon that have high offense and early power spike like Pikachu and Sylveon are great alternatives. They can apply more early game pressure along with Mr. Mime while also having a reliable teamfight moves.

How to Build a Team

In general, when putting together a team composition of your own, it's good to have the following team balance in mind.

The Tank will be the one that soaks up the damage. They should have high defense so that they can survive being attacked by enemies, and they should have skills that hinder or disable enemies, while not as much as the support, it would still be useful in team fights.

Another good thing they should have is the ability to initiate as they'll be the ones taking most of the skills when they initiate. This isn't a hard requirement but it's nice to have.

Defender Pokemon play this role well, but some All-Rounders can be built as tanks.

Damage dealers need to be able to deal a burst of damage, able to take out enemies quickly. They will be your primary source of stopping power, which is why you can have two of them.

They don't need to be tanky (although depending on the character, they could be), and they don't need a lot of stun because that's the support's job, so they should have primarily damage dealing skills.

In the laning phase, they'll be split up, one on top and one on the bottom, so the other two roles can each look out for them and help them achieve their kills.

Attackers fill this role nicely, but the role could reasonably be filled by All-Rounders or Speedsters.

Support characters should have disabling skills, debuffs for the enemy, for buffs for the team to be effective.

Their job is to be with others and make sure they have the openings to take out Pokemon from the enemy team. Supporters are rarely useful on their own, and they should focus on disabling the damage dealers from the other team.

The best characters for this class are the Support Pokemon.

The Jungler is a unique role that can make or break the game. They don't follow the lanes unlike the other four, rather they head into the central part of the map, which we'll call the Jungle.

They gain the most experience due to not having to share with another player, and because of their unique position, they can affect both lanes by ganking, which is the term for sneaking into a lane and attacking the enemy. This dictates the pace of the lane and determines when objectives can be taken. This is why having high movement speed can help so that you can travel between lanes and clear the jungle quickly.

They also manage to get buffs from defeating Ludicolo and Bouffalant from their respective sides of the jungle.

Speedsters make great junglers, more often than not. Some All-Rounders can be Junglers as well if they're mobile.
Jungle Guide and Best Junglers

What Makes A Good Team Comp?

An example of good team composition is well-balanced, meaning everyone's roles cover for each other's weaknesses.

Their skills must complement each other and make them more effective as a whole rather than acting as five individual units.

In order for us to make the best articles possible, share your corrections, opinions, and thoughts about 「Best Team Comp (Updated September 26) | Pokemon UNITE」 with us!