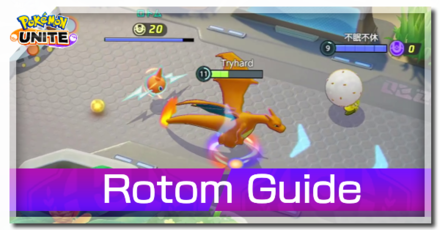 This is a guide on the Wild Pokemon Rotom in Pokemon UNITE. Read on to learn Rotom's spawn time, how and when to beat it, what moves it has, what buff and rewards it gives, and more!

Rotom will spawn at the 7-minute mark of the match. It will appear at the center part of the Top Lane.

Rotom will respawn in exactly 120 seconds (2 minutes) after it is defeated. It will eventually stop respawning when the battle time reaches the last 2:00 minutes of the match.

When Rotom charges a goal, the time it will take for you to score will be instantaneous. It's important to accumulate a lot of Aeos Energy, then score big once Rotom reaches a Goal Zone!

If Rotom manages to reach a goal zone, it disables the Goal Zone's healing and shield effects, preventing the defending team from recovering HP gaining shields when inside it. As shown above, Machamp does not get healed nor shielded even when standing inside the Goal Zone

The number of points Rotom will score decreases as it takes damage from the defending team. As shown above, Rotom's initial 20 points decrease to 16 points when its HP is about 50%.

If the defending team can't defeat Rotom before it reaches the goal, the best option is to deal as much damage as possible to at least lowering the number of points Rotom will score.

Rotom Can Be Pushed to the Next Goal Zone

Rotom can be pushed or knocked back through the use of certain attacks or moves. As shown above, if pushed past the initial goal, Rotom will auto path towards the next one. This stops the enemy from being able to score since the first goal is still up. Utilize Pokemon with shoving or knockback type of moves such as Garchomp or Alolan Ninetales to push Rotom past the goal.

This can be exploited as a defensive tactic. If Rotom is approaching your goal, push it further past it and it'll auto path to the next goal. Once Rotom is in between the 2 goals it'll get slowed down by the lane flux area just like enemy Pokemon. This gives the defending team more time to kill it.

If Rotom does manage to make it to the second goal, it will still score its points. However, the enemy team can't take advantage of the goal that's unlocked because points cannot be scored on a goal before the previous one on the same lane has been destroyed.

Rotom doesn't regenerate the percent health lost but does gain max HP over time. The longer players wait to defeat it the more health it will have.

How to Beat Rotom 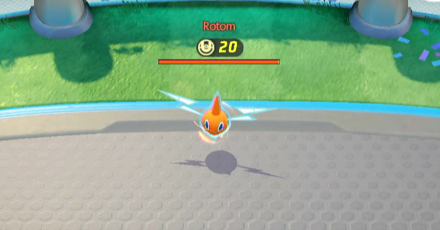 Go to Rotom after Drednaw Fight

When Rotom and Drednaw spawn at the 7-minute mark, it is best to capture Drednaw first for the EXP and shield bonus before pursuing Rotom. Have one ally keep Rotom in-check while another transition to the Bottom Lane.

After fighting Drednaw, it is finally time to capture Rotom. The ideal flow is to destroy the enemy Goal Zone at the Bottom Lane first if your team captures Drednaw. Otherwise, it is best to head to the Top Lane and get Rotom quickly.

One Ally will Defend the Bottom Lane

When your team is transitioning for Rotom objective, have at least one ally take charge to defend the Bottom Lane. This ensures that the first Goal Zone is secured and protected from unnecessary goals. Note that If the Bottom Lane Goal Zone gets destroyed, your team will be at a disadvantage during the second Drednaw fight.

Be Wary of Nearby Opponents when Fighting Rotom

Being located along the lane means that Rotom can easily be contested by both teams. Since Rotom has lower HP and damage output compared to Drednaw, it is relatively easy to defeat it by spamming powerful moves.

An All-Rounder will be enough to hold it at bay while it dishes out hard-hitting moves. You must keep Rotom focused on the melee Pokemon while an Attacker helps by dealing ranged damage. Additionally, a Speedster can provide additional quick attacks while surveying the area for any potential ganks. Once captured, a Defender Pokemon can help by safely escorting Rotom to the enemy Goal Zone to get the charge bonus. 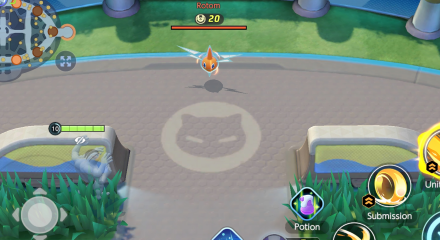 One good strategy is to ambush opponents when they are trying to take Rotom and deliver the final hit to steal the points and effect! Take advantage of the tall grass near the Rotom area and wait for an opening. You can even set your focus on the opponent if their HP gets too low from Rotom's attacks

Push Rotom Towards Your Team's Side

A great way to make sure that your team gets the final hit on Rotom is to use moves that can push it towards your team's side of the lane. This will make it easier for your teammates to focus their attacks on Rotom while discouraging opponents from over-extending their position.

Stay Behind Rotom when Advancing

When escorting Rotom to an enemy Goal Zone, it is best not to go in front of it. Instead, let it absorb most of the damage when opponents are intercepting its path towards a Goal Zone.

When to Beat Rotom

Even though Rotom and Drednaw have similar spawn and respawn times, it is generally better to prioritize capturing the latter first because of its superior effects. Rotom may give your team a point advantage, but Drednaw's EXP boost is better for the long run.

Capture Before the Final Stretch (2:00)

Rotom does not disappear if it is captured before Zapdos spawns. It will still fight for your team and charge a Goal Zone.

When it is Captured by the Enemy

If your team fails to capture Rotom in the first fight, it is advised to quickly defend the lane before Rotom reaches a Goal Zone. When it comes across your allies, Rotom will stop to attack them. Make sure to focus on clearing out the enemy Pokemon first as they deal much more damage, then focus on Rotom.

Rotom has fast, melee attacks that can hit multiple Pokemon in quick succession. It is best not to surround it with melee Pokemon. 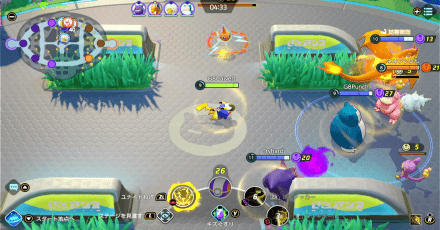 When you are away from melee range, Rotom can shoot balls of electricity at you for as long as you are within its sight. Though it may not have high damage, the attacks could get your HP low enough and leave you vulnerable.

Register as a member and get all the information you want. (It's free!)
Login
Opinions about an article or post go here.
Opinions about an article or post
We at Game8 thank you for your support.
In order for us to make the best articles possible, share your corrections, opinions, and thoughts about "Rotom Buff and Spawn Time" with us!
When reporting a problem, please be as specific as possible in providing details such as what conditions the problem occurred under and what kind of effects it had.