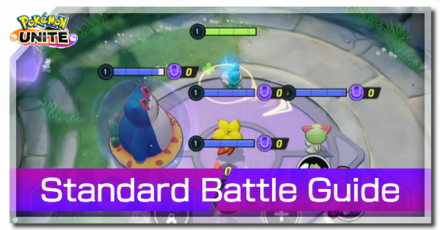 This guide will teach players about the basic rules and mechanics of the Standard Battle feature of the game. Read on to learn more on how to play Pokemon UNITE and understand the rules of the trade! 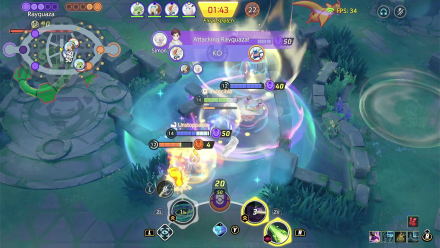 Matches consist of 2 teams with 5 players each. The game is won by the team who scores higher at the end of the match.

There are two 5v5 maps players can choose from, namely Theia Sky Ruins and Remoat Stadium. These maps share mostly the same features but also have unique ones. 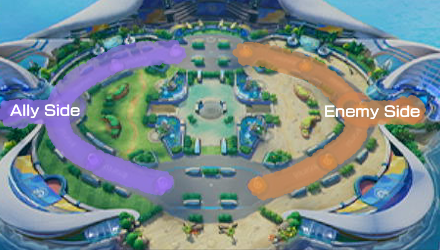 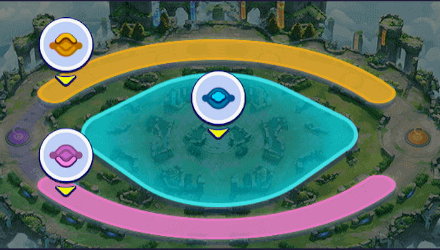 There are 3 routes to choose in Unite Battles - the Top Lane, Central Area, and the Bottom Lane. Each of the two lanes has 3 Goal Zones each. This is where most of the attacking and defending goals happen.

The Central Area, on the other hand, is akin to the Jungle in other MOBA games. Here, there are no Goal Zones, but there are special Pokemon that you can defeat to gain useful buffs!

Defeating Wild Pokemon is the main way to get EXP and Aeos Energy. Doing this will let you learn new moves while accumulating points for you to score at enemy Goal Zones. Note that Wild Pokemon spawns are mirrored for each side of the map, except the Boss Pokemon that appear at a specific time.

Moreover, Wild Pokemon found on Theia Sky Ruins and Remoat Stadium are different, but they mostly function the same.

When you have collected some Aeos Energy, you need to go to the enemy's Goal Zone and deposit that Aeos Energy and score points.

The team that scores the most points at the end of the match (ten minutes for a standard match) will be the winner. In a draw, the team that reached the tied score first wins.

When players pass through allied Goal Zones, they gain a shield and will slowly regain health over time. This is a good mechanic to remember especially when in team fights.

When the match reaches the final 2 minutes, all Aeos Energy deposited during this time is doubled. You can use this mechanic to catch up in case you are behind or to snowball further in the game. 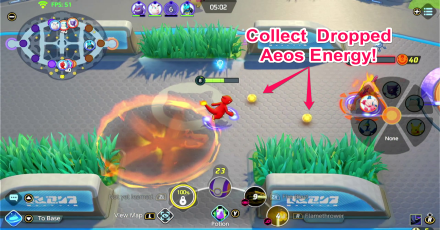 If a player gets taken out, the Aeos Energy they are carrying will be dropped on the ground and any other players can freely pick up the dropped Aeos Energy. Be sure to pick up any Aeos Energy dropped by your teammates so your opponents won't get them.

Boss Pokemon are Pokemon that have a special function when defeated. These special Pokemon add depth and strategy to every match. Defeating them will be key in getting the upper hand on your opponents!

There are 3 Boss Pokemon in Remoat Stadium which have their own unique effects when defeated. Rotom and Drednaw are the first to spawn at the 7-minute mark and will respawn after a set time when defeated. Zapdos only spawns during the final two (2) minutes of the game and will not respawn once defeated.

As for Theia Sky Ruins, there are 5 Boss Pokemon. Regieleki and Regice (or Registeel or Regirock) will spawn also at the 7-minute mark and will respawn after a set time when defeated. Rayquaza only spawns during the final two (2) minutes of the game and will not respawn once defeated.

In order for us to make the best articles possible, share your corrections, opinions, and thoughts about 「How to Play Pokemon UNITE: Standard Battle Guide and Rules | Pokemon UNITE」 with us!