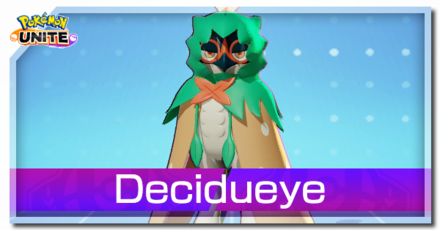 The best guide on how to play Decidueye in Pokemon UNITE for Nintendo Switch and Mobile. Check here for the best builds, Held and Battle items, movesets, as well as the latest nerfs, buffs, counters, matchups, and more!

The Best Build for Decidueye is the one with the gold crown!

This build is centered on seeking and weakening targets using Shadow Sneak and dealing burst damage from afar using Spirit Shackle. This makes Decidueye play more like a sniper and provides the team with consistent firepower from out of nowhere.

Attack Weight is the most important Held Item in the build as it allows you to increase Spirit Shackle's damage exponentially. While it is ideal that you get the full 6 stacks of the item early on, it will be a difficult feat as Decidueye innately lacks mobility moves (outside of Battle Items). Score Shield can help by allowing you to score goals without being interrupted. It can also give Decidueye more survivability as it increases its HP. Lastly, Muscle Band is helpful for Decidueye's early game for farming Wild Pokemon and staving off opponents. Float Stone is a good alternative if you want a direct way of increasing Decidueye's attack stat while getting more mobility,

X Speed gives Decidueye more mobility for repositioning and provides immunity to slows for a duration. Use it to either get away from enemies or pursue them. You can also equip Eject Button for a more direct way of repositioning, albeit with a longer cooldown.

Your Boost Emblem loadout should consist of 6 Brown Emblems for maximum damage and 4 White Emblems for additional HP. Equip Emblems that improve Attack or Movement Speed since you'll mostly be at the backlines shooting Spirit Shackle arrows. You can freely trade Sp. Atk. Sp. Def., and Defense.

This is well-balanced offensive build centered around Decidueye's passive ability, Long Reach, and Boosted Attack. The build can be used either in lanes or jungle. Use Razor Leaf to buff your Standard Attacks attacks, allowing Decidueye to deal damage to multiple targets in quick succession. When the enemy charges you, use Leaf Storm to knock them back so you can maximize your damage via your passive. However, you can learn Shadow Sneak instead for added mobility, and to weaken your targets.

Eject Button adds mobility to Decidueye, allowing you to quickly reposition when things go awry. However, if you want to further increase your damage output, equip X Attack instead.

Your Boost Emblem loadout should consist of 7 Red Emblems for maximum Attack Speed, 2 Brown Emblems for a bit of damage, and 1 Emblem of any color. Equip Emblems that improve Attack or Critical-Hit Rate since you'd want to maximize your basic attack damage, especially during Razor Leaf. You can freely trade Sp. Atk. and Movement Speed.

With the meta favoring burst damage, Spirit Shackle and Shadow Sneak have become the norm when playing Decidueye. The ability to deal high burst damage from afar can cripple the enemy team even before they can engage.

Decidueye's playstyle relies solely on whether you pick Spirit Shackle or Razor Leaf. Choosing Spirit Shackle turns Decidueye into a long-ranged burst damage dealer, while Razor Leaf makes it into a traditional standard attack carry. You can choose either of the other moves to pair with these two.

Which Moveset Do You Think Is Best For Decidueye?

How to Play Decidueye

Focus on Farming Wild Pokemon in the Early Game

Decidueye gets its power spike when it reaches level 7 where it gets to learn Razor Leaf or Spirit Shackle. This means you are stuck with its initial moves for most of the early game. So it is best to get EXP from farming and defeating opponents as much as you can to reach higher levels.

Decidueye's first set of moves - Leafage and Astonish - are meant to reinforce its basic attacks and help lanes deal additional damage. Be sure to pair up with a Pokemon that has HP or Defense so you can have a bodyguard to protect you. It will also help if you position Decidueye near an allied goal zone to get extra shields and HP recovery when needed. Getting knocked down early means losing precious time to get EXP and making your opponents stronger.

Successfully attacking any target a total of 5 times will make Decidueye's Basic attack turn from a single shot into a flurry of quills. Stack up on boosted attacks by targeting Wild Pokemon before you engage with opponents. Reaching full Boosted Attacks allows Decidueye to melt enemies faster because of the increase in attack speed.

Escavalier's Orange Buff increases Decidueye's efficiency in battles, especially when used with Razor Leaf. The slow effect allows you to kite enemies and build up your Boosted Attacks

It's important to note that the slow effect only applies to your primary target. Enemies hit by Razor Leaf's split shot are not affected.

Charge Up Spirit Shackle at a Safe Distance

Always be careful when charging up Spirit Shackles since it makes you a likely target for your opponents. It's best to play from the backlines or behind your allies when using the move.

Filling the Entire Gauge is Unnecessary

Note that you don't have to fill the entire gauge to get the most damage. Instead, you can release the charge once you reach the threshold and it will still hit with max damage.

You can also release Spirit Shackle instantly even before it reaches the threshold to deal quick damage. Although this won't deal max damage, it can be useful in situations where you need a quick and small burst of damage to finish off targets.

Spirit Shackle is a heavy-hitting move that can easily pressure an opponent's HP if it is fully charged. However, it is not a sure-hit move, meaning that it has a chance to miss entirely. If you are having a hard time getting the arrows to hit, you can adjust your game settings to give you more control over targeting with the move.

Turn Off Move Aim Snaps to Nearby Target 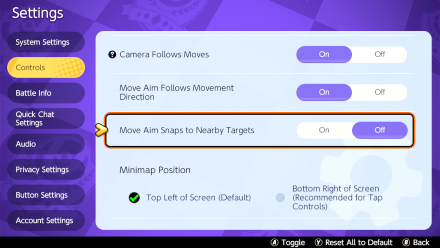 To get the best aim possible, turn off Move Aim Snaps to Nearby Targets. Leaving this setting enabled may disrupt your aiming. This includes snapping to nearby Wild Pokemon or a different opponent. 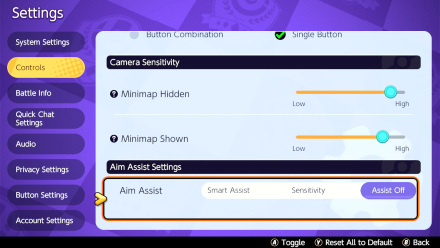 Turning off Aim Assist entirely gives you more influence in determining where the arrow goes when fired. A good strategy is to predict where the target is going and set your aim in that direction.

Choosing Razor Leaf turns Decidueye into a traditional carry Pokemon similar to Cinderace since it improves your attacks.

The split shot effect of Razor Leaf is great for farming grouped Wild Pokemon like the Swablus and Altaria. It guarantees that each attack hits as long as an enemy within range. It is best to activate it as soon as it is available to take advantage of the increase in attack speed and extra damage output.

Shred Enemies from a Safe Distance

It's crucial to create as much distance between you and your enemies when attacking, especially in large teamfights. Decidueye is most effective and deadly if it can freely shred enemies from a safe distance. You can also simply stay behind highly durable allied Pokemon like Snorlax or stay beside healers like Blissey, increasing your chances of survival.

If you don't have any allies nearby, you can utilize objects in the map, such as walls, to create a blockade between you and your enemies. Manuveur around the blockade and shred your enemies with attacks. You can also use Eject Button or X Speed to quickly reposition.

Razor Leaf's attack speed increase allows you to shred through boss Pokemon like Rayquaza quickly. However, once the move is upgraded, you can deal even more damage to them since you deal extra damage the higher their HP is.

Get Out of Confrontations with Leaf Storm

Decidueye lacks any form of Dash moves that can help it escape. Positioning Decidueye at a safe distance not only increases its damage output thanks to Long Reach but also keeps its HP from getting pressured. Pushing opponents who get too close with a Leaf Storm helps Decidueye maintain the distance and set up knockdowns if followed up with attacks. If push comes to shove, it can be used as Decidueye's escape mechanism when it gets compromised.

You can use Shadow Sneak to scout for enemies who might be lurking nearby. It also works on enemies hiding in grass, revealing them for a while.

Use Unite Move Before a Team Fight

Decidueye's Unite move, Nock Nock, does not impact the battle immediately compared to other unite moves. However, it is a great way to slowly chip away at the opponents' HP at a distance before teams clash. Make sure to position Decidueye behind sturdy allies like Defenders or All-Rounders to get extra protection from opponents who try to get close.

Watch Out for High-Burst Pokemon

Pokemon like Gengar or Absoll can quickly knock out Decidueye with their high burst damage. Watch out for Pokemon like them and avoid going near them.

Decidueye can be countered by Pokemon who can quickly swoop down and deliver strong attacks. Once Decidueye's position is compromised, it won't be able to make a clean escape due to its lack of mobility.

Even Matchups for Decidueye

Decidueye has enough firepower against these Pokemon that it outweighs its lack of defense.

Being a glass cannon, you should always maintain your distance from any opponent and take advantage of your long-ranged moves. Outside of Battle Items, Decidueye does not have any proper dash moves that can help it escape dangerous situations.

Avoid Their Moves and Kite

Take advantage of Decidueye's high damage output with its Boosted Attacks and punish these Pokemon for getting close to you.

Upcoming Pokemon dates are in UTC+0.

See more comments (56 Comments)
Opinions about an article or post

In order for us to make the best articles possible, share your corrections, opinions, and thoughts about 「Decidueye Guide: Builds and Best Items | Pokemon UNITE」 with us!