How to Recover HP | Pokemon UNITE 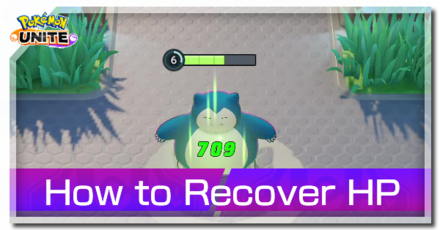 This is a guide on how to recover HP in Pokemon UNITE. Read on to learn the different ways players can recover HP during matches, things that affect HP recovery in the game, and strategies for recovering HP efficiently!

How to Recover HP

Go Back to the Starting Point

Allied goal zones provide constant healing and shielding to Pokemon who are inside it. At the early stages of the game, utilizing the healing from goal zones is the best means for survival in the lane.

The healing and shielding effects from goal zones are disabled when Rotom to reaches the goal, or when the enemy defeats Zapdos.

Use the Potion Battle Item 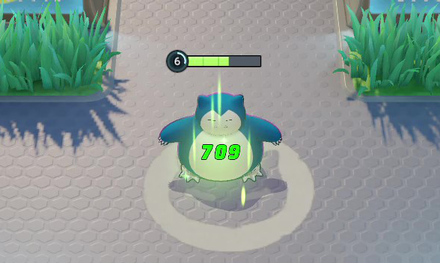 Potion is the only battle item that provides a direct heal to Pokemon when used. Using potion at certain situations is key to using the item effeciently.

Potion Effect and How to Get 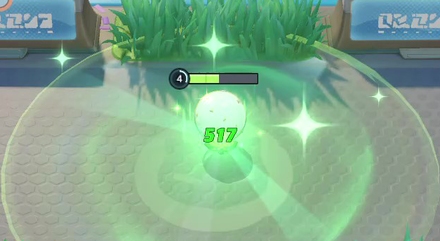 Certain moves provide some form of healing. Recovery type moves are generally understood as the best move type for healing. However, there are moves of a different type that can provide healing.

Pokemon that Recovers HP with their Boosted Attack

Some Pokemon are able to recover HP when they hit a boosted attack.

Pokemon are able to recover HP equal to about 3% of their max HP when they defeat wild Pokemon. Defeating wild Pokemon that are grouped together like Vespiquen and Combee can provide tons of healing instantly.

There are Held Items that provide some sort of healing to Pokemon when equipped. Choosing which Held Items to equip depends on a player's playstyle.

Successfully scoring points heals Pokemon for about 25% of its max HP. The amount of points scored does not affect the heal amount. This means that scoring low points can be an effective way to recover HP when no other way is available.

Tips and Tricks for Recovering HP

Utilize the Healing and Shielding from Goal Zones

Early into the match, players can utilize the healing and shielding from goal zones as means for survivability in their lanes. As much as possible, players should avoid going back to the starting point just to heal up.

Save Yellow Berries for Dire Situations

Often time players go straight for the Yellow berries to recover HP. However, it is best to save them for defending goal zones, or escpaing ganks from enemies, and find other means of healing, such as goal zones. Having them always available for dire scenarios like these is the most effecient way to use Yellow berries, and can even turn the outcome around.

Steal Yellow Berries from the Enemy's Side

When diving enemies in their outer goal zones, they will not hesitate to pick up the Yellow berries just behind the goal to instantly heal, and force the other team to retreat. To prevent this from happening, try to be ahead of the enemy to steal the Yellow berries behind their goal, and ensure that they won't have any additional means of healing.

This forces them to either retreat back to their base to heal, or risk getting killed should they decide to go inside their goal zone for healing instead.

Since the amount of points scored does not affect the heal amount when scoring, an effective strategy to recover HP is to score low points. The lower the points, the faster the scoring guage fills up.

This can be accomplished even when there are enemies gaurding the goal zone. Equipping Score Shield makes this startegy easier since the shield given by the item buys enough time for the Pokemon to score and recover HP.

Use Potion Only During Fights

The most effecient way to use the Potion battle item during a close fight. The trick is to keep trading blows with the enemy, luring them into a false sense of security, then use the potion to heal up instantly. This ensures that the player gets the HP advantage at the final moments of the fight, and that the enemy gets defeated.

Certain combinations of Held Items can improve the healing they provide during fights. The key is to understand how those Held Items that provide healing work, and what factors like stats affect their healing. However, some combinations might not exactly the best combination.

Shields can act as a 'temporary bonus HP' for Pokemon, enabling them to survive longer in fights. The best way to utilize shields during battles is by stacking as many sources of shields as possible. This can theoretically double the amount of HP a Pokemon can have in an instant.

In order for us to make the best articles possible, share your corrections, opinions, and thoughts about 「How to Recover HP | Pokemon UNITE」 with us!