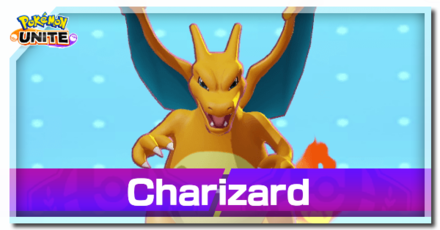 The best guide on how to play Charizard in Pokemon UNITE for Nintendo Switch and Mobile. Check here for the best builds, Held and Battle items, movesets, as well as the latest nerfs, buffs, counters, matchups, and more!

The Best Build for Charizard is the one with the gold crown!

This build focuses on keeping a safe distance from enemies while poking them with offensive abilities. It also doubles as a jungle build. Make sure to take advantage of the speed bonus from Flamethrower, allowing Charizard to have good mobility and distance from the enemy when in a fight. Fire Blast decreases enemy movement speed, offers continuous burn damage over time, and zones out any slower enemy Pokemon that want to assist teammates engaged with Charizard.

Seismic Slam serves as a finishing blow for any enemy Pokemon that get too close, as it deals insane amounts of standard attack damage during the duration. Plus, it also makes Charizard immune to crowd control.

Full Heal allows you to counter crowd control, especially while your Unite Move is not yet available or is on cooldown. You can also use X Speed for more mobility.

Your Boost Emblem loadout should consist of 6 Brown Emblems for maximum damage and 4 White Emblems for additional HP. Equip Emblems that improve Attack or Critical-Hit Rate since you'd want to clear the Jungle as fast as possible to level up. You can freely trade Sp. Atk, Defense, and Sp. Def.

This is another damage build centered on utilizing the mobility you get when you hit a target with Flamethrower and Flare Blitz's dash capabilities to stick to targets or maneuver around them for easy pressure. The key to this build is to play safe until you reach level 9 and fully evolve and get the many stacks of Attack bonuses from Attack Weight.

Muscle Band provides enough firepower to your Standard Attacks as you burn through targets. Attack Weight gives you extra Attack to increase your overall damage out. Utilize the extra movement speed you get from your moves to get quick scores and get stack bonuses. However, if you want a more straightforward way of increasing your attack without the need of scoring goals, you can run Weakness Policy instead for more static damage and a bit of HP. Lastly, Focus Band gives Charizard more survivability for early game skirmishes.

X Speed is the default battle item for this build, giving a sudden boost of speed when needed. However, you can also equip Eject Button for a similar effect.

Your Boost Emblem loadout should consist of 6 Brown Emblems for maximum damage and 4 White Emblems for additional HP. Equip Emblems that improve Attack, Critical-Hit Rate, or Movement Speed since the build is a mix of damage and mobility. You can freely trade Sp. Atk, Defense, and Sp. Def.

This is an all-in damage build that is centered around taking out a single target quickly using Flare Blitz, Fire Punch, and Seismic Slam. You'll be using the Seismic Slam Setup Combo (Variation 1) as your core method of defeating targets.

Muscle Band and Scope Lens increase your Standard Attack damage via attack speed, percentage-based damage, and critical hits while you are in a Seismic Slam. Moreover, Energy Amplifier is your core item for the build, reducing your cooldowns, increasing your Unite Move recharge rate, and amplifying your damage output further after you use your Unite Move.

Full Heal ensures you'll be able to perform your combo safely. However, you can also equip Potion for a reliable low-cooldown healing instead.

Your Boost Emblem loadout should consist of 6 Brown Emblems for maximum damage and 4 White Emblems for additional HP. Equip Emblems that improve Attack or Critical-Hit Rate since you'd want to clear the Jungle as fast as possible to level up. You can freely trade Sp. Atk and Movement Speed.

With the recent All-Rounder lineup, it is clear to see that Charizard struggles to keep up in terms of damage when it comes to close-range team fights. That's why focusing on ranged abilities that deal damage over time is its best kit right now.

If you want to adopt a more upfront and in-your-face playstyle, you can choose to go with a Fire Punch and Flare Blitz combo!

Which Moveset Do You Think is Best for Charizard?

How to Play Charizard

Charizard is an All-Rounder Pokemon that can push the advantage in team fights with its high damage output However, it takes a while to get this particular Pokemon set up. Gathering as much EXP as possible, especially during the early game, is paramount. Try your best not to engage in skirmishes with the opposing team to avoid getting knocked down early. Only get aggressive when enemies over-extend or you are getting support from your team's jungler. Also, it is important that you keep close to allied goal zones to get HP recovery.

Charizard reaches its power-spike when it fully evolves at level 9. This may be a high hill to climb, considering that some Pokemon in the roster can easily overpower Charizard even if they learn their move upgrades. Fortunately, the pay-off is worth the time as Charizard's lethality significantly increases, and can also afford to position more aggressively in team fights once it unlocks its Unite Move. So, farming Wild Pokemon to get to higher levels should be the priority.

Fire Spin is a great utility that can help Charizard during the early to mid-game. It increases Charizard's range as you can deal continuous damage to enemies caught in the affected area. Use it to pressure ranged opponents or deploy it where your target is to help you get ahead in brawls. For defensive plays, set up a Fire Spin on an allied goal zone to make it hard for opponents to score. Additionally, use the move to inflict slow for an easy retreat.

Since Charizard can move during its Standard attack animation, you can easily stick to running while attacking for maximum pressure. It is best to circle your targets as you may be able to make them miss their moves if they are not sure-hits.

While Charizard is more than capable of brawling with opponents, the Pokemon is currently the weakest All-Rounder in terms of endurance as it does not have any way of sustaining itself. For the most part, you will have to rely on your kit through status effects. Because of this, it is advised that you always stick to allies, particularly Supporters, so that you can increase your survivability during fights.

Based Your Moveset on Playstyle 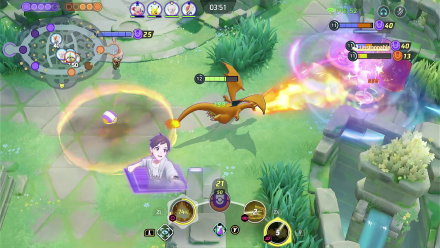 Charizard's kit is well-balanced and offers multiple ways to play the Pokemon. Although you can practically use any move combination, choosing the right one will help you realize Charizard's playstyle.

If you are looking to focus on direct offense with Charizard, then choosing Fire Punch and Flare Blitz will allow you to have maximum engagement in up close and personal brawls because of their disabling capabilities. Additionally, both of these moves give Charizard much-needed mobility that can get it closer to its targets while also inflicting damage. Since Charizard can easily reposition while attacking, make sure that you're always positioned in the area your enemy wants to escape to so you can push them back into a tight spot.

If you want to avoid jumping into the middle of a team fight and prefer to poke enemies from afar, then choosing Flamethrower and Fire Blast turns Charizard into a ranged damage dealer ideal for team fights. Although you are trading off consistent mobility for ranged attacks, this move combination provides status effects that can help you get the upper hand. Flamethrower gives Charizard a boost in movement speed, allowing for better repositioning and keeping a safe distance. Fire Blast reduces the movement speed of enemies caught within the ring.

Charizard becomes empowered for a short duration after picking up and slamming an opponent with a Seismic Slam while wreaking havoc with fire breathing. This gives Charizard movement speed, damage, and the ability to move over walls. Use your other moves before using Seismic Slam so you can focus on dealing damage with your standard attacks while in the empowered state. 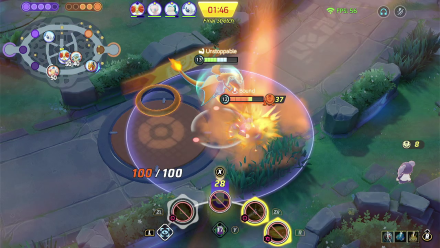 For the best value, seek out low HP opponents like Attackers or Supporters for the move's initial slam to instantly take them out of the fight. After that, you can proceed to bombard other opponents with enhanced attacks for the clean-up!

Being the squishiest All-Rounder in the roster, Charizard can easily be countered by Pokemon that have disabling moves and better damage output. This makes Charizard an easy target in the early game.

Even Matchups for Charizard

Charizard has a slow early game. Fighting against these Pokemon may prove to be difficult, especially at low levels. Make sure to fully evolve first, so you can have a fighting chance against them. Only activate Seismic Slam if you need a burst of strength to save yourself from getting knocked down.

Get Strong Before Fighting

Burn Through the Sustain

Charizard's damage will be enough to pressure these Pokemon, especially at full evolution. Make sure to target low HP opponents first so you can cut them off in the team clash. A Seismic Slam activation is enough to burn through these Pokemon without any difficulty.

Can't Sustain Through the Damage

In order for us to make the best articles possible, share your corrections, opinions, and thoughts about 「Charizard Guide: Builds and Best Items | Pokemon UNITE」 with us!