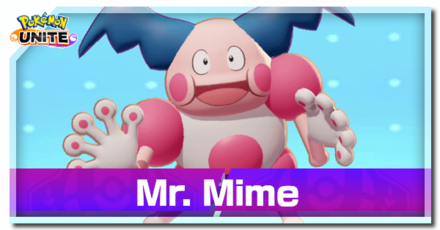 The best guide on how to play Mr. Mime in Pokemon UNITE for Nintendo Switch and Mobile. Check here for the best builds, Held and Battle items, movesets, as well as the latest nerfs, buffs, counters, and more!

The Best Build for Mr. Mime is the one with the gold crown!

This build balances Mr. Mime's burst capabilities with Confusion and its utility from Power Swap. Your gameplay should focus on contributing to the team's offense by displacing enemies with Confusion and opening up opponents for your team to take advantage. You will want to use Power Swap to link with allies and get heals and a movement speed bonus.

Choice Specs and Wise Glasses provide more than enough Sp. Atk boost to maximize Confusion's damage. For the best value, make sure you push enemies toward a wall to deal more damage while also stunning them for a short time. Buddy Barrier gives you durability through HP and a team fight tool when you use your Showtime!. However, you can equip Focus Band instead for better static defenses and quick heals when your health falls dangerously low.

X-Speed gives Mr. Mime a consistent way to increase its movement speed and get past enemy crowd control. It also allows Mr. Mime to keep up with allies or opponents when they are tethered to Power Swap, prolonging the effect for as long as possible.

Your Boost Emblem loadout should consist of 6 Green Emblems for maximum Sp. Atk. boost and 4 White Emblems for extra durability. Equip Emblems that improve Sp. Atk or HP since you'd want to balance offense and defense for the build. You can freely trade Attack and Critical-Hit Rate.

This is Mr. Mime's standard support build centered on stopping enemy movement with Barrier and debilitating them with Psychic explosions. Gameplay consists of keeping the front line secured with walls and making it hard for your opponents to maneuver around the battlefield. You can also cut off single targets with the walls and trap them in place with Psychic triggers.

Exp. Share is an essential support item, giving you increased movement speed and HP and allowing you to catch up in levels since you'll be letting your allies farm wild Pokemon. Focus Band and Buddy Barrier provide ample durability and survivability, enabling you to stay alive longer to keep supporting your allies.

X Speed allows you Mr. Mime to maneuver around the battlefield while negating enemy crowd control. You can also equip Potion to take advantage of the boost in HP you get from your item loadout and further increase you survivability.

Your Boost Emblem loadout should consist of 6 White Emblems for maximum HP and 4 Emblems of any color. Equip Emblems that improve HP, Defense, or Sp. Def since you'll mostly be using Power Swap on allies. You can freely trade Attack, Critical-Hit Rate, and Movement Speed.

This is a support build that offers more offense by setting up walls in the battlefield with Barriers and dealing burst damage using Confusion.

Wise Glasses provides a decent static Sp. Atk boost and scalable one via its percentage-based effect. Additionally, Shell Bell provides extra Sp. Atk. and HP recovery when you hit enemies with moves. The item also reduces your move cooldowns a bit, which will help you get consistent activations. Lastly, Buddy Barrier increases your durability through HP while also giving a team fight tool.

X Speed is the default Battle Item for the build due to its versatility. However, if you prefer a more direct way of repositioning and escaping, equip Eject Button instead.

Your Boost Emblem loadout should consist of 6 Green Emblems to maximize your moves' damage and 4 Emblems of any color. Equip Emblems that improve Sp. Atk since you'll be investing more in the offense for the build. You can freely trade Attack, Critical-Hit Rate, and Movement Speed.

This build is centered on aggressive early-game scoring to increase Mr. Mime's HP and Sp. Atk stats via its items. You will be using Power Swap and Psychic as your primary moveset for the build, utilizing its damage when linked to opponents and the combo's wide, AoE range. Getting the full stack bonuses increases both of Mr. Mime's Sp. Atk. and HP, which augments Power Swap's damage and healing.

Sp. Atk Specs and Wise Glasses have great synergy since Sp. Atk Specs benefits from Wise Glasses' percentage-based Sp. Atk boost, giving you more than a fixed amount of Sp. Atk as you score points. Aeos Cookie acts as your defensive item due to the HP boost, especially when fully stacked. However, should you want more direct survivability, replace the item with Focus Band instead.

X Speed is a must for the build due to its versatility, enabling you to quickly move to goal zones and score, and be aggressive or defensive.

Your Boost Emblem loadout should consist of 6 Green Emblems to maximize your moves' damage and 4 White Emblems for additional HP. Equip Emblems that improve Sp. Atk or HP since those stats are central to the build. You can freely trade Attack, Critical-Hit Rate, and Movement Speed.

When it comes to score stacking, it is important to get the full six (6) stack bonus as early as possible when opponents have not learned their strong moves yet. To do this, make sure to only attempt scoring when you have below 5 energy so you will not get easily interrupted. Fortunately, Mr. Mime has great early-game stats that can prevent it from falling easily. You will have to depend on X Speed to either get to goal zones quickly or escape to safety after scoring.

Mr. Mime's moveset offers a great mix of utility moves that can shift between offense and defense. The moveset above generates the most flexibility in terms of damage and support. If you prefer to face opponents head-on during brawls, learning both Power Swap and Psychic are great moves to have, especially when you want to take a more aggressive role. Alternatively, both Barrier and Confusion offers great disruptive opportunities that your teammates can take advantage of.

Which Moveset Do You Think is Best for Mr. Mime?

How to Play Mr. Mime

Control the Lane with Walls

During the early game, take advantage of Light Screen to block off enemies from securing Wild Pokemon spawns in the lanes. You can also trap opponents who overextend by putting the walls at the goal zone, allowing for easy knockdowns early on.

Once you reach level 6, start to get aggressive and put pressure on the enemies since you now have both of your moves. If there are late-bloomers like Charizard or Cinderace, prioritize them to cripple their progression in the late-game.

Try to stay in the thick of things during a clash with your opponents. Your passive ability, Filter, gives you a surprisingly solid amount of Defense, allowing you to tank some damage for your team.

Get AoE damage with Psychic

Get Psychic if you prefer an aggressive playstyle. Try to set it up properly to get the most out of it whether you're using Barrier or Power Swap.

Psychic is also a great tool for securing grouped wild Pokemon like Altaria and Swablu spawns, and Natu spawns.

In the early game, while you still don't have your other move, you can use Light Screen on their spawn locations, then activate Psychic for more damage.

Use Power Swap for Max Aggression

Choosing Power Swap over Barrier at Level 6 turns Mr. Mime into a viable damage dealer. Remember to tether first using Power Swap, get close to your target, then activate Psychic for max damage.

While Mr. Mime's Unite Move, Showtime!, doesn't deal great damage, it has a great area stun effect, making it an effective teamfight move. Use it to initiate teamfights, but remember to catch as many targets as you can and stay close to them for the full duration.

This set of combos uses Light Screen or Barrier to not only block enemy movement, but also deal decent amount of damage by combining it with Mr. Mime's other moves.

Mr. Mime cannot easily KO other Pokemon if it's unable to move or is from setting up its burst damage. Moreover, Mr. Mimes lack of mobility moves makes it an easy target to sorround.

Even Matchups for Mr. Mime

Mr. Mime can have the upper hand against these Pokemon if it properly set up its burst moves without interruption.

Stop or Slow them When they Charge

Pokemon with low mobility, low health or have no effective crowd control are easy targets for Mr. Mime.

Disable them and Disrupt their Attacks

In order for us to make the best articles possible, share your corrections, opinions, and thoughts about 「Mr. Mime Guide: Builds and Best Items | Pokemon UNITE」 with us!