Spectator Mode: Features and How to Use | Pokemon UNITE 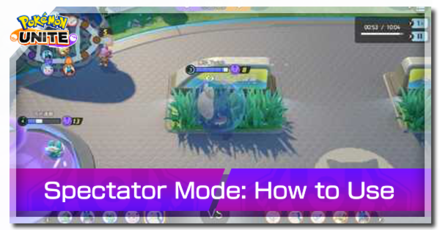 How to Spectate Players

You can only spectate either Top-ranking trainers or trainers in your friends list that are currently playing. You can also choose whether the matches you want to watch are Ranked Matches, Standard Matches or Quick Battles.

Do take note that if you want to watch an ongoing match, you have to wait for the match to run for 2 minutes before you can start spectating. This is to prevent cheating via stream sniping.

How to Use the Spectator Mode

You can watch the matches at 1x, 2x, 4x, or 8x speed until you reach the latest point of the match. You will then be forced to watch it at 1x speed, unless you pause and let the match playout. Pausing will allow you to freeze the match, but still allow you to swap between each Pokemon.

You can cycle between the Pokemon in the match you are watching, allowing you spectate all the players on both teams.

The number above the Pokemon Icons shows the player's scored points. You can also view each player's battle record by bringing up the scoreboard. Here, you can check the number of knockdowns, support times, and the battle items and techniques each player used.

If you are done watching the match you can quit spectating at anytime!

What is the Spectator Mode?

Spectator Mode is a mode used to view other trainer's matches live! It can be one of your friends or a random top-ranking trainer. This is a staple feature in other competitive games and is mostly used for improvement. You can watch players at the top level and learn builds, strategies, and techniques that got them to the top!

In order for us to make the best articles possible, share your corrections, opinions, and thoughts about 「Spectator Mode: Features and How to Use | Pokemon UNITE」 with us!