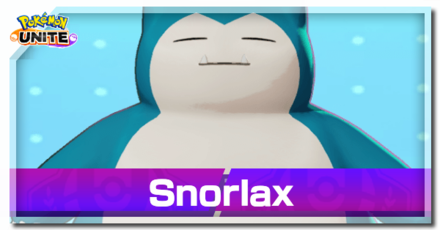 The best guide on how to play Snorlax in Pokemon UNITE for Nintendo Switch and Mobile. Check here for the best builds, Held and Battle items, movesets, as well as the latest nerfs, buffs, counters, matchups, and more!

The Best Build for Snorlax is the one with the gold crown!

This is an all-defensive build designed to put Snorlax in front of its allies as it leads the charge via Heavy Slam and keep enemies at bay using Block.

Focus Band and Buddy Barrier allows Snorlax to receive tons of damage from the enemy while protecting allies. These items increase Snorlax's overall survivability so you can stay in the fight for much longer. The damage you soak up will be converted into extra Attack because of Weakness Policy, giving you additional offense for counter attacks.

Eject Button enables you to get a better position to use your moves, making it a must-have battle item. Note that you can reposition yourself while you are using Block.

Your Boost Emblem loadout should consist of 4 Blue and Purple Emblems for better defenses and 2 White Emblems for a bit of HP. Equip Emblems that improve Defense, Sp. Def., or HP since you need to be as durable as possible when fighting in the frontlines. You can freely trade Sp. Atk and Critical-Hit Rate.

This build another defensive build but is centered around disabling enemies using Heavy Slam and Yawn allowing you to set up kills for your team.

Focus Band and Buddy Barrier are straight-forward defensive items, giving durability and survivability. Energy Amplifier is mainly so you can use your Unite Move more frequently since it has a decent AoE disable.

Eject Button serves the same purpose as the previous build.

Your Boost Emblem loadout should consist of 7 Black Emblems for maximum move cooldown reduction, 2 Green Emblems for a bit of damage, and 1 Emblem of any color. Equip Emblems that improve HP since your gameplay is only disabling targets and setting up kills for your team. You can freely trade Sp. Atk and Critical-Hit Rate.

This is an offensive build focused on disabling a target with Yawn and following up using Flail to deal high attack damage. The damage you deal with Flail depends on Snorlax's missing health. This means the higher your max HP is, the more damage you deal.

Muscle Band and Scope Lens are your core offensive items and synergizes well with Flail. You can replace Scope Lens with Razor Claw for the movement reduction effect. Focus Band provides decent defense boost and a reliable survivability tool, enabling you to stay alive longer in fights.

Slow Smoke works great in this build, allowing you to drastically slow enemies as you pummel them down with Flail. However, you can equip X Attack instead if you want more damage.

This is an optional due to it's situational use however, it is also worth noting that using Drain Crown as a held item works really well when Yawn hits multiple enemies, followed up by Flail since it deals AoE damage, and 10% of the total damage dealt on all enemies is the total healing that Snorlax gets.

Your Boost Emblem loadout should consist of 7 Red Emblems for maximum Attack Speed, 2 Brown Emblems for a bit of damage, and 1 Emblem of any color. Equip Emblems that improve Attack, HP, or Critical-Hit Rate since all of them affects your damage during Flail. You can freely trade Sp. Atk and Movement Speed.

Potion gives you a burst of healing so you can stay in the fight longer.

Your Boost Emblem loadout should consist of 6 Brown Emblems for maximum damage and 4 White Emblems for additional HP. Equip Emblems that improve Attack, HP, or Critical-Hit Rate since all of them affects your damage during Flail. You can freely trade Sp. Atk and Movement Speed.

It is important to get at least 4 stacks of bonuses during the early parts of the match so you can focus on defeating opponents as the game transitions to the mid-game. Do this by taking advantage of the Top Lane's short, narrow paths to chip in a couple of scores to build up your bonuses. Tackle will be a great tool for quickly defeating Wild Pokemon and dashing towards an enemy goal zone for quick scoring. You can even use it as a means of escape from danger when you are caught in a bad position.

Snorlax specializes in getting in the enemy team's face, disabling them and taking hits for the team, giving them space to deal damage to the enemy. Both of these moves help Snorlax fulfill its role. However, if you prefer a more direct playstyle that can contribute to the team's offense, learn Flail and Yawn instead.

Which Moveset Do You Think is Best for Snorlax?

How to Play Snorlax

Your primary job throughout the game is to accompany the team's damage dealers and provide crowd controls. You also should be fighting in the frontlines to soak damage from the enemy team, allowing the damage dealers to safely attack and use their moves. If you see enemies targeting your team's damage dealers, quickly come to their aid and throw yourself into the fight to tank damage.

Take advantage of Snorlax's strong initial moveset in the early game to get some advantage for your team. It will translate into a better mid game and late game for you and your team if done flawlessly.

Get Early Knockouts with Tackle

Use Tackle to secure early knockouts. You can use the Tackle Combo for maximum damage.

Use Rest in Grass or on Goal Zone

It's best to use Rest in grass to heal up safely. You can also use it while standing on an allied goal zone for faster healing.

Take advantage of the movement speed increase from Gluttony. It's useful in certain scenarios like stealing Yellow Berries from the enemy or escaping.

Zone Out Enemies with Block

Use Block to zone out enemies from objectives or discourage them from approaching.

Trap Targets on Walls or Objects

If there are walls or objects nearby, shove enemies towards them to trap them in place using Block.

You can also use Block to cut off the enemy's path. Use the Heavy Blocks Combo for proper execution.

When using Heavy Slam, try to anticipate your enemy's movement and time it so you'll land directly on top of them.

Use Power Nap in the Middle of a Teamfight

Use Power Nap when there are many enemies near you and you're low on HP, especially during teamfights. The move not only recovers your HP but functions as a crowd control.

You can also use Power Nap while your inside an allied goal zone to defend it since the move deals damage over time in an area which can interrupt scoring.

Except for Heavy Slam, Snorlax has short-range attacks and Moves making it difficult to get to enemies farther away. Ranged Pokemon will have an easier time brawling with Snorlax since they can whittle away at its health from afar. For melee Pokemon, it is best to bait out and exhaust Snorlax's moves before you can attack with yours.

Even Matchups for Snorlax

Take advantage of Snorlax's innately high durability to pin down opponents during a brawl. It is best to pair up with Pokemon with high damage output like Attackers so they can follow through with attacks after you disable opponents.

Utilize Snorlax's crowd control to shut down combos and make it hard for aggressors to get proper attacks in.

See more comments (19 Comments)
Opinions about an article or post

In order for us to make the best articles possible, share your corrections, opinions, and thoughts about 「Snorlax Guide: Builds and Best Items | Pokemon UNITE」 with us!