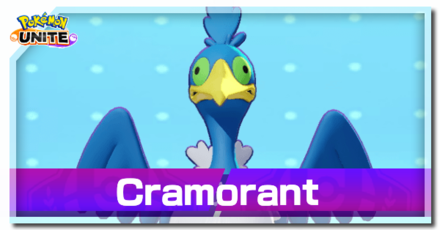 The best guide on how to play Cramorant in Pokemon UNITE for Nintendo Switch and Mobile. Check here for the best builds, Held and Battle items, movesets, as well as the latest nerfs, buffs, counters, matchups, and more!

The Best Build for Cramorant is the one with the gold crown!

This build utilizes the Hurricane and Surf combo to cause havoc and knock enemies around in fights, making them vulnerable for follow-ups from allies. Though the moves can be interchangeable, we suggest using Surf first before Hurricane to slow targets long enough for Hurricane's disable to take effect and maximize the damage. If you successfully knock up enemies with Hurricane, the second wave from Surf will most likely hit targets as well.

Wise Glasses and Choice Specs give enough damage boost to make an impact in the game and can burst down low HP opponents. Focus Band gives Cramorant more durability when Surf pulls opponents towards you.

Eject Button gives Cramorant the mobility it needs to maneuver around fights. This is especially helpful if you miss your moves. Moreover, use it to get aggressive or escape from enemies.

This build is centered around using Dive to get close to targets, then following up with Air Slash, maximizing Air Slash's damage and cooldown reduction. Try to play around Dive's charges, using 1 charge against a target, damaging them using Air Slash, then retreating. Do this until the target's HP is low enough that you can commit for a knockdown.

For items, we are going all-in on increasing Cramorant's Sp. Attack with Wise Glasses, Choice Specs. The additional heal from Shell Bell gives Cramorant gives a bit of sustain when you hit opponents with moves. Alternatively, if you're capable of sneaking goals in the early game, you can replace Shell Bell with Sp. Atk. Specs, giving you more damage in the late game. The mobility you have from Dive should be enough to make sneaky plays to fully stack Sp. Atk. Specs.

Slow Smoke gives you a great disabling tool to contain opponents in one place to set up Dive hits. When things go awry, you can use it to get out of dangerous situations.

This build focuses on maximizing the damage of Cramorant's Unite Move, Gattling Gulp Missile. The downside to this build is it requires Cramorant to reach level 9 to take advantage of its held items, making the early game harder to endure.

Potion works well with the increase in HP given by Buddy Barrier, giving Cramorant extra survivability, especially after its Unite move is finished casting.

A well-placed Hurricane followed by the crashing waves of Surf is a simple yet devastating combo that sets up easy knock downs. If that's not your style, trying out a more aggressive combo with Air Slash and Dive might be more your speed.

Which Moveset Do You Think is Better for Cramorant?

Cramorant is a long-ranged whiz who excels where enemies cannot touch him. His skills are all from afar and area of effect, so expect him to kill a crowd, not control it.

Get Presssure you Opponents with Whirlpool 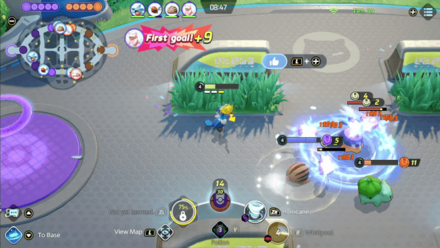 Whirlpool is the move you want to get at Lv. 1 as it allows you to farm Wild Pokemon and deal continous damage to your opponents from afar. Feather Dance can reduce your opponent's attack and movement speed, but it does not do any damage, so get Whirlpool instead.

Farm Wild Pokemon and get to Lv. 6 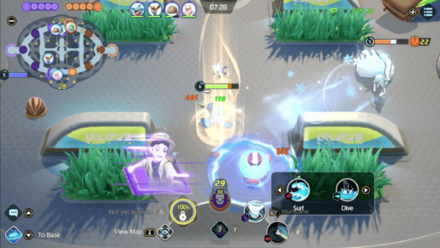 Farm every wild Pokemon you can so you quickly gain access to Cramorant's powerful moves. At Lv. 4, you can learn Hurricane which will be your main disabler. Then, at Lv. 6, you will learn Surf. From here, you can now pressure your opponent's HP from afar while also disrupting their positioning. 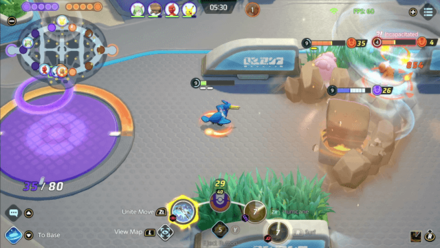 Cramorant does not have a lot of health or survivability. It can be taken out of the fight quickly if target by high burst damage Pokemon like Lucario and Zeraora. Stick close to your Defenders like Snorlax, Crustle, and Slowbro, and use them as a shield while you deal damage behind them. 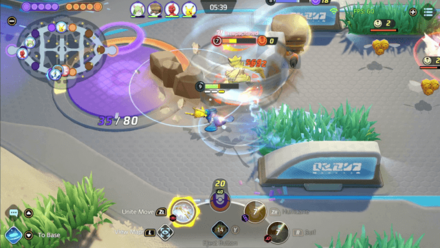 Cramorant has a strong burst combo with Hurricane then Surf. Hitting Hurricane will knock the Pokemon into the air and make it easier to hit your Surf, dealing high burst damage and slowing the Pokemon. The combo is also a good way to set up offensive plays with allies as it disables opponents from the fight for a short time. 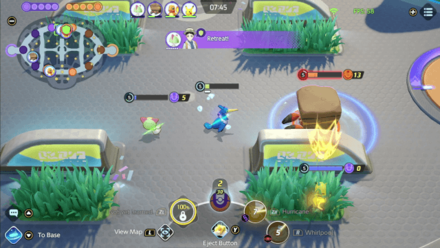 Try to work together with the other Pokemon in your team, especially when they have disables. Try to wait for your teammate to use these disables first and it will guarantee your Hurricane + Surf combo will hit. Examples of moves you can follow up are Snorlax's Heavy Slam, Pickachu's Electro Ball, and Slowbro's Telekinesis.

Use Gattling Gulp Missile at a Safe Position 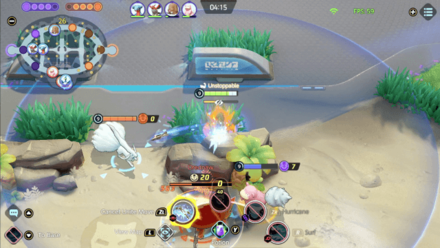 When using Cramorant's Unite move, you are able to deal a ton of damage in a short amount of time, but at the cost of being unable to move. This can make it easy for other Pokemon to get to you and take you out during your Unite move. You will want to be at the back of your team when you use it to make it harder for the enemy team to reach you.

Cramorant can quickly lose a fight when its opponent manages to get close and burst him down. Also, keep in mind that most of Cramorant's moves can be avoided if you can dodge them with quick reactions and good timing.

Even matchups are always a matter of skill, luck and timing. Here are some tips to help push Cramorant ahead against other Pokemon on equal footing.

Burst Them Down Before They Can Get Close

See more comments (7 Comments)
Opinions about an article or post go here.
Opinions about an article or post
We at Game8 thank you for your support.
In order for us to make the best articles possible, share your corrections, opinions, and thoughts about "Cramorant Guide: Builds and Best Items" with us!
When reporting a problem, please be as specific as possible in providing details such as what conditions the problem occurred under and what kind of effects it had.