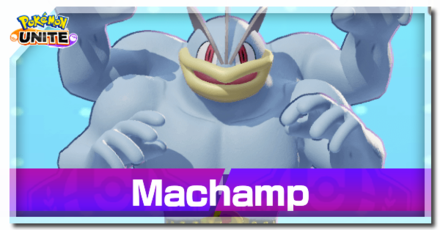 The best guide on how to play Machamp in Pokemon UNITE for Nintendo Switch and Mobile. Check here for the best builds, Held and Battle items, movesets, as well as the latest nerfs, buffs, counters, and more!

The Best Build for Machamp is the one with the gold crown!

This build utilizes Machamp's critical-hit potential with an easy burst combo. Your gameplay involves cutting off single targets and with Submission then quickly following it up with a Cross Chop to increase Machamp's critical hit rate.

X Attack is the cherry-on-top for the build, boosting your critical-hit damage significantly as well as increasing your attack speed.

This is a defensive initiator build centered on setting up kills for your team by isolating targets using Submission, then following up with Close Combat. This build is especially effective when you are paired in a lane with an Attacker so it can follow up your moves with more damage.

Weakness Policy, Focus Band, and Buddy Barrier fit well into your tanky initiator gameplay, giving you increased damage, boosted defenses, survivability, and better team fight. Buddy Barrier, gives you a shield when you activate Machamp's Unite move, Barrage Blow. Try to make the most out of the move's first activation, chasing down targets first with Submission, and only activating it again to finish off targets or when enemies are lined up.

Potion synergizes well with the bonus HP you get from your items since HP recovery scales depending on the Pokemon's max HP. This gives you extra protection as your charge the enemy team to disable them. You can also equip Slow Smoke instead, giving you more crowd control to set up plays for your allies.

This is a high mobility build centered around pouncing targets using Dynamic Punch and Cross Chop. It also employs goal-stacking to get an extra advantage over the enemy team.

Attack Weight increases Machamp's overall damage output as you score goals. The item synergizes well with Score Shield, which helps the Pokemon score goals without being interrupted. Razor Claw provides a small critical-hit increase, improves your basic attack damage, and gives your basic attacks a movement slow effect after using your moves. It also works well with Attack Weight, increasing the minimum damage effect as you stack the attack stat bonus from the item. However, you can substituteScore Shield with Muscle Band if you are confident enough to score goals without protection.

Eject Button gives Machamp more mobility to chase down targets or get out of dangerous situations. This is especially useful for quickly retreating from an enemy goal zone before your opponent gets close. Alternatively, you can equip Full Healfor extra protection from being disabled.

The most effective build to play for Machamp. Thanks to their innate endurance and immunity to disables, Machamp's only problem will be having enough damage to kill a chosen target.

With this moveset combo, you ensure that you can get away from any bad situation and also have all the tools you need to catch up to enemies and stop them in their tracks.

Which Moveset Do You Think Is Best For Machamp?

How to Play Machamp

Force Engage Even On Early Levels 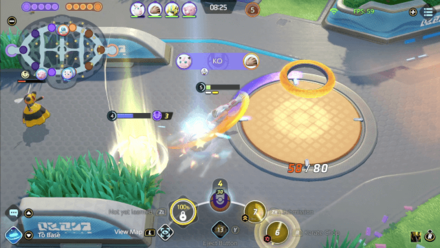 Machamp is a straight up fighter. It packs heavy firepower despite not being an attacker, and also comes with a bit of tankiness to him ensuring his survivability. A quick Chop together with Bulk Up can run down enemies early on so force fights against enemies that are far from their goal zones as much as possible.

Machamp is tanky but not as durable as defenders like Snorlax and Crustle. Even if Machamp ignores disables, the damage from attackers can still quickly whittle its HP down. Approach from the grass or flank to easily reach enemy attackers without suffering lots of damage while trying to get in range. Machamp is a melee fighter, so try to close the gap to your opponent as quickly as possible before pounding them with your combos. Your goal is to knock out the enemy, then score points while they're respawning.

Machamp can ignore the opponents' disables with Submission then jump straight to its targets. With empowered basic attacks and crits, bursting down targets is extremely easy.

Use Cross Chop together with Submission for Easy Engages

Submission is a buff and is not canceled by using a different move! Follow it up with a Cross Chop to dash through enemy ranks, then basic attack your key target while having the Submission buff to gain a huge amount of damage, critical chance, and attack speed while your target gets disabled for a few seconds!

Use Submission and Barrage Blow Buff Together

These two buffs when used in tandem, turn you into an unstoppable source of damage. It grants you a massive source of damage and attack speed. Don't useBarrage Blow just for the finisher, it has a lengthy buff so use it at the beginning of the fight!

Since Machamp can't usually be stopped by normal means because of Submission, the best alternative is to be evasive or be able to go to to toe and survive.

Even Matchups for Machamp

Even matchups are always a matter of skill, luck, and timing. Here are some tips to help push Machamp ahead against other Pokemon on equal footing.

Bait or Wait Against Mobile Pokemon

See more comments (22 Comments)
Opinions about an article or post go here.
Opinions about an article or post
We at Game8 thank you for your support.
In order for us to make the best articles possible, share your corrections, opinions, and thoughts about "Machamp Guide: Builds and Best Items" with us!
When reporting a problem, please be as specific as possible in providing details such as what conditions the problem occurred under and what kind of effects it had.