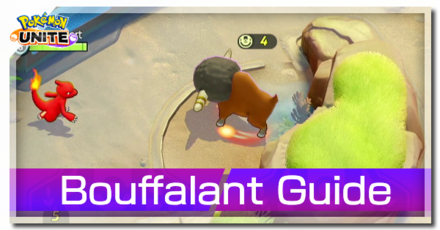 This is a guide on the Wild Pokemon Bouffalant in Pokemon UNITE. Read on to learn Bouffalant's spawn time, how and when to beat Bouffalant, what moves Bouffalant has, what buff and rewards Bouffalant gives, and more! 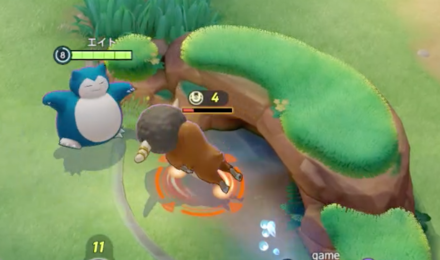 Bouffalant will spawn after 15 seconds when the match starts. It will appear near your team's base along either the Top or Bottom Lane of Remoat Stadium. Bouffalant's spawn location will be opposite to where Ludicolo will appear.

Take note that Bouffalant will spawn in the enemy's side of the map parallel to where it spawns in your team's side.

Bouffalant will respawn in exactly 60 seconds (1 minute) after it is defeated. It will always respawn wherever it was positioned when it first appeared in the map.

When you defeat Bouffalant, an Orange aura will be visible around your Pokemon. This indicates that Bouffalant's effect is active and will disappear when it expires.

It is important to note that the Aeos Energy gained from defeating wild Pokemon will be increased in the last 2 minutes of the match.

Is Beating Bouffalant Worth It?

Bouffalant's usefulness relies on how you can capitalize on its effect. Bouffalant's buff is very useful when it comes to ganking, as the added slow effect on your normal attacks makes it more difficult for your enemies to get away from you and easier for your allies to catch up to them. Overall, Bouffalant should be a high priority if you're constantly going for aggressive ganks.

How to Beat Bouffalant

Bouffalant is hardier than most wild Pokemon and can easily deplete your Pokemon's HP if you're not careful. It is best to defeat Ludicolo first to receive the damage bonus on wild Pokemon before fighting Bouffalant. This way, you can take out Bouffalant faster and avoid taking unnecessary damage.

Bouffalant should be captured by the Speedster or All-Rounder of the team that will take on the Jungler role as they can utilize Bouffalant's bonus effect better.

Defenders and Supporters shouldn not go out of their way to capture Bouffalant. It is best that they focus on the wild Pokemon located within the lanes.
All Pokemon UNITE Roles

When to Beat Bouffalant

Setting Up an Ambush

Before transitioning to a lane, Junglers can take advantage of Bouffalant's buff effects by slowing down melee Pokemon from getting to attack or hamper the movement speed of retreating enemies.

Attackers can also take advantage of Bouffalant's effect by inflicting slow on multiple targets quickly with the use of their ranged attacks.
List of All Status Effects

When Not to Go to Bouffalant

It is best to focus on defeating the wild Pokemon located within your lane and leave Bouffalant alone for the Jungler, especially at the start of the match. This will give them their initial experience to level up, and allows them to get the added slow bonus effect for their attacks which can be used to set up early ganks.

Bouffalant has strong, melee attacks that pack a punch. Ranged Pokemon can dish out damage while carefully positioning themselves around Bouffalant to avoid getting hit.

Boufflant braces itself then charges forward, damaging all Pokemon in its path while also knocking them airborne. This attack deals a significant amount of damage, so it is best to circle around Bouffalant and avoid standing in the way when the red target appears. You can also hit Bouffalant with an immobilizing attack or move (i.e. stun, freeze) to stop its charge.

In order for us to make the best articles possible, share your corrections, opinions, and thoughts about 「Bouffalant Buff and Spawn Time | Pokemon UNITE」 with us!