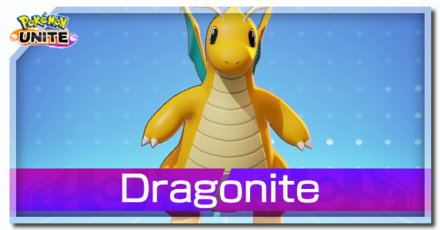 The best guide on how to play Dragonite in Pokemon UNITE for Nintendo Switch and Mobile. Check here for the best builds, Held and Battle items, movesets, as well as the latest nerfs, buffs, counters, matchups, and more!

The Best Build for Dragonite is the one with the gold crown!

This build utilizes Dragonite's ranged attacks to kite enemies using Dragon Dance and bursting them down with a fully-charged Hyper Beam. Remember that water-type boosted attacks reduce the cooldown of Dragonite's moves, utilize this to constantly use them. Although this build can be used in any lane, it's most effective in the jungle.

Muscle Band and Scope Lens enhances Dragonite's standard attacks through increased damage, increased attack speed, and critical-hits. Focus Band improves Dragonite's defenses and acts as a survivability tool for when the Pokemon is kiting its targets down.

The build's Boost Emblem loadout should consist of 6 Brown Emblems for maximum damage, 3 Red Emblems for a bit of Attack Speed, and 1 Emblem of any color. Equip Emblems that improve Attack or Critical-Hit Rate since Dragonite's damage will come mostly from its attacks and Hyper Beam. Sp. Atk and Movement Speed can be freely traded for the other stats.

This build is centered on isolating targets using Extreme Speed, then beating them down with Outrage. It's best ran in the jungle so that Dragonite can reach level 8 at fast as possible.

X Speed gives Dragonite the mobility to stay on top of its targets during Outrage while Extreme Speed is on cooldown.

The build's Boost Emblem loadout should consist of 6 Brown Emblems for maximum damage and 4 White Emblems for additional HP. Equip Emblems that improve Attack or Critical-Hit Rate to maximize Dragonite's attack damage during Outrage. Sp. Atk, Sp. Def, and Defense can be freely traded for the other stats.

This is a high sustain build that turns Dragonite into a dedicated melee brawler. It centers on beating targets down with Outrage while constantly using Extreme Speed to reset Multiscale's cooldown, which provides Dragonite a steady source of damage reduction as it fights.

Rapid-Fire Scarf gives a massive attack speed boost during Outrage, allowing Dragonite to get more hits before the move ends. Drain Crown is Dragonite's main passive source of sustain, giving its attacks an HP-recovery effect on each hit. Focus Band adds another layer of durability on top of Multiscale, inreasing Dragonite's defenses. It also serves as Dragonite's secondary source of sustain during intense fights, which increases its chances of survival.

X Speed allows Dragonite to stay on top of its targets as it pummels them down during Outrage. It's also Dragonite's sole escape tool should things go bad. However, X Attack also goes well with the build, increasing Dragonite's attack damage and attack speed, especially during Outrage. Slow Smoke can also be a fitting item, giving Dragonite a crowd control tool instead. It works well with Extreme Speed since Dragonite can activate it immediately after reaching the target.

The build's Boost Emblem loadout should consist of 6 Brown Emblems for maximum damage and 4 White Emblems for additional HP. Equip Emblems that improve Attack, Critical-Hit Rate, or HP to balance out Dragonite's offense and defense, especially during Outrage. Sp. Atk can be freely traded for the other stats.

Dragon Dance provides Dragonite with decent mobility and attack speed, pairing well with the cooldown reduction mechanic boosted attacks. On the other hand, Hyper Beam deals massive burst damage. But what's most notable about this moveset is their synergy, enabling Dragonite to amplify Hyper Beam's damage even more using Dragon Dance. A fully-amplified Hyper Beam can erase a huge portion of an enemy's HP or even wipe them out instantly if they're fragile and is extremely useful for stealing or securing boss Pokemon.

Dragonite's playstyle depends on whether you choose Hyper Beam or Outrage. Hyper Beam maintains Dragonite's ranged capabilities but offers a high burst damage tool. Outrage turns Dragonite into a melee brawler that has a special interaction with boosted attacks. When choosing Hyper Beam, Dragon Dance should always be its pair. On the other hand, you can be flexible when choosing a pair for Outrage.

Which Moveset Do You Think is Best for Dragonite?

How to Play Dragonite

Dragonite gets access to Multiscale and its primary damage move when it reaches level 8. This gives Dragonite a power spike in both offense and defense and allows it to properly engage in 1-on-1 fights. Get to level 8 as early as you can so you can snowball from there.

The safest and most efficient way to reach level 8 is to go to the jungle at the start of the game.

Dragonite's Dash moves will be key in getting you to the right position for your damaging moves. Once it reaches level 5, Dragonite will have access to 2 different dash moves: Extreme Speed is a good initiating move that can inflict stun to the target, while Dragon Dance increases both Dragonite's attack and movement speed. Plan ahead to what damaging move you are taking once getting to level 8 so you can fully take advantage of the extra mobility.

Change Gameplay Based on Chosen Moves

You have change your gameplay based on your chosen moveset to use them effectively. You should also consider the items you equip as they'll help you execute the gameplay better.

Kite and Burst Targets with Dragon Dance and Hyper Beam

Beat Down Targets with Extreme Speed and Outrage

However, should you go for Dragon Dance instead, the gameplay remains the same, although you can't isolate targets anymore. You'll also gain increased attack speed each time you use it, allowing for quicker knockouts.

Whichever you pick, remember to keep Outrage active by constantly landing attacks while sticking to your target.

Dragonite's Boosted Attacks improve as it evolves. Once fully-evolved, you gain all the Boosted Attacks from previous evolutions. Although you have no control over them, understanding their effects can give you an extra edge during fights.

Each time you perform a Boosted Attack, it reduces your moves' cooldown by one (1), allowing you to constantly use them in fights. This effect works great with Dragon Dance since the move increases your attack speed and also reduces its own cooldown when you attack. It also has great synergy with Outrage since all your attacks become Boosted Attacks, triggering their effects each hit.

Keep using Dragon Dance to amplify your moves' and standard attacks' damage output. Also, utilize the attack speed increase to attack continuously after using Dragon Dance and trigger its cooldown reduction mechanic, allowing you to use it more frequently and stack damage faster.

Using Dragon Dance will increase the damage output of Hyper Beam for around 3 seconds, it stacks up to 3 times. Be sure to hold off your Hyper Beam activation to get the most damage as possible.

Use Hyper Beam, a fully-charged one if possible, to secure objectives like Registeel. If you're trying to steal them from enemies, you need to time it properly since the move takes a bit of time to fire.

Draco Impact's unique aiming and recharge mechanics allows you to use it more freely than most Pokemon, making it effective in many situations. Taking advantage of these effects helps make a difference in your gameplay and effectiveness in the game.

Be Careful When you Activate Draco Impact

Once Draco Impact is activated, Dragonite will still be susceptible to attacks before it flies to the destination, making it possible to get knocked down as Dragonite channels the move. Given this, it's best to know when it's safe to use it.

Having a Buddy Barrier or Focus Band equipped will give Dragonite extra shields and defense to protect it before and after using Draco Impact.

You can increase Draco Impact's targeting speed by setting the Move Panel Sensitivity to High in the Controls Setting. This allows you to speed up Draco Impact's reticle speed when targeting opponents from across the map. It can also help you get out of tricky situations by using the Unite move as a escape mechanism.

Use Draco Impact to quickly travel towards enemy goal zones and score. This is especially useful during the last few minutes of the game where you need to score as many as you can before the timer ends.

You can also use Draco Impact to pick off or chase fleeing enemies, especially when they are low on HP. You don't need to knock out targets with the move itself, although it's possible, you just need to land as close as you can so you'll be able to chase them.

Although it's best to avoid using Draco Impact to escape, if it's crucial for you to stay alive, then you can use it as an emergency escape tool. However, you don't need to cast it to the max distance to escape, just enough to disengage from the enemies.

Dragonite takes a bit of time before it can reach its power spike at level 8. Most of Dragonite's hard matchups take advantage of this by beating it in terms of damage output. Dragonite also struggles against crowd control moves that can disrupt its flow of damage, especially when using Outrage.

Even Matchups for Dragonite

While weak early on, Dragonite can get the upper hand against these Pokemon if it reach level 8 as fast as possible, and successfully perform its combos.

Get Ahead in Levels

Bait Out Their Moves

Easy matchups are Pokemon that have no effective means of stopping or escaping Dragonite's combos.

Get Close and Burst Them Quickly

Shred with Attacks and Moves

In order for us to make the best articles possible, share your corrections, opinions, and thoughts about 「Dragonite Guide: Builds and Best Items | Pokemon UNITE」 with us!