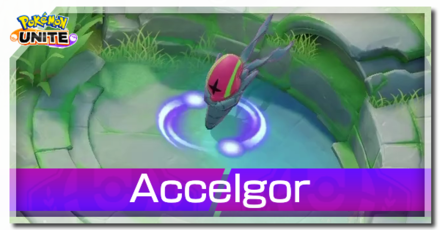 Accelgor is a Wild Pokemon that provides a buff in Pokemon UNITE. Read on to know what buff Accelgor gives, its spawn time, spawn locations, how to effectively take the buff, and more!

When you defeat Accelgor, a Purple aura will be visible around your Pokemon, indicating that Accelgor's effect is active and will disappear when it expires.

Accelgor's points increases to 7 during the last 2:00 minutes of the game.

Is Beating Accelgor Worth It?

Players should definitely take out Accelgor every time it spawns, or at least when they come across it, especially for junglers. The 10% cooldown reduction you get from its buff will help you clear out wild Pokemon faster, speeding up your leveling and giving you faster access to more powerful moves. 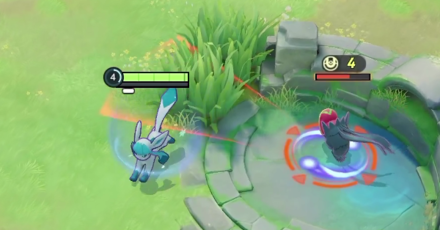 Accelgor will channel its special attack facing your direction once you attack it. Once you see it channeling, take advantage of that time window to get some attacks in and avoid the move. However, if your Pokemon has moves that can stun targets, you can simply use it to stop Accelgor from channeling the move.

If you're using a ranged Pokemon, you can go behind the wall and attack it from there, making it easier to avoid its move and preventing it from attacking you. 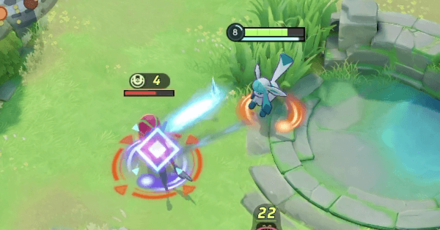 Defeat Accelgor as soon as it spawns to get its buff, especially if you're a jungler. Doing so gives you a decent amount of EXP and makes taking wild Pokemon camps easier because of the buff.

Steal Accelgor from the Enemy Jungle

If you see an opportunity to steal Accelgor from the enemy jungle, don't hesitate to do so. Not only will you gain EXP and Aeos Energy, you'll also deny the enemy Jungler the buff and slow their farming progress.

Accelgor has melee attacks that deal decent damage, especially during the early game. Be sure to defeat it as quickly as you can to minimize the damage you take.

Accelgor has a strong, wind blast attack that looks a lot like Bug Buzz. It deals a considerable amount damage and pushes you back when it hits. When pushed to the wall across Accelgor's camp, your Pokemon can get stuck and take the full damage of this move.

You can easily dodge this attack by moving away from where Accelgor is facing when it channels the move. The move's area of effect is denoted by a red cone.

In order for us to make the best articles possible, share your corrections, opinions, and thoughts about 「Accelgor: Spawn Time, Buff, and Information | Pokemon UNITE」 with us!