Eject Button Effect and How to Get | Pokemon UNITE 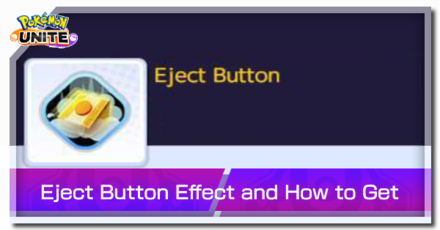 Cooldown increased from 55 seconds to 70 seconds

The beloved Eject Button has suffered a nerf in the 1.1.1.6 patch, increasing its cooldown to 70 seconds. That said, due to its one-of-a-kind ability, it's unlikely that Eject Button will disappear from the metagame even with the change.

How to Get Eject Button

When to Use Eject Button

If you are using a Pokemon with access to moves with stun or immobilizing effects such as Garchomp or Snorlax, then the Eject Button may be just the tool you need to close the distance suddenly and quickly to land these Moves and allow your team to follow-up on your attacks.

Getting Out of a Fight

Alternatively if you're caught in a tight spot, you can use the Eject Button to make a quick getaway from your opponents. Take note that while the Eject Button's range is limited you can still use it to go over walls if the distance is just right, so use this to your advantage.

Lastly, Eject Button can also be used to chase down retreating opponents with low HP so you can deal the finishing blow. Be careful though, if you chase them far into enemy territory, you may not be able to use Eject Button for escaping.

How to Use Eject Button Well

Using Eject Button in front of a wall will let you go through them. Take advantage of this by doing surprise attacks in lanes, or make it more difficult for the opponent to chase you!

Note: You cannot pass through walls that are wider than the targeted distance of the Eject Button.

The Eject Button can also slip through obstacles created by enemy Pokemon such as Rock Tomb or Light Screen. Whenever you are trapped by Pokemon moves, use it without hesitation to escape from the pinch.

Additionally, it can also be used to escape from range attacks such as Electro Ball, Shadow Ball, or Sludge Bomb, to name a few. However, since the Eject Button has a relatively long cooldown time of 55 seconds, it is recommended to reserve Eject Button for dire situations.

Post (0 Comments)
Opinions about an article or post go here.
Opinions about an article or post
We at Game8 thank you for your support.
In order for us to make the best articles possible, share your corrections, opinions, and thoughts about "Eject Button Effect and How to Get" with us!
When reporting a problem, please be as specific as possible in providing details such as what conditions the problem occurred under and what kind of effects it had.