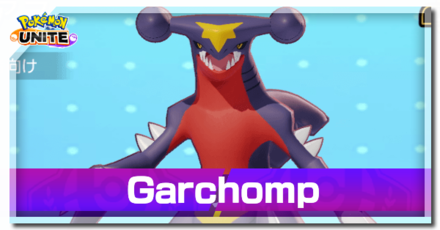 The best guide on how to play Garchomp in Pokemon UNITE for Nintendo Switch and Mobile. Check here for the best builds, Held and Battle items, movesets, as well as the latest nerfs, buffs, counters, matchups, and more!

The Best Build for Garchomp is the one with the gold crown!

This is a similar build to the previous one but does not rely on critical hits and is more defensive. Its purpose is to give Garchomp enough durability and survivability to trigger the effects of its boosted attack. Dragon Rush and Dragon Claw serve the same purpose as the previous build, acting as a catalyst to your boosted attacks.

Eject Button serves the same purpose as the previous build.

This is a defensive build centered around initiating fights using Dig and following up with Earthquake, making Garchomp into a frontline initiator.

This build utilizes Dragon Rush and Dragon Claw as enablers to Garchomp's boosted attack effects and critical hits, allowing you to burst down targets quickly with fast attacks.

Eject Button serves as an additional gap closer or an escape tool.

Dragon Rush allows Garchomp to initiate fights while having a strong entrance. Following it up with a Dragon Claw allows Garchomp's to start stacking its Boosted Attack meter. Enemies caught in the barrage of attacks will be dealt heavy damage.

Garchomp can either be built as a standard attack damage dealer or an initiator. If you choose the first one, it's best to go for Dragon Rush and Dragon Claw. If you're more into initiating fights, opt for Dig and Earthquake.

Which Moveset Do You Think is Best for Garchomp?

How to Play Garchomp

Garchomp is an All-Rounder Pokemon that can act as a tank, crowd controller, and a decent damage dealer. Garchomp can easily jump into the fray and start fights as well as survive long enough to be the main tank of the team. 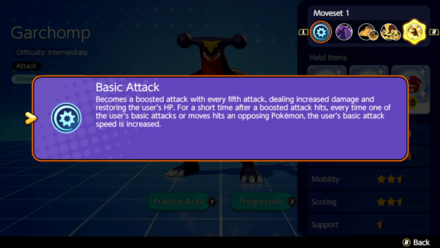 The game clearly states that Garchomp's every fifth auto-attack becomes a Boosted Attack and restores its HP. This is inaccurate as Garchomp's auto attacks gain more damage and bonus damage based on the enemy's max HP on every hit after reaching 5 stacks. To top it off, you also heal for the same amount of the damage dealt by your passive. This makes Garchomp extremely good at taking objectives solo and fighting against tanky Pokemon like Snorlax. 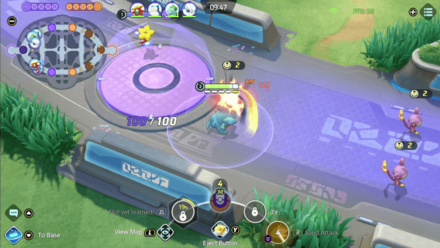 Sand Attack is a debuff move that restricts enemy vision, but that doesn't mean that it's useless against farming Wild Pokemon. Though it may not have direct damage compared to Bulldoze, Sand Attack grants an attack speed buff to Garchomp, making it easier to stack up towards a full Boosted Attack to speed up the damage.

Learn the Dragon Combo for Burst, and Dig + Earthquake for AOE Damage 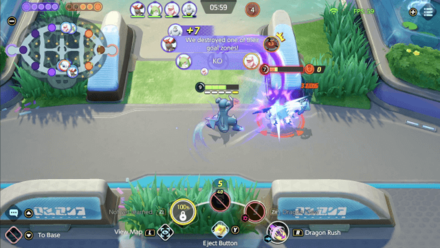 Choosing the skills you need is critical to how fights will play out. Dragon Claw + Dragon Rush is a good dueling tool that has more range and damage but focuses more on damaging single targets. Dig + Earthquake, on the other hand, is a quick knock-up skill that is easily followed up by area damage that gains a Slow later in the game. 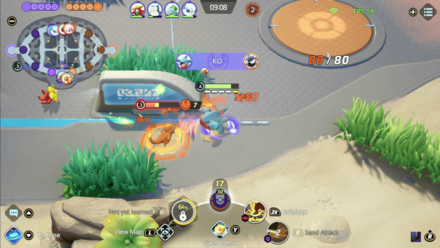 Garchomp can easily take on other Pokemon that are easy matchups. Thanks to its passive ability, Rough Skin, Garchomp can take and give a beating towards opponents - especially if you can sustain its basic attacks. Just make sure to save a Dragon Rush for pursuit or a quick getaway. 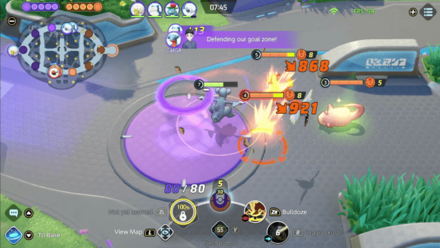 Garchomp gains an attack speed boost when he lands a skill or an attack on an enemy. This makes his damage ramp up during a duel, so try to force long trades against enemies to maximize your buff. 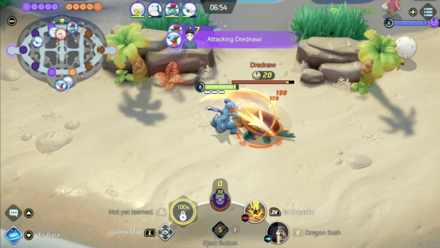 While taking on Boss Pokemon alone is risky, if enemy attention is focused somewhere else, don't hesitate to go for it! Your durability, damage, and sustain are enough to easily take these objectives early on.

Farm Wild Pokemon to Heal Up

Remember that Empowered auto attacks are AOE (area-of-effect), so you can lifesteal across multiple Wild Pokemon like in this clip.

Aside from increasing his attack speed, Garchomp's boosted attack also heals him for a small amount. This slowly stacks up on prolonged fights so instead of going back to base, try farming wild Pokemon to heal up!

Point Your Move Stick to Target When Using Unite Move

Garchomp's Unite Move may feel shaky, but its ability to turn and aim is rather easy. Just remember to point your analog stick to your desired target at all times and Garchomp will easily turn around in that direction, even if it's a complete 180-degree turn. The dashes also cover a bit of distance so you can also use them to chase enemies!

Since Garchomp is a melee Pokemon and has low mobility, it can easily be kited by hard-hitting ranged Pokemon or outplayed by high mobility Pokemon.

Even Matchups for Garchomp

Even matchups are always a matter of skill, luck and timing. Here are some tips to help push Garchomp ahead against other Pokemon on equal footing.

Take Advantage of Their HP

I Give What I Take

Pokemon who are squishy and you can instantly burst down is your ideal targets. Especially if their skills make them immobile.

Easy Targets to Focus Down

Claw Your Way Through

See more comments (29 Comments)
Opinions about an article or post go here.
Opinions about an article or post
We at Game8 thank you for your support.
In order for us to make the best articles possible, share your corrections, opinions, and thoughts about "Garchomp Guide: Builds and Best Items" with us!
When reporting a problem, please be as specific as possible in providing details such as what conditions the problem occurred under and what kind of effects it had.