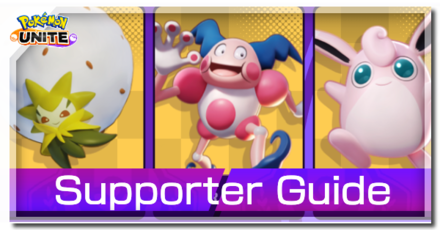 This is a guide on how to play the Supporter Role in Pokémon UNITE. Read on to learn how to play Supporters, their strengths and weaknesses, the best lanes, as well as the best Supporter Pokemon!

How to Play Supporter

Supporters are most effective when they stick with their allies throughout the game since they can't do much alone. Supporters make plays by shielding their allies with helpful buffs or disrupting enemies during battles.

Keep an Eye on Your Teammates

Teamfights tend to get messy often, and as a Supporter, your job is to provide your utility to those who need it the most. Keep an eye on your teammate's health as well as the enemies' locations during a team fight, so you can adjust your healing and/or debuffing accordingly.

It is important to preemptively bolster your teammates before a clash happens as most players use their moves as soon as they see a target. You should always know when to stay back or get close to a fight to increase your chances of surviving when things get out of hand. 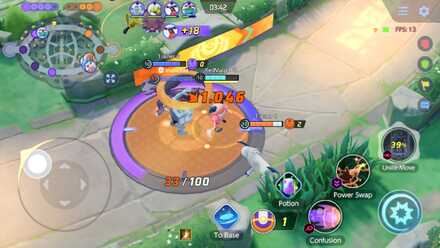 Supporters function more effectively when paired with other teammates as most of their kits revolve around providing aid and support. Since Supporters generate a lot of extra advantages for the team and can transition well later when they have strong enough abilities to buff and debuff accordingly, they are often high-priority targets that are susceptible to being ganked. 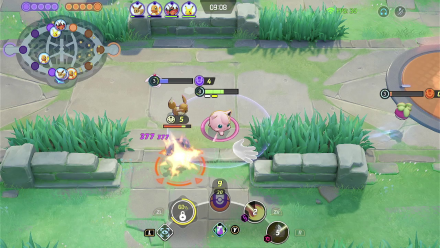 Although it is generally advised to get level up as fast as possible to get to your move upgrades, it is important for Supporters to let their teammates level up first before they do. This means that you should give the last hit when farming Wild Pokemon to your allies so that they can get the full amount of EXP. Supporters usually have great early game moves that are enough to sustain themselves and their allies. So, EXP should be given to an Attacker or an All-Rounder so they can get powerful quickly.

Exp. Share is a great Held Item for Supporters as it helps you properly distribute EXP to your allies. On top of that, you will get a bonus to Movement Speed, which allows you to improve your positioning whenever there is a team fight. 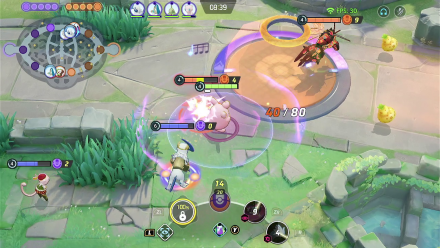 As much as possible, when an ally is being targetted, diverge the enemies' attention by putting yourself in front of them, giving your ally time to escape.

Among the roles, it's always the Supporter's job to sacrifice itself to save an ally since they can't do much without an ally to support. Saving the team's damage dealers is the Supporter's top priority.

Top Lane supporters should utilize moves that hinder the opponent from scoring goals. It is good to help your lane partner zone out your opponents with debuffs for early lane dominance, especially for contesting Regieleki.

Supporters can help reinforce teammates with buffs or recover lost HP in early clashes with the opposing team. Bottom Lane supporters need to help their lane partner farm experience as fast as possible to maintain level parity with the opponent.

While Supporters can't deal heavy damage, they provide shields and buffs for their allies and inflict status effects. Their moves range from healing allies and giving them buffs, to inflicting opponents with debuffs that temporarily lowers their stats and throw off their killing streaks.

Supporters have low HP and can easily fall in battle when they get focused down. They mostly rely on moves that hinder enemy movement to get out of dangerous situations.

The damage output and scoring capabilities of Supporters are not the best compared to other roles. They shine the most in contributing to the overall offense of a team, but ultimately lose to other roles in terms of dealing damage.

Supporters are Pokemon that primarily focus on assisting teammates throughout a game. They perform this task through a variety of methods such as applying heals and buffs for allies, or by inflicting status debuffs on enemies.

Why Should You Play Supporter?

The Supporter role is perfect for granting advantages and opportunities for your teammates to capitalize on. Like in other MOBAs, they are equipped with abilities that allow their teammates to gain the upper hand by either enhancing their damage output, or keeping them alive for longer. Successful clashes are often determined by how effectively the supporter can give their team an edge during lane fights and big pushes later in the game.

In order for us to make the best articles possible, share your corrections, opinions, and thoughts about 「Supporter Guide: How to Play Supporters | Pokemon UNITE」 with us!