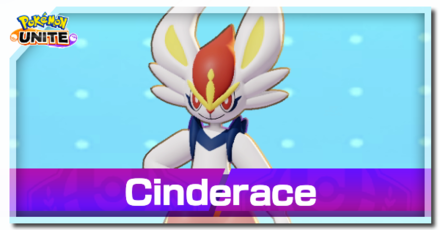 The best guide on how to play Cinderace in Pokemon UNITE for Nintendo Switch and Mobile. Check here for the best builds, Held and Battle items, movesets, as well as the latest nerfs, buffs, counters, matchups, and more!

The Best Build for Cinderace is the one with the gold crown!

This build focuses on making Cinderace into a late-game damage powerhouse, mixing damage and mobility via Blaze Kick and Flame Charge. If the opponents have a lot of Sure-hit disabling moves, Cinderace can learn Feint instead to have a decent protection against those type of moves. It can fit in any lane, but taking the jungle would be the most effective.

Muscle Band increases Cinderace's attack damage through its HP-based bonus damage effect and boosts its attack speed slightly. Rapid-Fire Scarf adds some more static damage and attack speed, but its primary purpose comes from its massive attack speed boost effect. It also works well with Muscle Band's HP-based effect, increasing Cinderace's DPS via its attacks. Drain Crown provides a decent amount of HP and damage, and it allows Cinderace to recover HP with each Standard Attack. It also has great synergy with the Pokemon's passive, Blaze, since Cinderace's attack speed and critical-hit rate increases when it's low on HP. The HP-recovery from item coupled with the effects from Blaze increases Cinderace's chances of survival when it's low on HP.

However, if Cinderace struggles to stay alive even with the HP recovery effect, replace Drain Crown with Focus Band instead. Alternatively, Drain Crown can also be replaced with Scope Lens for more damage through critical-hits, turning the build into a full-on offense build.

X Speed adds more mobility to Cinderace. It's useful for both chasing enemies or escaping.

The build's Boost Emblem loadout should consist of 6 Brown emblems for maximum damage and 4 White emblems for additional HP. Equip Emblems that increase Attack, or Critical-Hit Rate to maximize Cinderace's damage output, particularly from its basic attacks. Sp. Atk, Sp. Def, and Defense can be freely traded for any of the other stats.

This is an updated version of Cinderace's first widely-used build that uses Pyro Ball and Feint. It has a good balance of offense and defense that can be used in any lane. Cinderace will mostly rely on pure attack speed to dish out damage while Pyro Ball acts as a secondary source of damage.

Muscle Band provides a decent boost to Cinderace's attack damage and attack speed. Rapid-Fire Scarf doubles Muscle Band's bonuses but gives a massive attack speed boost on its own. Focus Band is the ideal defensive item for the build, increasing Cinderace's static defenses and giving it a reliable survivability mechanic via its effect. These three items synergize well with Blaze, turning Cinderace into an attack speed and critical-hit machine when it's low on HP.

The build's Boost Emblem loadout should consist of 6 Brown emblems for maximum damage and 4 White emblems for additional HP. Equip Emblems that increase Attack, Critical-Hit Rate, or HP to balance out Cinderace's offense and defense. Sp. Atk, Sp. Def, and Defense can be freely traded for any of the other stats.

X Attack acts as the final layer of damage through amplification and increased attack speed.

The build's Boost Emblem loadout should consist of 6 Brown emblems for maximum damage and 4 White emblems for additional HP. Equip Emblems that increase Attack, or Critical-Hit Rate to give Cinderace more damage. Sp. Atk, Sp. Def, and Defense can be freely traded for any of the other stats.

Try to fully stack Attack Weight as soon as possible. Consider just scoring minimum points in the early-game to ensure a faster progression.

Cinderace is all about lining up shots and melting opponents with its fast auto attacks. Replacing Flame Charge with Feint is ideal for a more defensive, anti-burst moveset. Meanwhile, going for a more mobile moveset will have you choose Flame Charge and Blaze Kick.

Which Moveset Do You Think is Best For Cinderace?

How to Play Cinderace

Cinderace is a rather late-blooming Pokemon similar to Gardevior. Cinderace evolves at Lv. 5 but does not get its first move upgrade until Lv. 7. Prioritize farming and keep your distance in team and objective fights before the first power spike at Lv. 7.

Play as a Jungler

The best way to safely level up to level 7 is to take on the jungler role, allowing you to get all the experience from the jungle camps.

Team Up with Defenders or All-Rounders

Teaming up with sturdy Defenders like Snorlax or Crustle will help to ensure a successful early game as you farm EXP. Otherwise, partnering up with a high crowd control Pokemon like Lucario or Slowbro will allow for safer engagement with enemy Pokemon and safer KOs.

Watch Out for High-Burst Pokemon

Be careful when going against high-burst Pokemon like Gengar as they can quickly burst you down and take you out of the fight even at full HP.

In team fights, using the Lock-On Skill as well as Advanced Controls is crucial for an auto-attack-heavy character like Cinderace. This allows you to focus on only one target or avoid attacking the nearest enemy approaching you while leaving critical HP enemies behind. It also allows you to choose the enemy you wish to snipe with Blazing Bicycle Kick by scrolling the target wheel first to your desired target.
List of Settings and Best Settings to Use

Although it's subtle, Blaze contributes a lot to Cinderace's offense. It's important to know how it works and what you need to do to utilize its effects.

Get Boosted Attacks by Using Moves

Your attack instantly becomes a Boosted Attack each time you use a move, allowing you to spam them. Always follow up with a Boosted Attack after using a move to take advantage of the effect.

Fight Through a Brawl at Low Health

When Cinderace's HP reaches 50% or lower, its attack speed and critical chance increase. In some cases where you have low health while facing an opponent, it is best to push through and take advantage of the increased damage output to knock down the opponent instead of retreating.

However, it is important to play strategically and not overextend looking for KOs. Avoid deliberately letting your HP down dangerously low to get the bonus damage all the time.

It is important that you always maintain a respectable distance between you and your opponent - not to close to get hit, but not to far to get out of range.

Secure Objectives for Your Team

Being a hard-hitter, Cinderace can secure boss Pokemon like Rayquaza quickly, even by itself. Be sure secure objectives for your team either by helping them take it or doing it by yourself.

If necessary, use Blazing Bicycle Kick to secure objectives for your team.

Although Cinderace is a hard-hitter, it is nonetheless fragile to high burst damage. It relies heavily on attacking at long range, which makes Pokemon that have the means to get close to Cinderace a great counter.

Even Matchups for Cinderace

Because of Cinderace's low Hp and defense, make sure to play it safe and keep your distance when fighting these Pokemon. For a better chance of winning fights, it is best to get the EXP you need during the early game to level up and learn your move upgrades before you engage with these Pokemon.

Bait Out their Burst Moves

Pair Up with an Ally and Pressure

Burn Through the Sturdiness

Take advantage of Cinderace's high mobility to maneuver around your targets and deal with fast Standard Attacks.

Suppress Before they Get Close

See more comments (62 Comments)
Opinions about an article or post

In order for us to make the best articles possible, share your corrections, opinions, and thoughts about 「Cinderace Guide: Builds and Best Items | Pokemon UNITE」 with us!