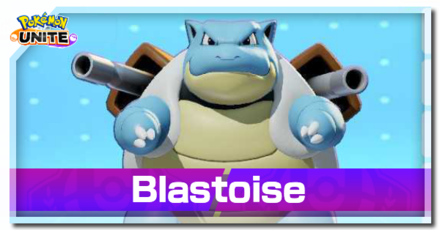 The best guide on how to play Blastoise in Pokemon UNITE for Nintendo Switch and Mobile. Check here for the best builds, Held and Battle items, movesets, as well as the latest nerfs, buffs, counters, matchups, and more!

The Best Build for Blastoise is the one with the gold crown!

This build is centered around the Water Spout and Rapid Spin combo, dealing high AoE damage. Play as safely as possible until you have Rapid Spin since that is your primary source of damage. You can start to get aggressive whenever your Unite Move is available, but make sure to hit as many enemies as possible to make the most out of it.

Eject Button goes well with Rapid Spin and Hydro Typhoon, giving you an initiation and escape tool to work with.

Your Boost Emblem loadout should consist of 6 Green Emblems to maximize your moves' damage and 4 White Emblems for additional HP. Equip Emblems that improve Sp. Atk or HP since the build focuses on maximizing the Rapid Spin-Water Spout combo. You can freely trade Attack, Critical-Hit Rate, and Movement Speed.

This build focuses on disabling opponents with Blastoise's crowd control moves while also contributing to the team's overall offense. Use Hydrp Pump and Surf to engage opponents and open up opportunities for your allies to land their moves.

Combining both Wise Glasses and Choice Specs increases Blastoise's Sp. Attack stat by a significant amount, allowing the Pokemon to deal more damage as it engages in fights. Buddy Barrier is your primary defensive item, providing extra shields as you cast Hydro Typhoon.

Eject Button serves as a repositioning tool so you can better land your moves. For a more consistent way to increase your mobility, use X Speed instead.

Your Boost Emblem loadout should consist of 7 Black Emblems for maximum cooldown reduction, 2 White Emblems for a bit of HP, and 1 Emblem of any color. Equip Emblems that improve Sp. Atk. or HP since you'll either want to deal more damage or be more durable while providing crowd control. You can freely trade Attack, Critical-Hit Rate, and Movement Speed.

This build centers around turning Blastoise into a walking fortress for pushing lanes. Combining Rapid Spin with Hydro Pump allows you to push back opponents while you are spinning. This gives Blastoise a more tanky role that soaks most of the damage as the team pushes lanes.

Wise Glasses gives Blastoise more firepower as it engages in fights. Focus Band and Buddy Barrier, on the other hand, provide all the durability, survivability, and utility you need to be an effective Defender for your team.

Eject Button serves the same purpose as the previous build, acting as a repositioning tool.

Your Boost Emblem loadout should consist of 2 White Emblems for a bit of HP, and 4 Blue and Purple Emblems each for better defenses. Equip Emblems that improve HP, Defense, or Sp. Def since you want to be as durable as possible for the build. You can freely trade Attack, Critical-Hit Rate, and Movement Speed.

With the meta reverting to the traditional objective-based gameplay, the Water Spout and Rapid Spin combo has become viable once again. Furthermore, the buff to Rapid Spin allowed Water Spout to be cast for the entire duration instead of lasting for a while, dealing more damage as a result.

Which Moveset Do You Think is Best For Blastoise?

How to Play Blastoise

Setup Knockouts in the Early Game

Use Skull Bash and Water Gun in the early game to set up knockouts. The best way to execute this is by using Skull Bash to quickly go behind your targets, then pushing them back with Water Gun.

Try to reach level 7 as soon as you can so you can access your full moveset. Don't get too aggressive in the early game, and only fight if you have an advantage over your opponents. Focus on defending your goal zone, farming wild Pokemon, and scoring points if given chance.

Blastoise's Boosted Attacks will reduce your move cooldowns by 1 second per use. This will still play in effect even if no enemies are nearby! If your moves are down and a crucial fight is about to happen, don't hesitate to fire some empty attacks in the air to reduce your moves' cooldowns.

Change Playstyle Based on Moveset

Blastoise generally has two playstyles; a traditional tank or an Sp. Atk damage dealer. These playstyles depend on which moveset you chose. Knowing and understanding how these move combinations work together allows you to play the Pokemon more effectively.

Get Aggressive with Rapid Spin and Water Spout

Rapid Spin and Water Spout turns Blastoise into an AoE damage dealer, especially when used together. If you're going with this move combination, you need to be aggressive once you have them both. Aim for squishy targets like Pikachu as you can potentially knockout them out within the duration of Rapid Spin. You can also try to steal objectives like Regieleki from the enemy.

Surf and Hydro Pump allow you to displace and control enemy movements. You can shove targets towards your team or zone them out entirely from areas. You can also set up fights and make it easier for your allies to follow up with their moves.

Save Hydro Typhoon for Teamfights

Hydro Typhoon is one of the best teamfight move in the game thanks to its wide AoE, stun, and damage. Try to save Hydro Typhoon only for teamfights as much as possible as it'll give you and your team a better chance in winning the fight. Morever, it's best to use it at the start of the fight rather than as a finisher.

Use Eject Button for Better Positioning

You can use Eject Button to get a better position and use Hydro Typhoon. You can either use it before Hydro Typhoon or during it.

Eject Button Effect and How to Get

This set of combos takes advantage of Rapid Spin to deal consistent damage while also having hindrance resistance.

Pokemon that can deal consistent damage and have mobility can counter Blastoise. Additionally, Pokemon that have means of dodging and escaping Blastoise's moves are also effective, allowing them to keep their distance while dealing damage to Blastoise.

Even Matchups for Blastoise

What makes the Pokemon effective against brawls is that most of its moves can dish out crowd control on top of its high Sp. Attack damage. Be wary, however, of Blastoise's long move cooldowns.

Fight Through the Disables

Put Them in a Bad Position

Fight through the Sustain

Not Enough to Burst Down Blastoise

Take advantage of Blastoise's high defense and decent damage to pressure your opponents.

Low Offense to Stave Off Blastoise

In order for us to make the best articles possible, share your corrections, opinions, and thoughts about 「Blastoise Guide: Builds and Best Items | Pokemon UNITE」 with us!